A History of Art in Three Colours: Blue

I was very much looking forward to this new BBC4 series, which explores how, in the hands of artists, the colours gold, blue and white have stirred our emotions, changed the way we behave and even altered the course of history.

I missed the first episode, which was 'Gold' - rather irritating as gold is a precious metal rather than a colour, so somewhat went against the premise of the title.

However, last night was 'Blue'

It started with Dr James Fox bobbing about on the Venetian lagoon with a big lump of lapis lazuli, the exotic blue stone like a piece of the sky itself, that changed how art looked.

Previously, blue didn't feature much in art or language.  Colours were made from earth pigments, so art was rather brown.  There was an interesting segment where Dr Fox watched a piece of lapis being made into pigment, and the huge effort and time (up to 2 weeks)  that goes into grinding the very hard stone and processing the colour.  Perhaps the most striking image of the whole programme was when he then held up a small bottle of the finished product, a mesmerising ultramarine - intense, bright, pure and strong.

Then is was off to Padua, to see the Giotto frescoes in the Scrovegni Chapel, one of the most important rooms in the whole of Western art, and a hymn to the colour blue.

I've visited the chapel in the 80s, when you could just walk in off the street, and take as much time as you liked to look at the paintings, while the sun beat down outside and you could hear the sound of the swifts.  I revisited in 2004, having driven to Italy in my mini, and this time, you had to book in advance for a timed ticket.  The chapel has been restored, and is all climate controlled, so you have to wait in a sealed room before proceeding into the chapel for your allotted 15 minutes with the frescoes.  It doesn't make for relaxed viewing.

Giotto used lapis lazuli blue on the ceiling vault (and what a fortune that must have cost) to depict Heaven itself.  Thus you are standing up and looking right into another world, with the Virgin Mary, Jesus and saints.  The colour thus becomes emblematic of the divine. Blue became the colour of Mary, and began to be controlled by the Church, who maintained its high price and coralled its use.  Two hundred year later, however, Titian defied the convention, and Dr Fox looked at the restored Bacchus and Ariadne in the National Gallery in London. 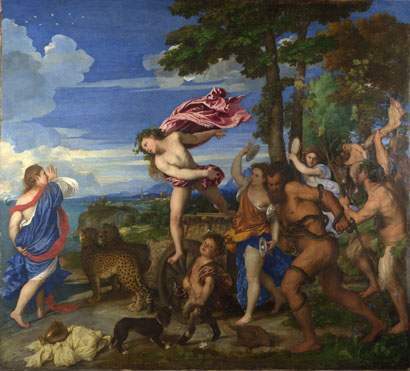 Titian, Bacchus and Ariadne (Oil, 1520)
If you take a diagonal from top right to bottom left, half the painting is blue - costing a fortune to make.  It's not a biblical subject, and Ariadne is wearing the Virgin's colour of blue robes.  How exactly Titian got away with incurring the wrath of the church wasn't really explained.

Then it was on to Picasso, via a rather strange and unclear bit about Romantics and flowers.  In any programme about art history and the colour blue, you have to talk about Picasso and his Blue Period.

"What was the event that triggered Picasso's Blue Period?" mused Dr Fox.  Well, it was the death of Picasso's friend Casagemus, wasn't it?  Woah, not so fast!

And this is what began to annoy me about the programme.  Dr Fox takes a very, very long time to make an obvious point, when a bit of judicious editing would make the whole programme more to the point and less about the presenter.

And so we had the mean and moody monochromatic Dr Fox, in crisp white shirt, black tie and jacket and black hipster jeans, slouching about a train in a recreation of his Inter-railing youth on a trip to Paris.  Then he was wandering about Paris with some arty camera work.  Then he was in a bar.  All this to get across the point that Picasso and his best pal Casagemas went to Paris, where Casagemas killed himself.  It took an age.  I understand that not everyone might be familiar with Picasso and his story, but it still took an eternity.

Finally, we got to see a few paintings.

And then we also had the opinion of a Jungian psychoanalyst thrown in, that Picasso was schizophrenic.  Which didn't sound much like Picasso at all.

Next it was Yves Klein, who actually invented his own colour (International Klein Blue) with the help of pigment specialist Edouard Adam.  The way you do.  Here is one of his textural all-blue paintings in his very own colour.

There was a lot about Mr Klein (such as his love of judo), which would again have benefitted from editing, as it didn't really add anything to the main thrust of the programme, which was meant to be an exploration of the colour.

Thus we got a baffling segment about a photo of Klein throwing himself out of a first floor window and taking a photo of the act (with Dr Fox climbing up a concrete pillar on the spot where the incident took place in order to make some sort of point - mostly that he's rather fit and flexible).  It wasn't made entirely clear what the outcome of the incident was or why it got such a prominent mention in the programme.  Again it was almost as if it was included in order to inject some drama and some sort of action sequence for the presenter.

Anyway, I think what he was getting across was that the point of Yves Klein was to do with blue being a liberating colour (it was the 60s after all), a colour that opened the windows to freedom and the great blue beyond where you could leave your earthly existence behind.  Except the photo was faked.  And wasn't blue.  It was all a bit muddling.

Which took us to the Most Annoying Bit of the whole programme.  A trip to Austin, Texas, to talk to a Saturn 5 astronaut.

Because Dr Fox had travelled all the way to Austin, Texas, and had sought out a real, live Saturn 5 astronaut, there was a long segment where we heard about the mission, where the astronaut repeated himself about the Cold War space race and described the rocket engines shaking him about, and how he nodded off at one point.  All very well, but detail we didn't really need to know about in the context of an art programme, because you could see with crystal clarity where we were being taken, and the whole narrative story arc that was about to clunkingly be made.

At the start we had Giotto with his other worldly blue of heaven.  This astronaut guy was the one who took the photo of Earth as a blue planet.  So blue is actually also the colour of home, and of Earth.  Get it?  Except, it wasn't an artist that was being interviewed, it was an astronaut, and it was a scientific photograph taken as part of his work, not a creative artwork.  The title of the series is "A History of Art", and this final conclusion didn't actually involve an image from the history of art at all.  Ok, so it was a very influential image.  But it isn't art, because it wasn't made by an artist.

So that really, really annoyed me.

I really can't engage with Dr James Fox at all, and his presenting style.  I really want to, but I just can't.  I want someone who really speaks to me, not tells me how clever they think they are.  Just in the way that his whole outfit and persona should add up to him being one groovy, fit guy, it just kind of doesn't.  Similarly, the programme involves lots of exotic places, and hip camera work and on-the-spot re-enactments, but it somehow doesn't hit the mark.  It's not 'come with me on this journey' it's 'look at me'.  It's just not as insightful or as instructive or intelligent as it could be, and good art programmes are so rare that I really wanted this to be insightful and instructive and intelligent.

For a series that's meant to be about the emotion of colour and the passion of art history, it's all rather cold.  You can see the end point of the arguments way before they happen, and they take a maddeningly long time to finally arrive, via a whole load of extraneous whoffle that really should have hit the cutting room floor. It's frustratingly less than the colourful sum of its parts.

If we had time for astronauts, why didn't we have time to look at the science of the colour blue?  Why is it so intense?  How does it work on our eyes optically?  How does it act on our brains?  Why are Georgian libraries and reading rooms painted blue?  (Blue makes it easier to see printed word.)  Why are motorway signs blue with white lettering? (Ditto.)  Why do painters go to St Ives? (It's the intense blue light, which makes everything clearer and more beautiful, due to the reflection of light and the sky and the curve of the bays with the sea.  And they have good fish and chips.)

In short, it's a series that needs to be a whole lot less Foxy and more carefully thought out in order to actually be "A History of Art in Three Colours".

Colour?  It just doesn't quite do what it says on the tin.


View the episode on BBC i-player here.
Posted by Judith at 05:03