You can view all the paintings in my exhibition online now by clicking HERE. 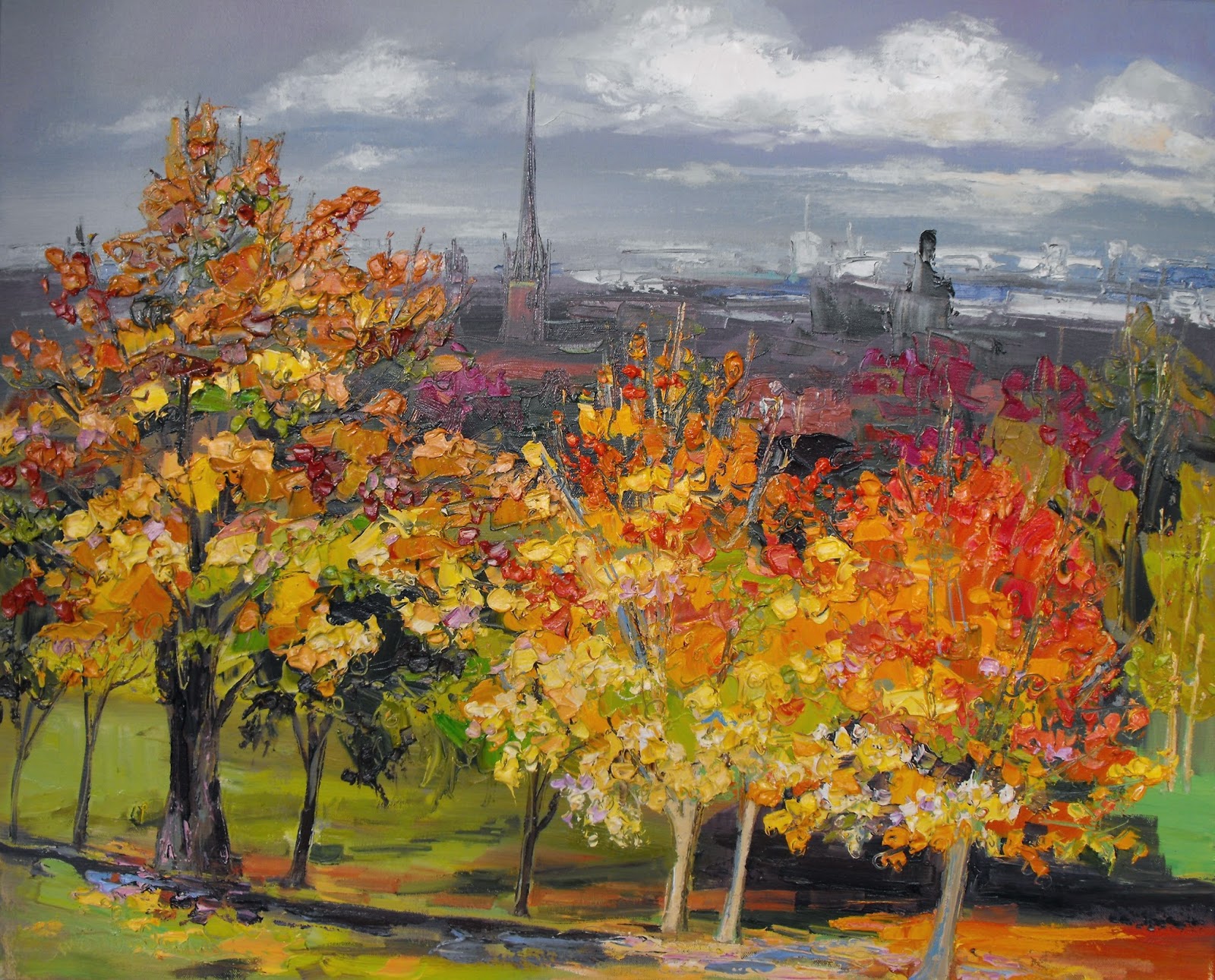 Exhibition catalogues will be arriving today, so if you'd like one - drop me a line!

I was delighted to be able to go along to the RSW opening last night, and see my Summer Clouds, Eastbourne Pier painting in all its glory in one of the main rooms at the Royal Scottish Academy.

Here it is along with (l-r at bottom) David Smith, Joe Hargan and Glen Scouller's paintings. 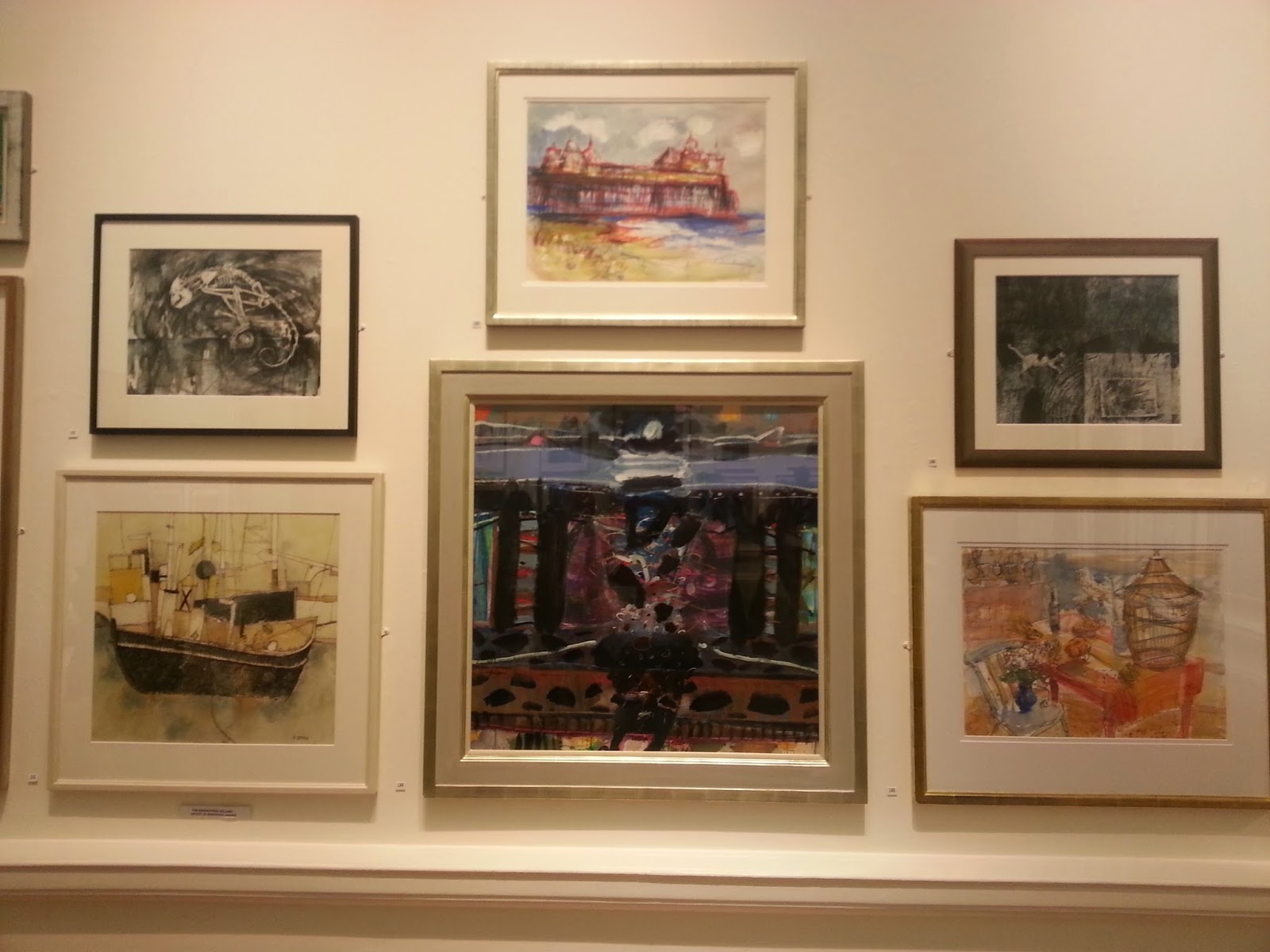 It's always odd to come into a public place and see the paintings that you've made privately in your studio.  You know exactly how they're made and put together, so they have no secrets from you...and then to see them all framed up and looking great, and on the wall in a fine, grand institution...it's very strange. 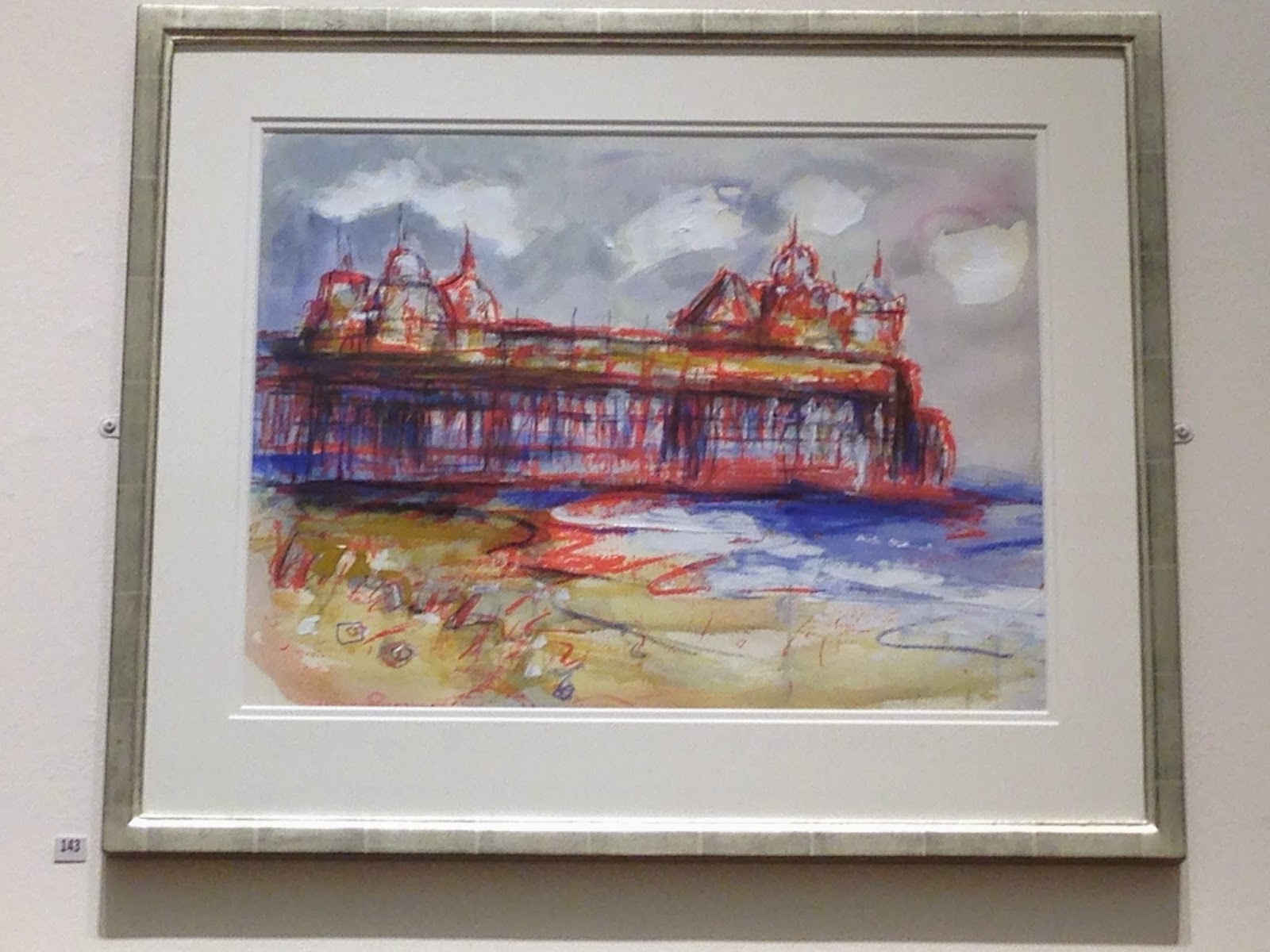 Also, I normally only see my paintings at fairly close quarters in the studio. Bizarrely, I found last night that, when you can stand so far back from your work, and it's properly lit, it looks completely different.  Colours blend, contrasts and patterns are more obvious.

When your own work is chosen to be hung in a gallery, having been endorsed by a committee, and curated with other work, it suddenly becomes transformed into something else - something you can view objectively rather than subjectively. 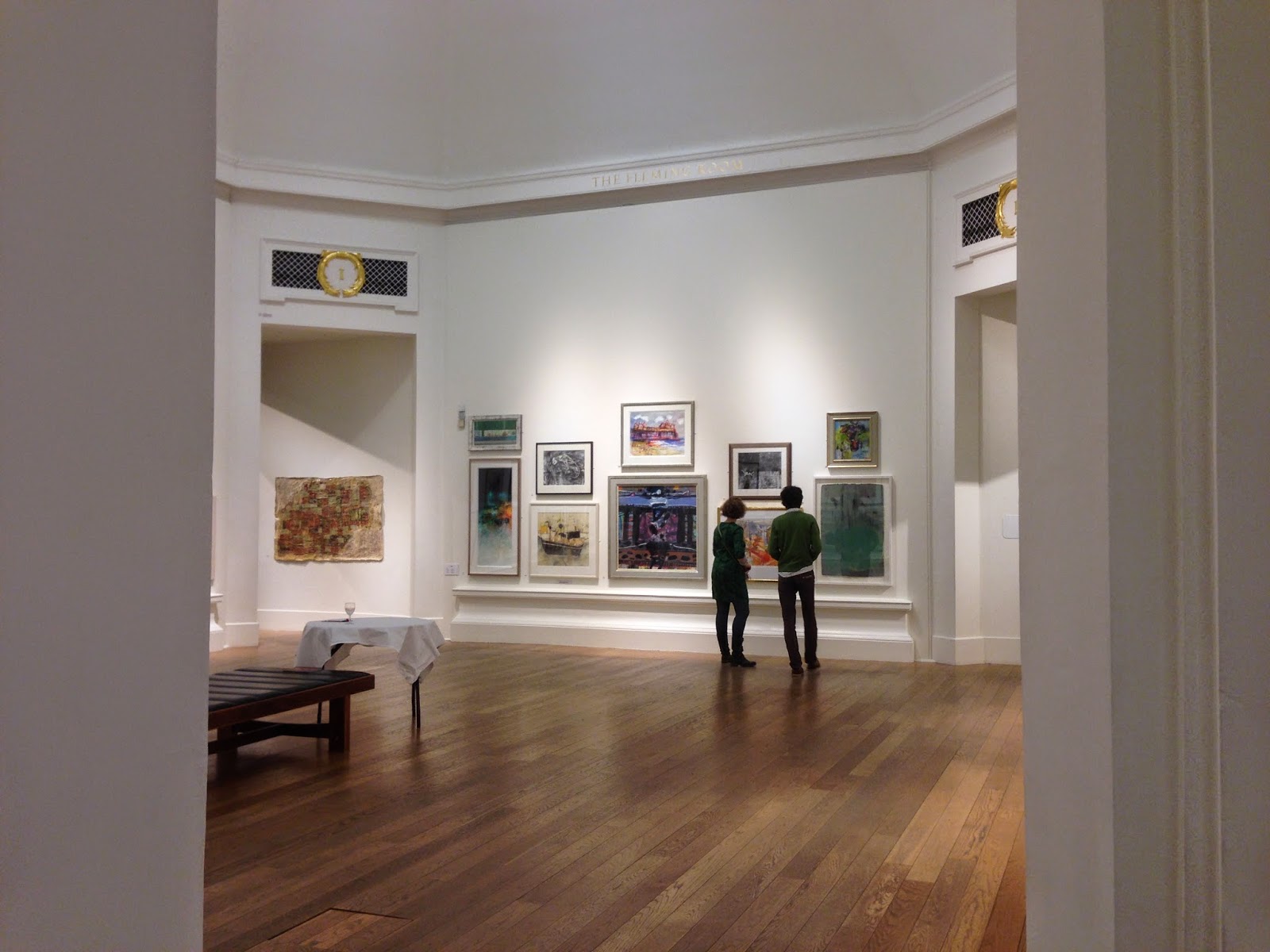 Having whoffled about my own modest contribution, can I just add that the RSW show is fantastic - lots of great paintings, well hung, beautifully lit,  in a wonderful space.

You couldn't ask for more on a dreich January day.  So if you're in Edinburgh, please do go and see it.
Posted by Judith at 05:58 2 comments:

It turns out that it isn't my small painting that I've got in to the RSW - it's my large one! 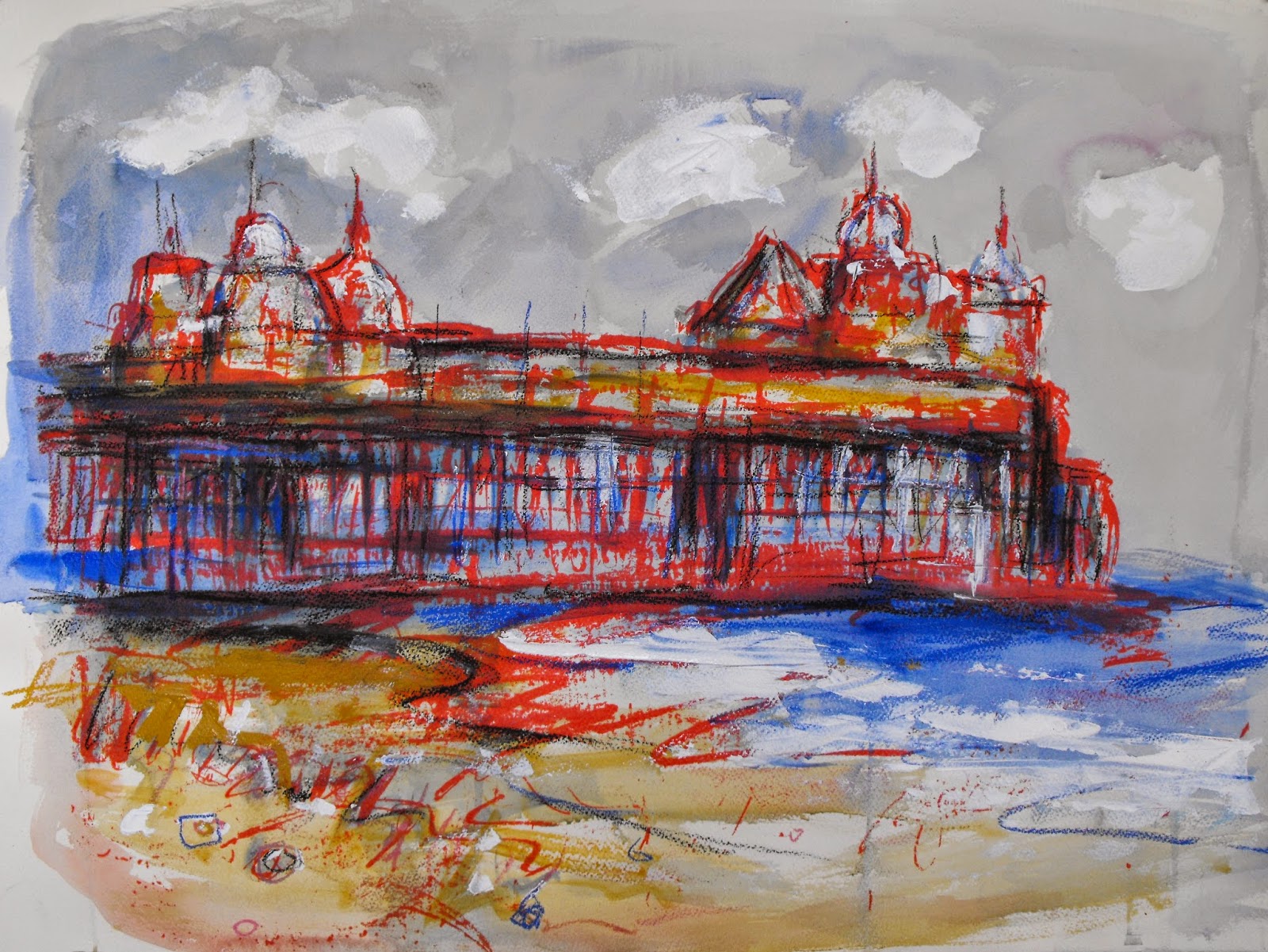 
This painting is part of a series of studies and paintings that I made of the pier, produced by means of a screenprint (the red part) with washes of watercolour and gouache over the top, along with a little pastel.

I'll be going along to the opening tomorrow night to see it!

Yesterday I asked you what this painting was and when it was painted...

Is it something early by Mondrian...? Piet Mondrian, "Farmhouse with Washing on the Line", Oil on canvas, 1897

Now these are both good guesses, as they both have similar qualities.  Both are paintings of recognisable scenes, which are then simplified into flat, pattern making arrangements of colour and line.

Both of them are landscapes which cut out the spatial reference of the sky and focus in on flat planes and blocks of colour.  Mondrian has the 'advantage' of living 100 years later than Jones, and jets off into modern art via landscape paintings like this

So what is our mystery painting? It's Green and Gold, A Shop in Calais (1896) by none other than James Abbott McNeill Whistler.

He's the American painter who produced such radical, minimalist, tonal works as this Whistler, Nocturne Blue and Silver, Battersea Reach (Oil, 1875)
and this... ...and this magnificent screen in the Hunterian Museum in Glasgow, which made such an impression on me.

The screen was a favourite item in Whistler's home until his death, and he elongates the (in reality) rather dumpy supporting plinths of the bridge into elegant swooping Japanese-print-style symbols.  It not only shares the flattened feel and pattern-making of prints, but also shares a Mondrian-like exploration of the horizontal and vertical.

I was in Washington over the summer, and found a stunning exhibition at the Freer Gallery of Art, which was dedicated to the studies and variations made on this screen, along with archive photographs of the demolition of the old wooden bridge at Battersea and building of the new.

It was fascintaing, but had one glaring ommission - they couldn't get the screen itself from Glasgow, as presumably it's too fragile to travel.  The Freer is also home to the astonishing Peacock Room (the sketches of which are in the Hunterian), which was opened just as I arrived - good timing!  The shutters are usually kept shut to preserve the colours.

Whistler's connection to Glasgow, in case you were wondering, is that his heir presented a huge amount of his work to the University of Glasgow.  Whistler's mother and his wife were of Scottish extraction, and his work was enthusiastically acquired by Scottish dealers and collectors.  In 1891, the Glasgow Boys group of painters persuaded the City of Glasgow to acquire an important portrait of Thomas Carlyle (painters must have had more clout in those days), thus becoming the first public collection in the world to own a work by him. 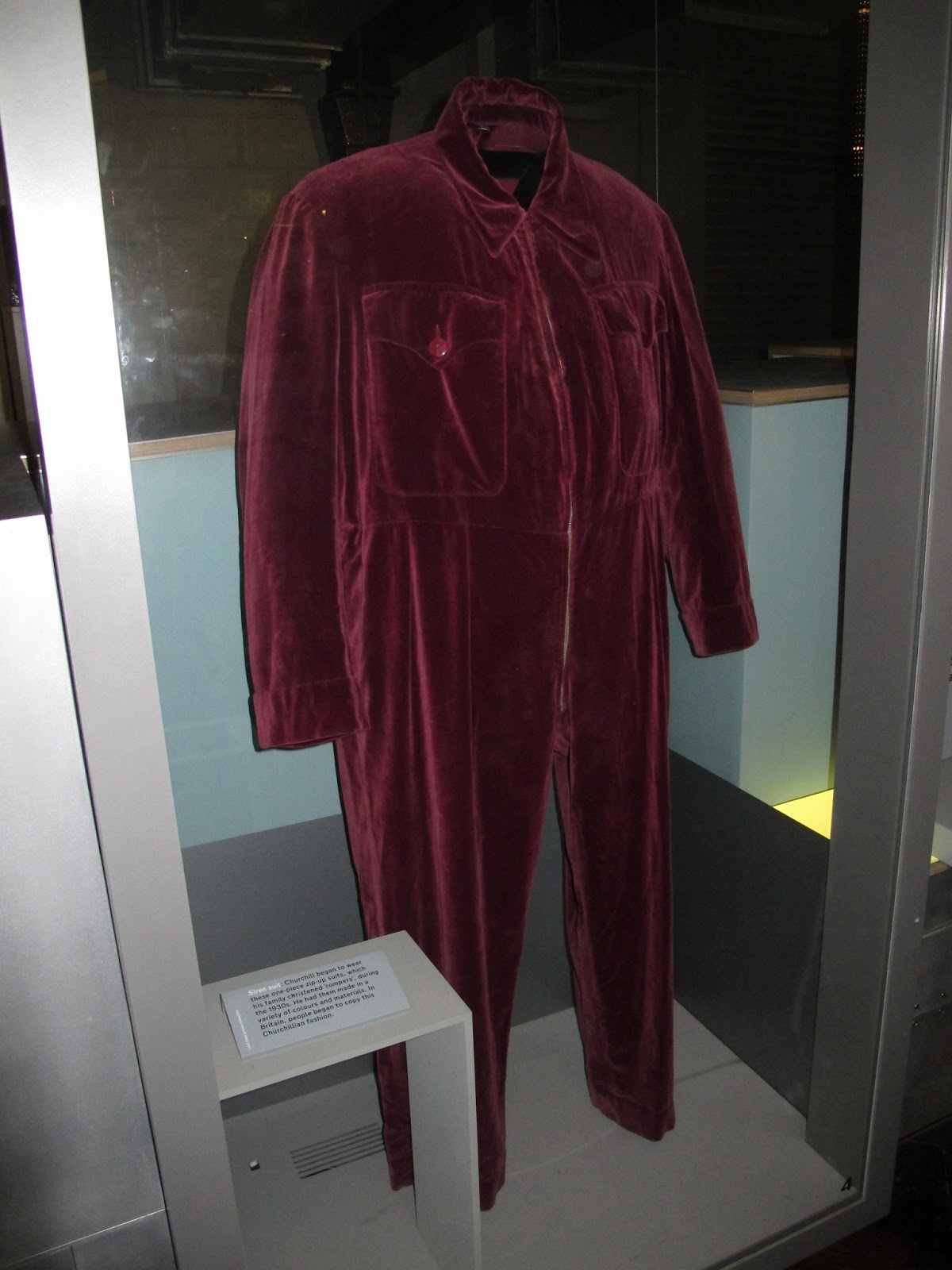 Using your extensive collective knowledge of modern art, can you name the painter and give the date of this small-scale abstract work?

But here's a clue - there's a Glasgow connection.
Posted by Judith at 03:50 2 comments:

Actress Anita Ekburg has died, aged 83.  But in Federico Fellini's 1960 masterpiece La Dolce Vita, she is forever a gravity-defying kitten-cuddling goddess, spontaneously and sensuously embracing life by iconically wading into the Trevi Fountain in the heart of Rome in a black velvet ballgown.  If only we all could. 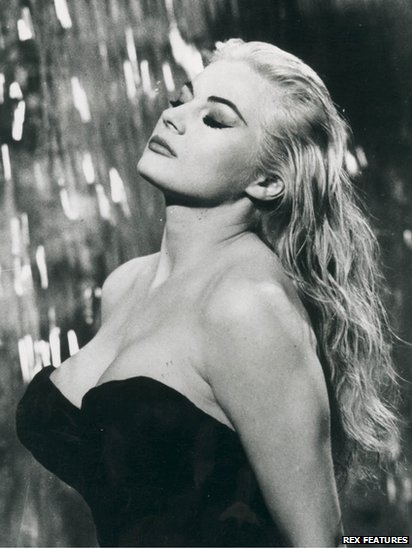 Apparently the reality was less prosaic - it was hypothermically freezing, and Marcello Mastroianni had drunk so much vodka that he was falling over.

But it's not those sort of details that endure...
Posted by Judith at 03:44 No comments:

Playing to the Gallery

Slightly less off-topic, if you're looking for an interesting read about the art world, try Grayson Perry's book  Playing to the Gallery.

Based on his recent Reith lectures (which were brilliant), this is a book which asks questions about art and the art world -

what is good and bad art?
what counts as art?
how do you become a contemporary artist?

It's witty and insightful, illustrated by some clever cartoons, and is presented in an irritating (well, to me anyway) format of unjustified text.  But don't let that put you off.  You can also get it as an audio book.

"Anybody can enjoy art, and anybody can have a life in the arts," advises Mr Perry, wisely.  So grab a copy and read/listen how!

Email ThisBlogThis!Share to TwitterShare to FacebookShare to Pinterest
Labels: Grayson Perry Playing to the Gallery, Grayson Perry Reith lectures, what counts as art, what is good and bad art

A bit off topic, but an interesting (and bleak) article HERE by John S Warren (as recommended in the National) about the current economic situation of the UK.

With the most important General Election in a generation coming up, I thought I'd better start getting my head around the nitty-gritty.  I was actually vox-popped yesterday for an opinion poll on the election, and whilst certain things were crystal clear, one of the questions I was asked was which party or coallition would I like to see in power at Westminster?  There there followed an alarming range of possibilities. Which kind of flummoxed me.

Anyway, the most interesting part in the article is the debate in the comments section that follows.

Informed debate and discussion from a wide range of viewpoints is a good thing, if only to test your own theories and assumptions.  One of the real positive outcomes of the Referendum is this desire for honest, informed, everyday political debate.  Which is quite an amazing thing, if you think about it.
Posted by Judith at 04:29 No comments:

Just a heads-up to let you all know that I will have new paintings at the LONDON ART FAIR, which runs from the 21st-25th January at the Business and Design Centre in Islington. 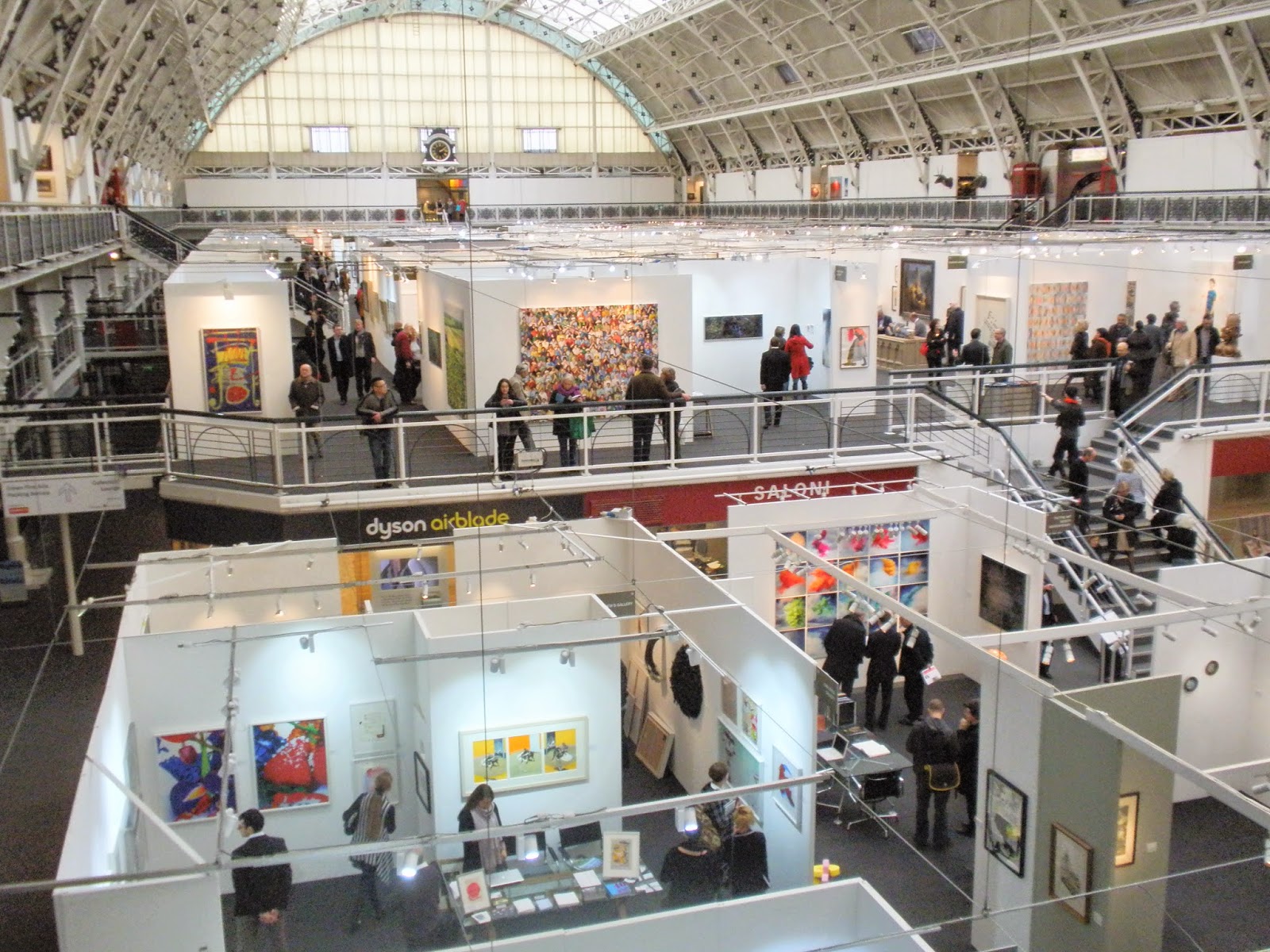 As I always say, as it's the first art fair of the year, it's a real barometer as to how things are going in the art world.  Fingers crossed that the signs are good this year!

I will have my paintings on Stand 52, Duncan R Miller Fine Arts.  It's quite a complicated exhibition space, but it's down at the far end of the left-hand corridor of the upstairs central mezzanine area.

It's a wee taster for my solo show "Journeys Through Landscape" coming up shortly in London in February.  You'll see paintings like these ones of Norfolk and Somerset... 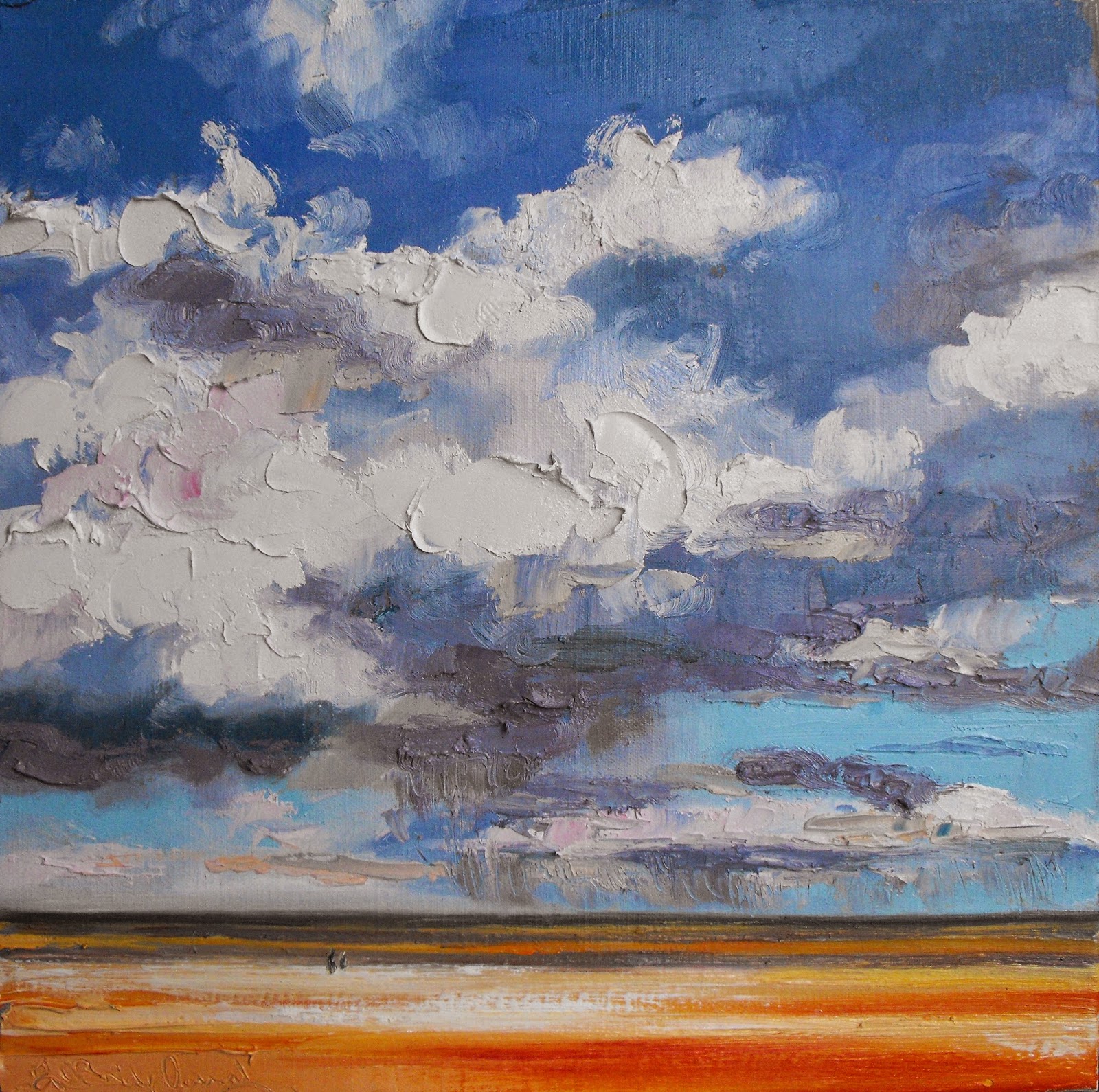 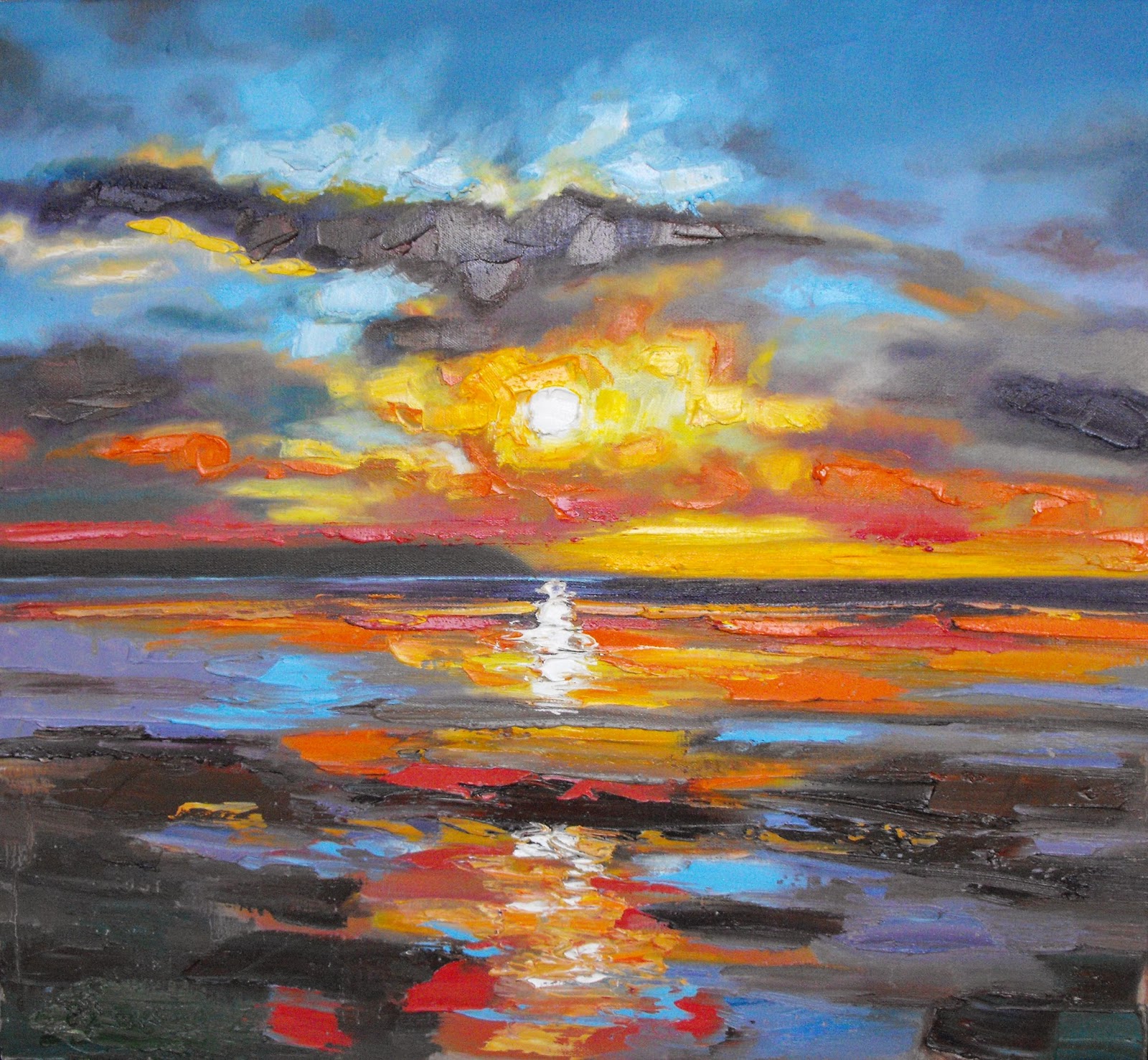 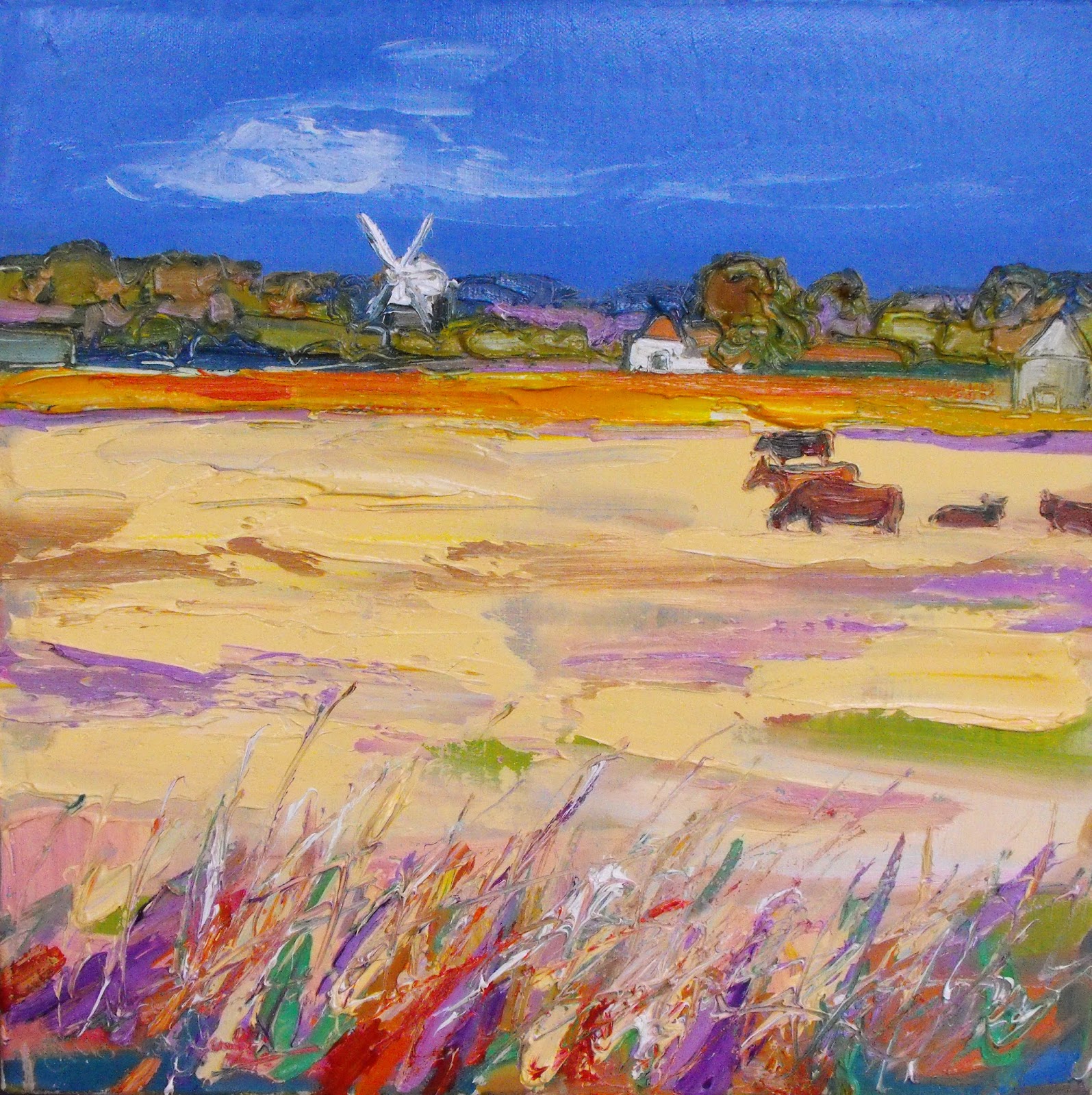 There's always a great mix of cutting edge new artists at the London Art Fair (usually top be found off the balcony area upstairs) and iconic 20th-century names - so it's well worth the visit.  The Business and Design Centre is a great exhibition space to explore if you've never been before.

Rest and Be Thankful - the Painting

Thought you might like to see the painting that resulted from my Rest and Be Thankful trip. 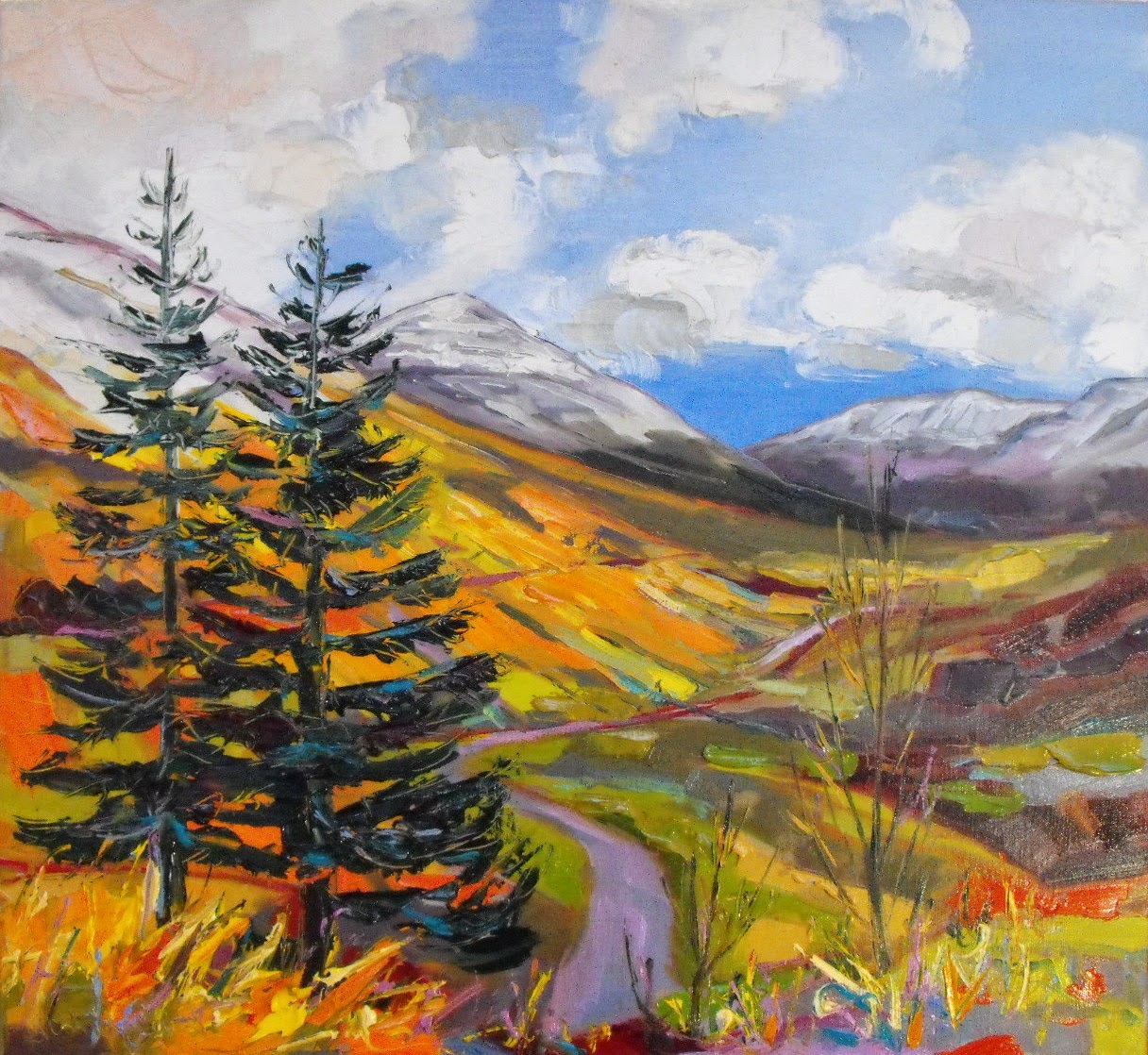 What do you think?

It's off to the Walker Galleries in Harrogate next month for their Scottish Show (7th-15th March).

Accompanying it will be paintings of the Peak District and Derwent Water in the Lake District.
Posted by Judith at 13:02 No comments:

I heard yesterday that I have a painting in the annual Royal Scottish Society of Painters in Watercolour exhibition at the Royal Scottish Academy in Edinburgh.  Very prestigious!

The slight hitch is, that having submitted the maximum 3 works to the jury by courier, I don't actually know which one has been selected (for complicated reasons involving submission numbers).

I think it may be the smaller of the pieces - which would mean it was this little watercolour, of Monserrat near Barcelona. 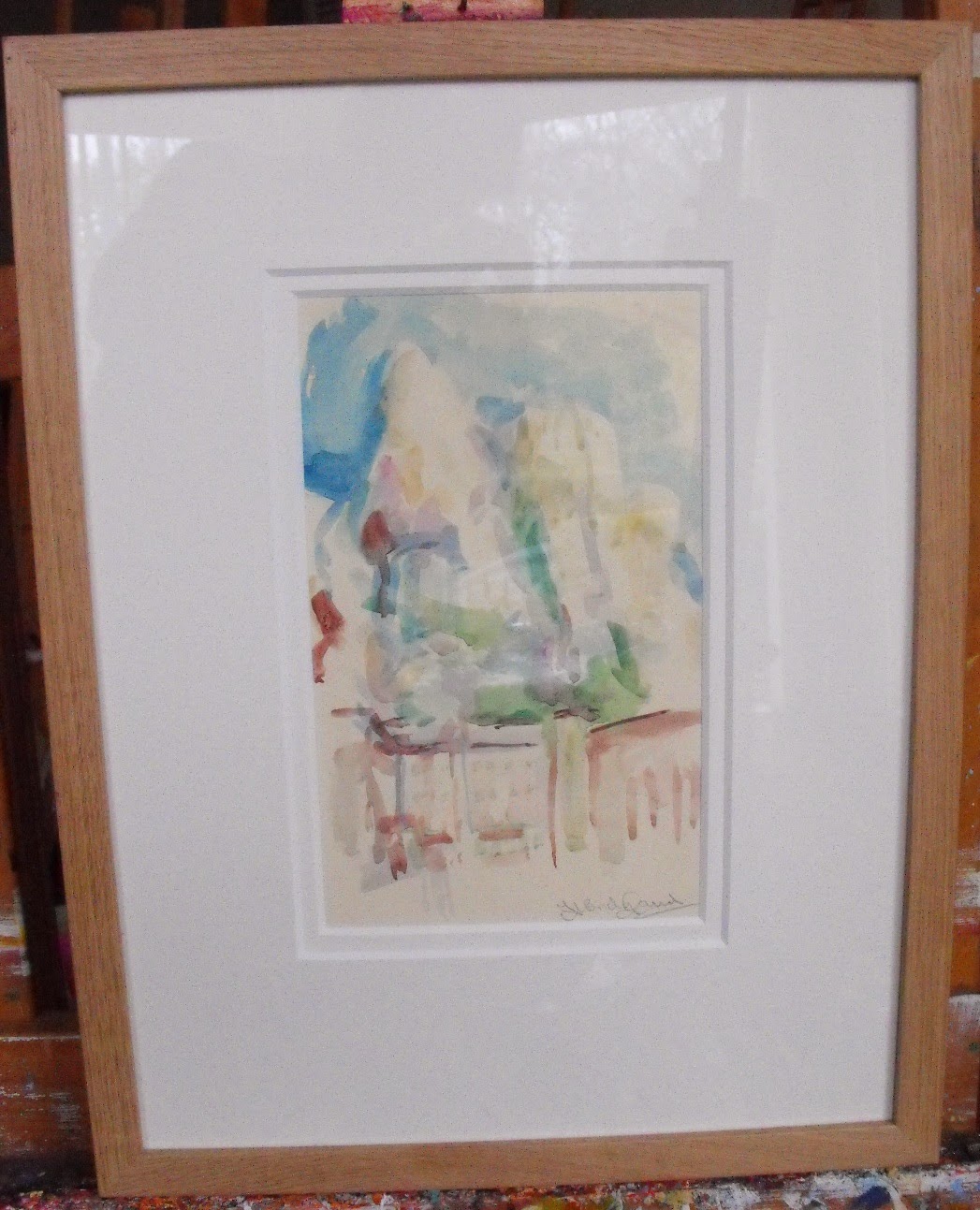 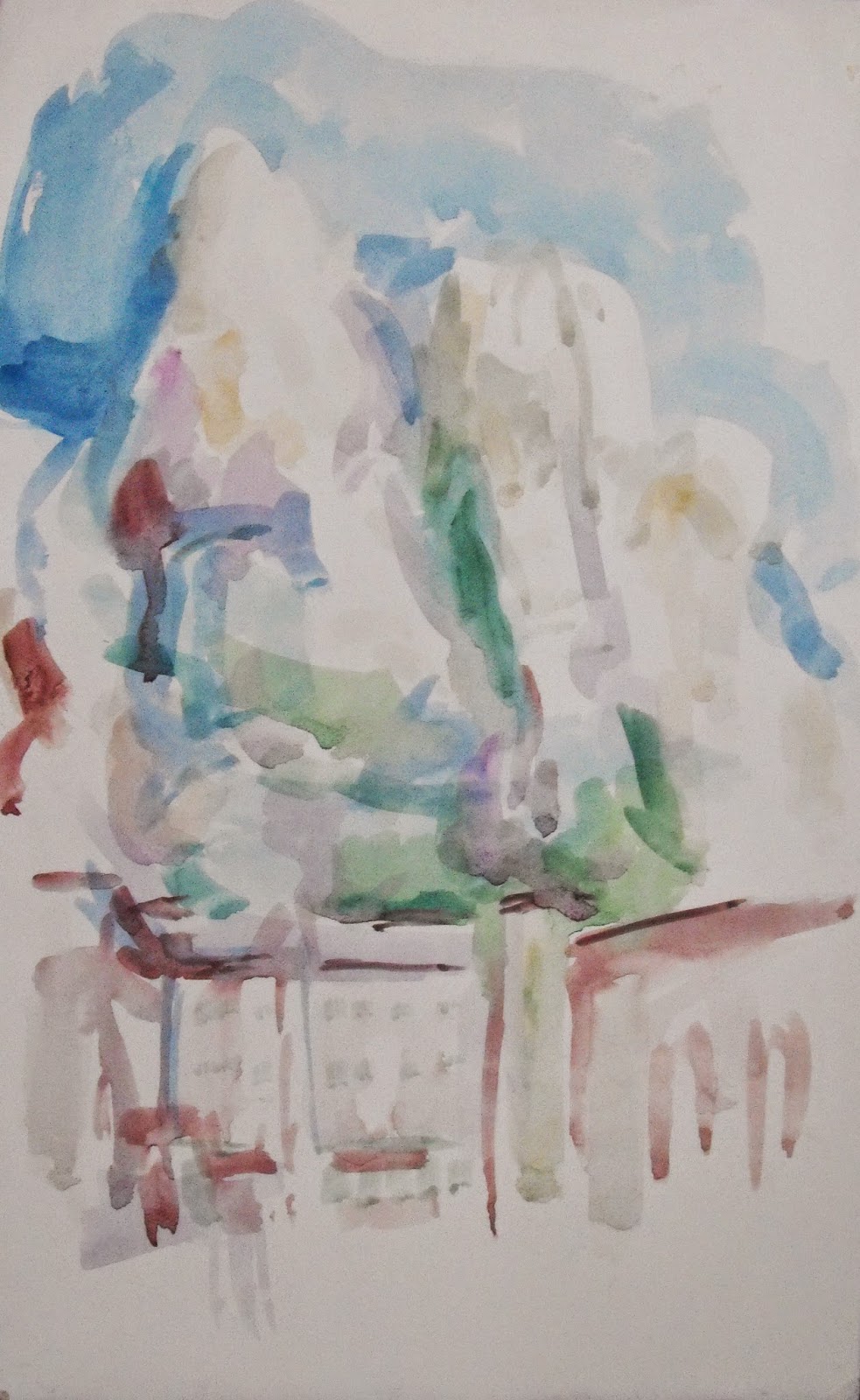 Montserrat is a strange towering formation of rock, meaning 'jagged mountain' in Catalan.  I was very taken with it, and did a huge oil painting, plus a whole series of little oils and watercolours.

Rest and Be Thankful

I've been out and about over the Christmas break, taking photographs.

Here are a few from the Rest and Be Thankful, on the way to a favourite spot of mine for painting, Hell's Glen.  It's on the way from Arrochar to Inverary.  Originally an old cattle droving road, it was later a military road built around the time of the '45.  Nowadays, the winding old military road makes a good classic car hill climb (I speak from experience).

The weather was pouring with rain one minute, then sleet, and then sudden bright sunshine and blue skies with fast-moving white cloud - perfect! 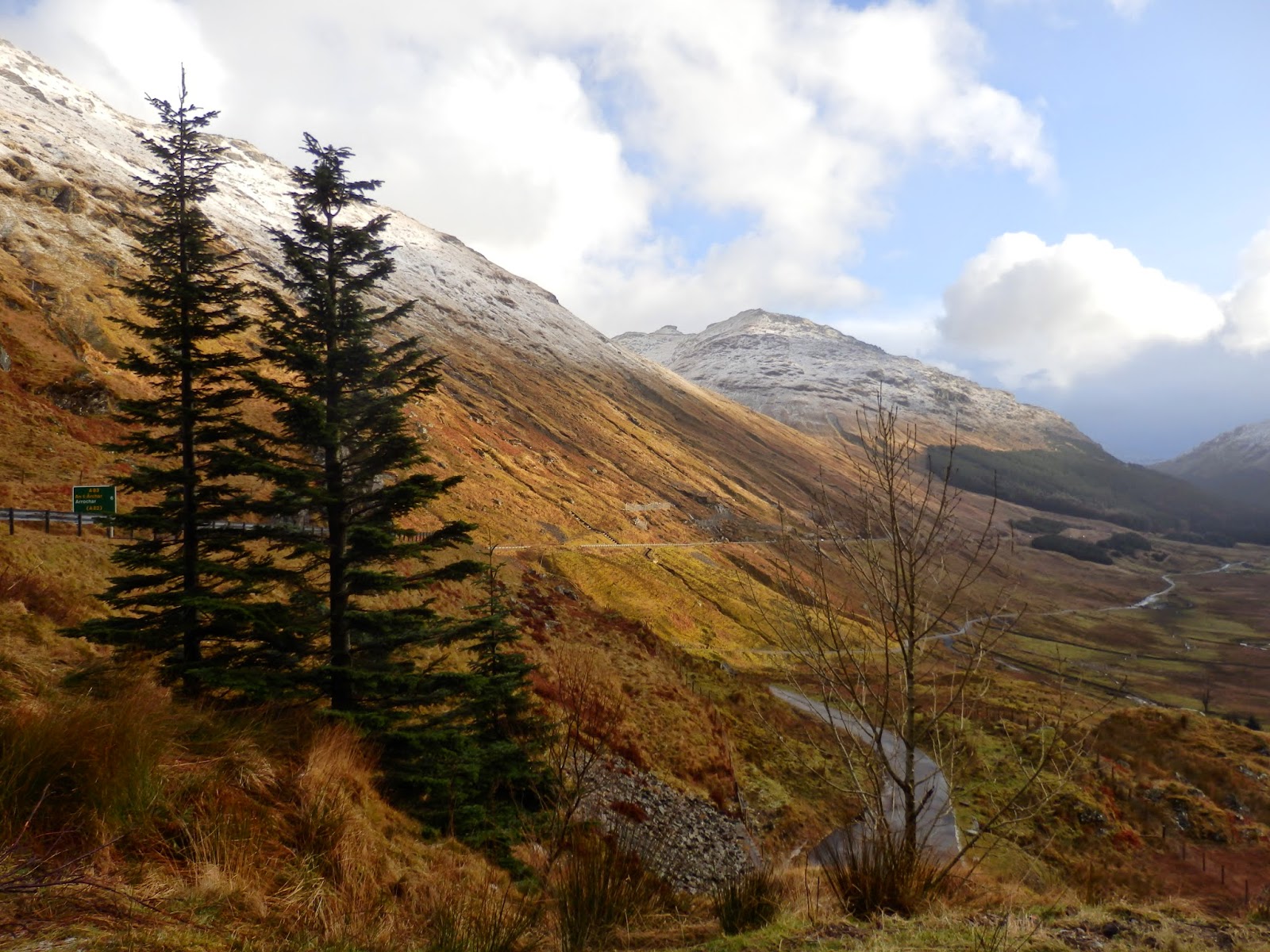 I had a helper. 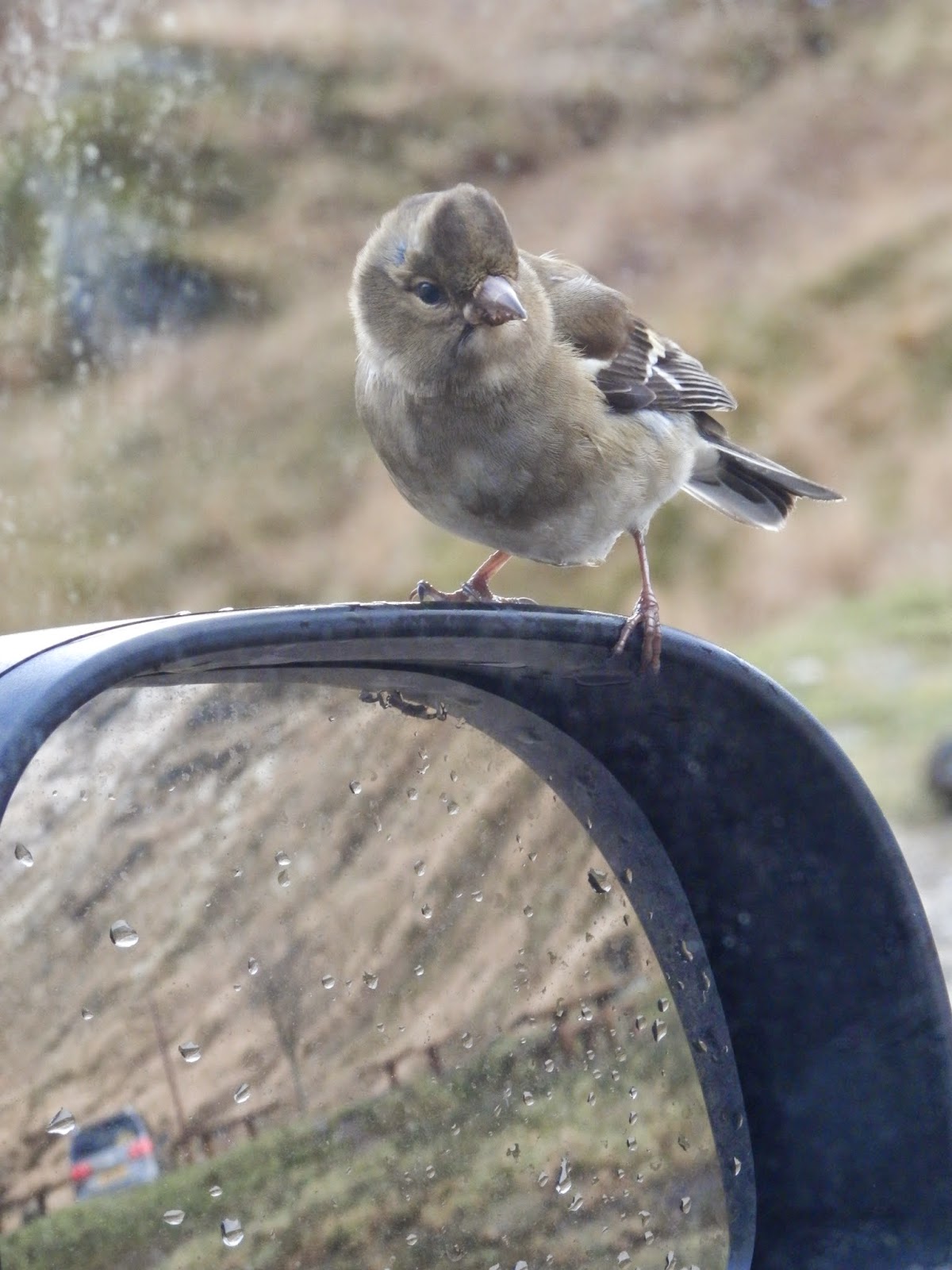 It's a darling little lady chaffinch, who must have been very hungry, as she flew down to the car window without fear.  All I had to give her were a few crumbs.  Fortunately,  my car is always full of crumbs.

She was very grateful. 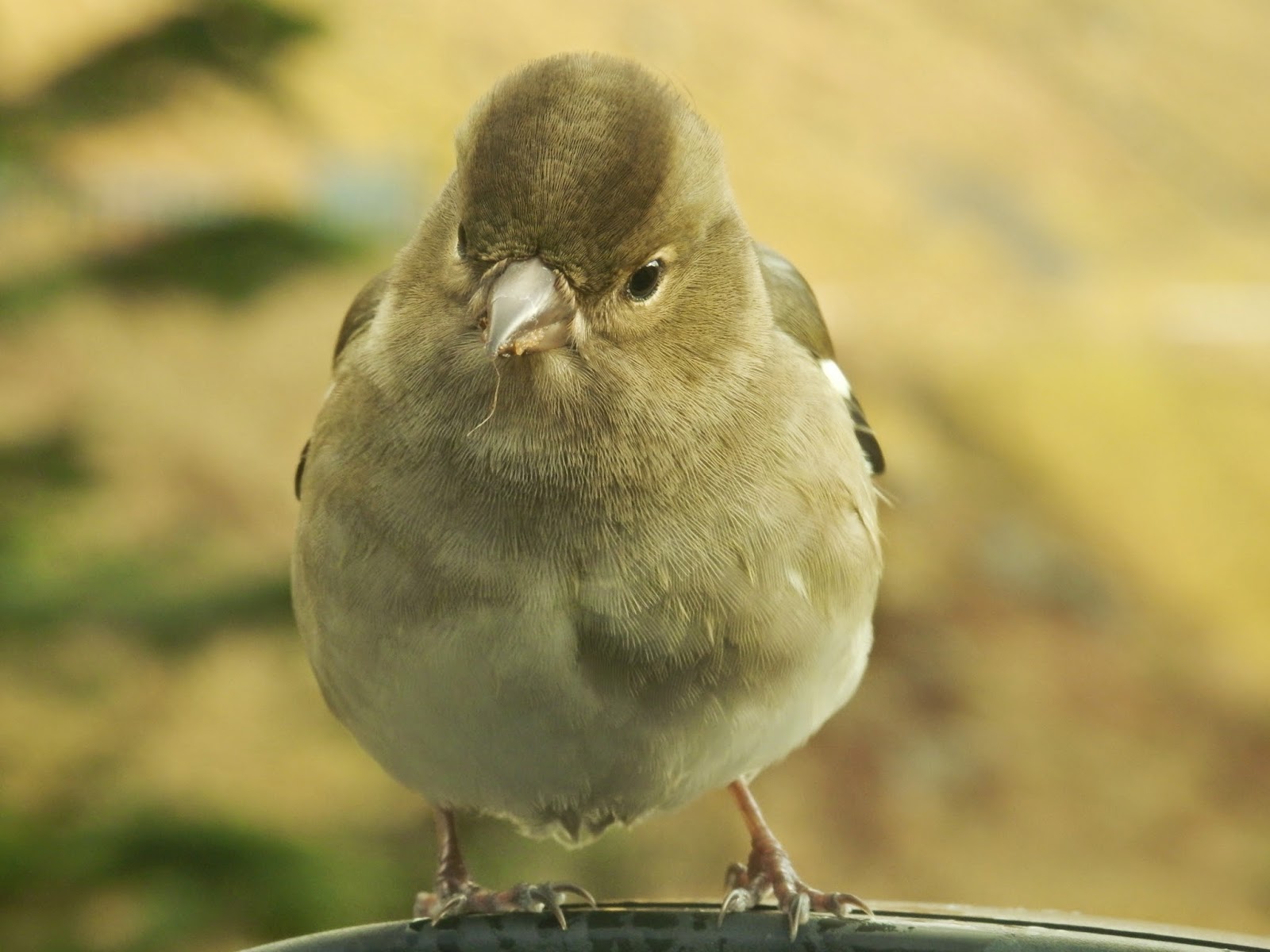