Whilst in London over the weekend I managed to get to see the new super-duper block-busting Bond film Skyfall.

One of the highlights is the new Q (played by Ben Whishaw), who turns out to be a geeky young whippersnapper with a neat line in witty one-liners.

Here he is in his first meeting with Bond.


The plot is all about establishing 50th anniversary Bond as a very British Jubilympic icon, so here they are appropriately against a backdrop of quintessentially British paintings in Room 34 of the National Gallery in London (NOT the National Portrait Gallery, film fans - that's round the corner).

And in case you're interested, or want to amaze your friends with your art historical knowledge in a Bond-themed pub quiz, the painting on the left is Joseph Wright of Derby's 1768 Experiment on a Bird in the Air Pump (all about cutting-edge innovations in science - an appropriate as a backdrop for Q)

....and the one on the right behind Bond is Thomas Gainsborough's The Morning Walk of 1785, showing a little lap-dog looking adoringly at its mother-figure mistress (Bond and M?).

The painting that Bond and Q are contemplating as a metaphor for Bond himself is Turner's The "Fighting Temeraire" Tugged to Her Last Berth to be Broken Up of 1839. Whilst there are clear parallels between the imagery of the redundant old warship heading for an ignominious end, here's a further twist.

To read more about the scene in Room 34 in the National Gallery, go to my other blog here.

To read more about the other paintings in Skyfall and how they inform the plot, go here for the painting in Mallory's office and here for the stolen Modigliani in Shanghai.

But the thing I really liked about new Q, apart from his penchant for choosing top art locations for his spy assignations,  is his Scrabble letter Earl Grey tea mug.

You mostly only see it from the back (especially in one particular close-up where he takes a drink out of it), and it looks like this... 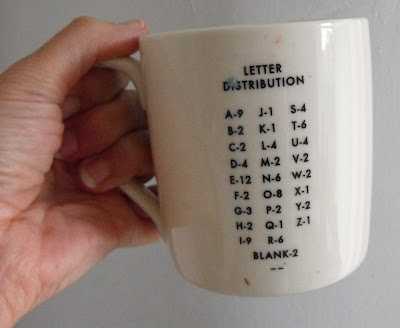 Yup, I recognised it because it's like my studio mug (which is why mine has paint on it), only mine says 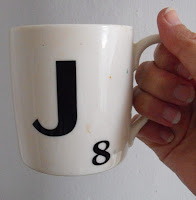 Well, it made me laugh!


(Now, if you're wanting to read anything into Q's mug - and Skyfall seems to be a film where there are multiple layers of meaning hiding away where you least expect it - then I would draw your attention to the fact that there is only one 'Q' in the letter distribution of Scrabble (Q being the equal-highest scoring letter), but two 'M's'.  As there turns out to be in Skyfall by the end....)
Posted by Judith at 12:57