I find chalk figures really intriguing, and I came across this figure in the hillside near Weymouth, and took photos of it from a couple of places.  Chalk figures are giant drawings in the surface of the landscape, often made hundreds of years ago, which cut away the turf to reveal the white chalky soil underneath.

Apparently this one is of King George III, and is officially called the Osmington White Horse.  It reminded of the figures in the chalk in Sussex, such as the Long Man of Wilmington, the mysterious guardian of the South Downs. 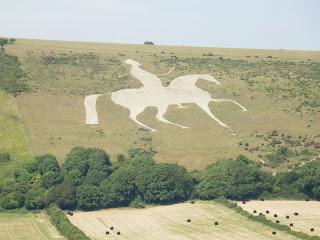 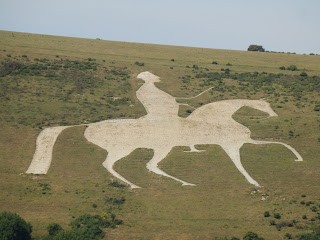 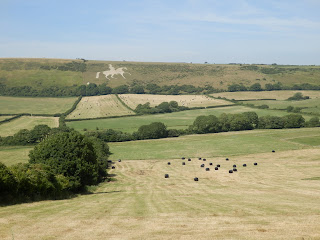 Co-incidentaly, whilst in the Towner Art Gallery in Eastbourne later in the trip, I was delighted to come across this print  by local boy Eric Ravilious, painter par excellence of the Downs.


You can see he's exaggerated the shape of the hill-ridge, and the line of the hedge, which gives a more sensual sweep and rhythm to the landscape.  It's still pretty exciting to see the same lines of the fields as Ravilious was drawing, over seventy years later. 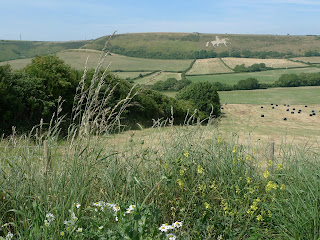 This is the Long Man of Wilmington, which you can see from the train near Polegate.  When you see it out of the train window on the right hand side, you know you're almost back in Eastbourne.

Ravilious also painted this scene in 1939, on his whistle-stop tour of chalk figures, before he went off to be official war artist (sadly he was killed in 1942). 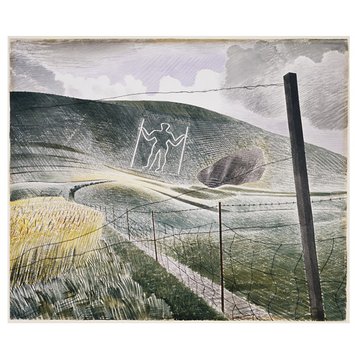