Art and War - Dazzle Ships and Camouflage in World War One

There's a really interesting article HERE about the dazzle ships of World War One.

These were bright cubist-style patterns painted onto the sides of ships as a form of camouflage to confuse the enemy.  Now they look like enormously audacious and startling pieces of conceptual art. 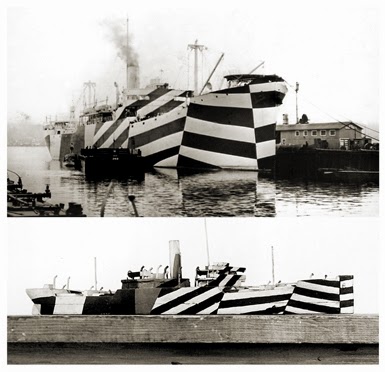 There's going to be one berthed at Liverpool Docks.

Liverpool Biennial, the UK Biennial of contemporary art, and Tate Liverpool will jointly commission Carlos Cruz-Diez to work with the idea of ‘dazzle’ camouflage, using a historic ship. The “Edmund Gardner” is situated in a dry dock adjacent to Liverpool’s Albert Dock, and will be a new public monument for the city.

These dazzle ships even became the actual subject of other artworks, such as this by Scottish Colourist J D Fergusson. 
Camouflage was, of course, used in a variety of different ways in the First World War, not just on ships.

This amazing example is one that's actually part of my family history.  I was very excited to come across it in the main hall of the Imperial War Museum in London (I don't know if it's still there - I haven't managed to go recently as it's been closed for refurbishment).

This is the actual gun fired by my Great-Uncle Frederick.  It's a 9.2" Howitzer Mark 1, called 'Mother'.  How's that for a Freudian field-day. A huge curiosity in its day, this heavy seige howitzer was sent to France in 1914, where it was operated by 8th Siege Battery of the Royal Garrison Artillery from October 1914.  My Great-Uncle arrived in France on 16th February 1915,  at the time the gun was transferred to 10th Siege Battery RGA (which he was in).

It saw use during the battles of Neuve Chapelle in March 1915 and Festubert in May 1915, where my Great-Uncle was killed, aged 18.

© IWM (ORD 108)
It's just the most extraordinary thing.  It plays on any number of levels, and is both repellent and attractive - this terrible bringer of death and destruction, called 'Mother', of all things, but now this passive, beautiful sculptural object, and one which was actually part of the life and death of my relative.

It reminded me of Jacob Epstein's disturbingly fierce and strange Rock Drill sculpture of 1913 (it's huge, towers over you),  with its futuristic storm-trooper astride an actual piece of mechanical drilling equipment.

Art, war and death, and a strange uneasy beauty amidst the mechanics of killing.  It's like a Rosenberg poem come to life.