Bill Viola is an American video artist pioneer whose major retrospective opened at the wonderful  Yorkshire Sculpture Park this weekend, and I went to see it.  Viola specialises in enigmatic, slow motion videos of figures, which create intense emotional feelings.

Now bear with me here - last month I blogged about Steven Wilson playing at the Royal Albert Hall.  Wilson's music is very dark, intense and emotional, and is accompanied by striking visuals of projected films and animations.  Wilson seeks out the uber dramatic, the darkly quirky, and the often downright depressing as his subject material.

On the second night, the second half of the show started with a black and white film of a beach viewed through the windows of a house.  There, near the waves, is a small black shape.

The film is in very slow motion, so it is only after a while that you realise that the black shape is moving towards you - a sinister hooded figure.  It comes closer and closer.  You can't take it your eyes off it.  For something moving so slowly, it is very compelling. 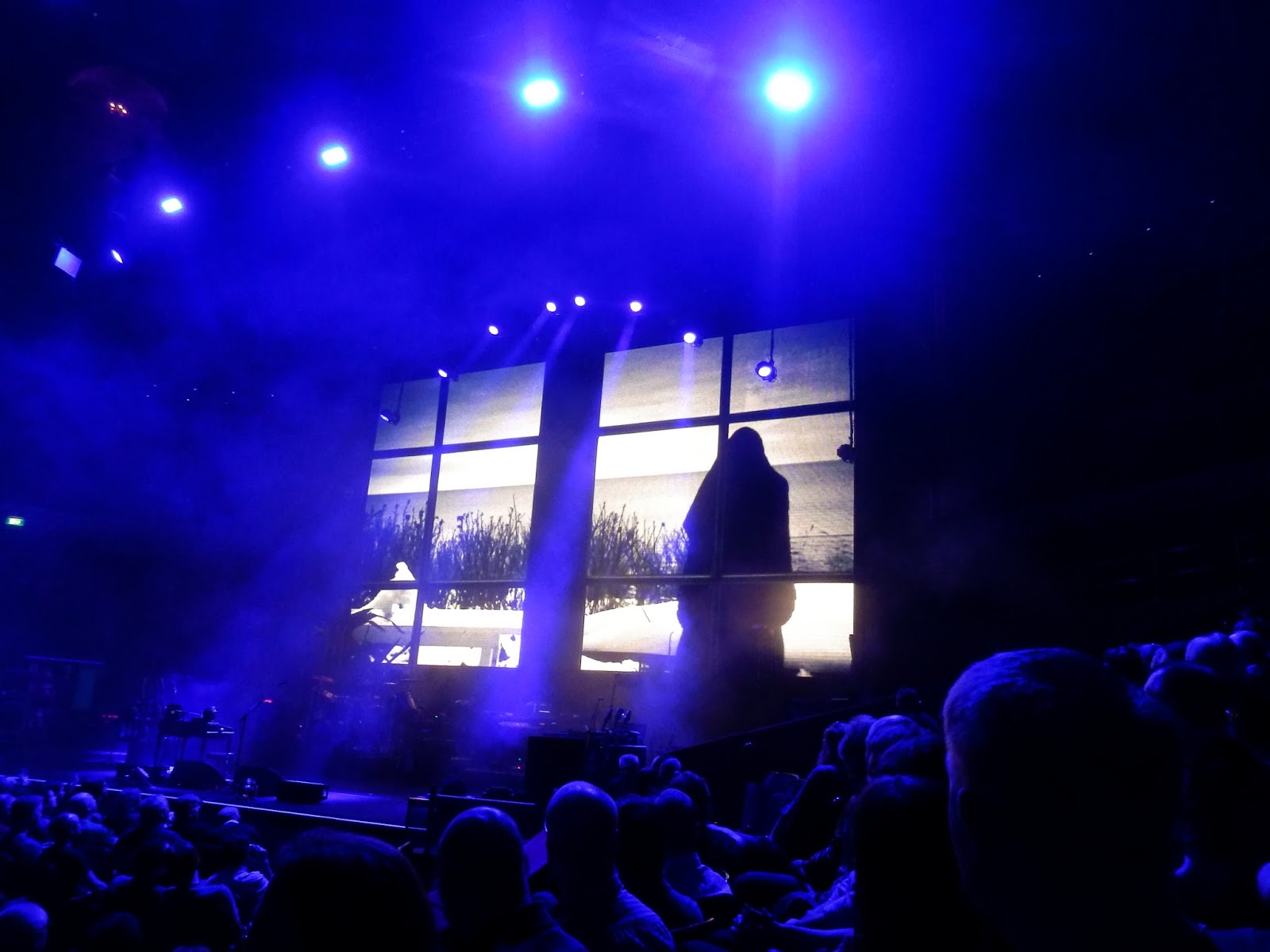 Then the figure disappears out of the picture to the right hand side.  For a long while, there is nothing but the view of the beach and the waves.  However, the absence of the figure creates a tension.  What is going to happen next?

Then horribly, the figure enters from the right, to stand in front of you.  It's actually a real fright - a slow motion fright, but a fright nevertheless.  Which is ridiculous - but because you are so fixed and intent on looking at the image in the dark in such detail, it packs a powerful emotional punch.

At the time, the film superficially reminded me of the work of Bill Viola.  Both use the technique of slow motion videos to convey that emotional punch.  But, in a very important way, it is also very unlike his work.

Viola's work is all about emotion, yes, but it is about elemental opposites - life and death, water and fire, youth and age, male and female.  This is a guy who doesn't beat about the bush with the small stuff, it's all about The Big Questions for him.  He pares away the superfluous detail so that it is just People, Fire, Water, Light, Dark, Life, Death.  His work has a big, intangible sense of spirituality, a sense that there's something very profound but you don't know quite what it is, often involving the exploration of the thin, thin divide between life and death. It manages to be incredibly broad but very subtle at the same time.

When you compare the two, it is this depth is lacking in the Steven Wilson film, for the purpose of the latter is merely to illustrate the mood of the music, to set the scene, to provide a memorable image, a long Gothic 'BOO!'.

Some years ago I saw a film by Viola ('Observance') whilst in Liverpool.  A procession of people in slow motion came towards the camera and then moved away again. How simple.  But it was full of what seemed to me to be a profound longing and sadness.  It made me cry.

Remembering how it had affected me, I was keen to see a new exhibition of his work at the Yorkshire Sculpture Park at the weekend.

The exhibition consists of a series of large, dark spaces, each one showing a different  video installation.  As your eyes adjust to the light, the first piece you come across is The Innocents.  On one wall, two screens show grainy black and white images of a boy and girl walking towards you in very slow motion.  They come to a wall of water which flows between you and them.  They pass through the water, and as they do so, they come into high definition transformative technicolour in front of you, before returning back through the water, walking away and fading into the grainy dark.

On the other wall, a single screen shows the same ritual being performed by an older woman.  She comes through the water, emerging in a bright red dress, but the water for her is a shock, almost a trauma

In the next room, 'The Trial', there are two giant screens side by side, one with a young man and the other a woman, both naked from the waist up.  They stand as they endure torrents of different liquids are poured onto them, again in slow motion.  First thick, dark and oily, so that it is hard for them to breathe, then red like blood, then milky white, then clear water until they are clean again. Apparently neither actor was told what to expect, so their reactions are genuine.

As you can tell, not much happens, and yet everything happens, such is the strangely compelling nature of the piece.

One room which had parents hurrying their children through had two large screens propped up against the wall, one with the life-size figure of a man and one with a woman, both of whom were naked and who were slowly examining their bodies with a torch.

Whilst the woman examined her body with a certain amount of pleasurable surprise and contentment - as if she had a quiet delight in the fact that her body was still all working and standing her in good stead after all these years - the man looked rather more awkward, as if he was searching for something - perhaps if it really was Mr Corbyn, he was trying to track down some lost policies in his folds of skin.

In other words, even though they were performing the same action, the woman looked as if she had found something, the man as if he had lost something.  What was that something?  In a broader sense, a feeling of hope, of time, of life passing perhaps?  Time had had its effects on their bodies, and this elicited acceptance in one and sadness in the other.

This next image is from the room with the installation called 'The Dreamers' - a series of screens each showing a person floating underwater.  Occasionally a bubble came out of their nostrils.  I found it downright creepy, and couldn't stay.

Apparently Bill Viola had a hugely formative experience when he was six, when he fell into a lake in north New York and nearly drowned, only being saved when he was pulled out by his uncle.

Whilst he was under the water, he saw that there was a whole different beautiful world beneath the surface, which he had never even known existed before, one that was calm and serene.  This very elemental near-death experience of air/water, the narrowness between death and life, passing through to another world, profoundly informs his work. The near-drowning becomes a trial, a baptism, an epiphany, a cleansing.

A short walk away in the grounds of the park is the Chapel, with Ai Wei Wei's Iron Tree outside (I recently saw his remarkable new exhibition which just opened at the Royal academy).  In the Chapel are another two works on display, Fire Woman and Tristan's Ascension.

When you go into the space of the building it is again pitch dark, and there is a great noise, the roaring of flames.  A huge screen, the double height of the chapel, shows a wall of flame with a hooded figure in front.  You watch as the flames ripple in slow motion.  What is going to happen?  Will she be engulfed?  Walk into the flames?  Be consumed?

Then eventually, she raises her arms, and falls.  She falls into water, and disappears.  The flames turn out to be a reflection, and they ripple and change colour, forming patterns until they eventually resolve and calm.

In the companion piece, a man is lying on a slab, with water pouring onto him.  Except the water is running upwards, pulling away from him.  You watch and watch.  You watch for a very long time.  The water roars continually.

Then suddenly, he twitches and moves, and as if pulled by an invisible force, he flies upwards, in a movement which is strangely euphoric, completely surprising, and literally uplifting.  He disappears. The water eventually stops until all you can see is a fine mist. Because you are so focussed in the dark rooms on the huge videos, the action or inaction takes on a huge significance.  You are forced to notice every detail, immersed in waiting for what is going to happen next.

And because of the nature of the human brain, which looks for narrative order in chaos, you are constantly looking for the story of the image.  Why are they there?  Who are they?  What is happening?  What is going to happen next?  What are they thinking?  How would I feel lying underwater, or walking through fire?  Would I look as serene, could I bear the weight of the water, the heat of the fire, could I stay calm?

Go and see it if you can.  And while you're there, go and see the Poppies as well. 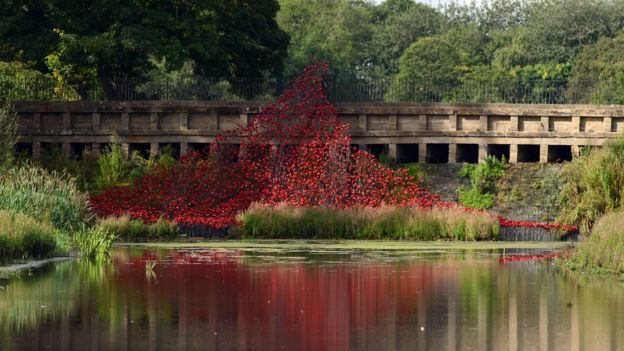