I've been pretty busy in August, and as well as Northern Ireland and a weekend in the Peak District, I've also been down to Cornwall, to take photos for a show that will take place next spring in Bristol at the Lime Tree Gallery.

It's always wonderful to go to Cornwall, but the weather varied from frustratingly foggy... 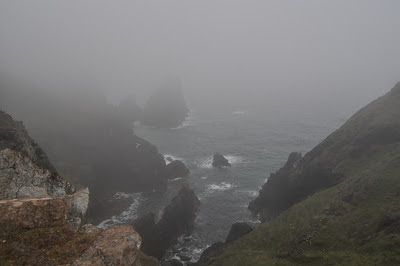 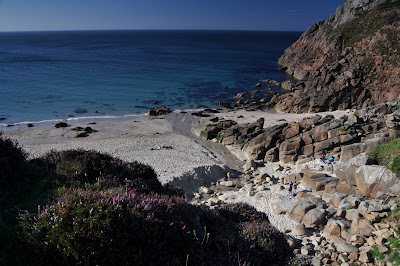 I also tramped around the countryside with my Ordinance Survey map.  Here's Lanyon Quoit... It's a good 15 minutes of walking from the road, and I was expecting something huge - instead, it's the size of a large polo mint (well, the hole is about about 18" across).  When my 12 year old son saw the photo, he laughed for ages - "It says LOL!!" he said.  Ah, the texting generation.  Unfortunately, that's exactly what it looks like....

I also visited places that were favourites of Peter Lanyon and Barbara Hepworth.  This is Trevalgan Hill near St Ives... 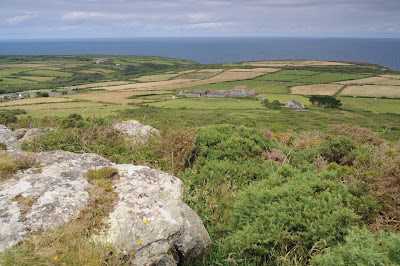 It's a place where you have a sweeping panoramic view of the sea almost 360 degrees round, and out across the pattern of the fields.  It is topped with the rounded rock formations that you find scattered over this part of the county.

Here's Hepworth's sculptural response to the scene, with its curving wings expressing the view across the landscape, and the sense of being enfolded in the landscape, in a feminine, nurturing form.

She wrote  ‘the cliffs divide as they touch the sea facing west. At this point, facing the setting sun across the Atlantic, where sky and sea blend with hills and rocks, the forms seem to enfold the watcher and lift him towards the sky.’


In Lanyon's paintings, it is as if we are seeing both a conventional landscape and a cross-section of the earth at the same time, so you can read the space in different ways.

Also, Lanyon depicts not just the landscape, but its sense of history, and its economic and social past.  Cornwall is of course littered not only with neolithic monuments, but industrial ones, in the form of the chimneys of the tin mines punctuating the landscape.

This perhaps most famously comes together in his painting St Just (a village on the coast which was the scene of a tragic tin mine disaster).

Lanyon's technique, which was common to the St Ives painters at the time, was to paint on a white textured ground, which then had thin glazes of colour painted on top.  These were scraped and rubbed down, revealing the texture and colours below, creating veils of paint, revealing and hiding, creating an almost sculptural surface.

The subject of the painting is a real landscape, but one with an aerial view (gliding was one of Lanyon's hobbies, despite having vertigo).  You can see the fields and the coastline.  But it's also about the mineshaft which runs down the centre of the painting, thrusting out into the sea. which collapsed killing the tin miners.  The colours are raw and earthy, the paint surface energetic and reworked.  It's about landscape and labour, natural and man-made, land meeting sea, male and female, it's about the edge of the things, about being totally submersed in the something very elemental.  It's also about sacrifice, as it can be taken to look like a crucifix.

During my time in Cornwall, I also went to classes in St Ives School of Painting, which was fantastic.  It was great to work in the famous Porthmeor studios, listening to the sound of the sea. 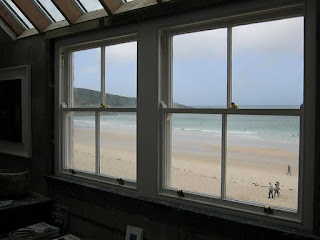 There are some absolutely wonderful classes going on there, including Lanyon's Landscapes, which consists of a trip to Little Trevalgan and then working in the studio with mixed media collage and  paint.  There's masses of other stuff - expressive printmaking,  elemental painting, and introductions to painters such as Sandra Blow and Ben Nicholson....  Wish I could have gone to more classes!!

Find out more about the classes here.