Skyfall and the Painting in M's Office

Following on from my blogs about the paintings in the new Bond film Skyfall, I've been asked what the painting is in the final scenes where (not giving any spoilers away) Bond receives his new assignment in M's office.

Here it is close up (rather blurry, sorry)... 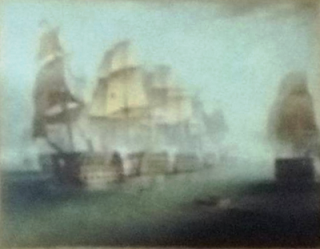 It's HMS “Victory” Heavily Engaged at the Battle of Trafalgar, possibly by Thomas Buttersworth (although there are a number of similar versions by both Buttersworth and other marine artists). Anyway, the important thing is that it's the Battle of Trafalgar.  Given that the paintings in the film have been full of significance, what's the meaning of this painting in the context of a James Bond film?

Skyfall uses the metaphor of Bond as an old warship who is past his prime and no longer needed, through the medium of a Turner painting, The Fighting Temeraire.  Turner's painting, with its sunset and reflections, evokes a feeling of sadness and loss at the passing of an era (here specifically of Britain's naval supremacy), which is in turn applied to middle-aged Bond. 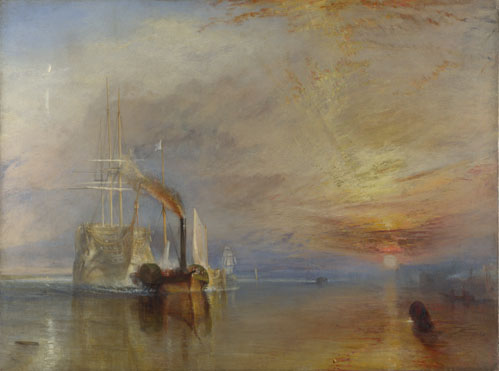 Read about the scene in the National Gallery in front of Turner's The Fighting Temeraire here and  here.

So  what about the painting which the film ends with, showing the Battle of Trafalgar?

The story of the battle is that, after a lengthy and frustrating chase across the Atlantic and back, Lord Nelson finally confronted the Franco-Spanish fleet off Cape Trafalgar on the morning of 21st October 1805. Outnumbered, Nelson thought up an unconventional plan to break the enemy line in two places.  Carnage ensued.  At the height of the battle, a French sharp-shooter, taking aim from the mizzentop of the Redoubtable,  hit the heroic Nelson.  This is the moment captured in the painting.   Nelson was carried, wounded, below decks.  However, he lived to hear that it was a convincing British victory, with the surviving Franco-Spanish ships fleeing to Cadiz.

Skyfall is full of flag-waving Britishness.  It's Bond as a British icon, established for 50 years.  Just as Turner's The Fighting Temeraire was voted 'The Nation's Favourite Painting', so Bond is the nation's favourite spy, in this case overcoming the baddie, Silva, played by a Spanish actor.  The Battle of Trafalgar is the quintessential British victory, with Nelson overcoming the Franco-Spanish fleet by means of a nifty new manoevre, splitting them up and picking them off.

Bond may initially be likened to the Temeraire being towed to the scrapyard. However, by the end of Skyfall, when he receives his new orders, the story arc is such that Bond has been reborn, rejuvinated.

Now, here's the clever bit with the painting in M's office..

Is this painting therefore telling you how to interpret the battle at Skyfall (the house)?  It's actually the Battle of Trafalgar - where, against the odds, resourcefulness and unconventional tactics lead to a great British victory.  That reading would even suggest that M is a Nelson figure - think of her final scene, and the parallels with Nelson (even down to the kiss).

But perhaps the most interesting parallel is that when Nelson led HMS Victory to engage the enemy at the Battle of Trafalgar, right behind him was (wait for it) the “Temeraire”.  That's the same Temeraire that Turner painted, and which appears earlier in the film.  But now we see it in its youthful heyday, rejuvinated, reborn, back in the thick of the action, literally right behind British Victory.

Now there's a mission statement for the next Bond film!

Of course, the reason that there's paintings of ships and sea references at all in M's office is a reference to Dr No of 1962.

M's office is full of ship paintings, models, and naval references such as telescopes.  Have a look at the drawings behind Bernard Lee here.

And also behind Sean Connery here.

Fleming himself occasionally referenced M's career in the British Navy, so it's not mere set-decorating by the film-makers.

The fact that it's a reference in Skyfall which is then extended and developed into the meaning of the film itself is a nice touch for film fans in the franchise's fiftieth anniversary year.

You might also be interested in this blog on the painting in M's office in Skyfall HERE.
Posted by Judith at 16:27