Whilst I was down in London taking the photographs for the paintings that I blogged about yesterday, I paid a visit to the Cabinet War Rooms.  They're just round the corner from the location of the Sunlight on Big Ben painting.

The Cabinet War Rooms were very interesting, but perhaps the item on display which most caught my attention was the large red velvet romper suit that Winston Churchill invented and wore as appropriate attire in which to fight a war. 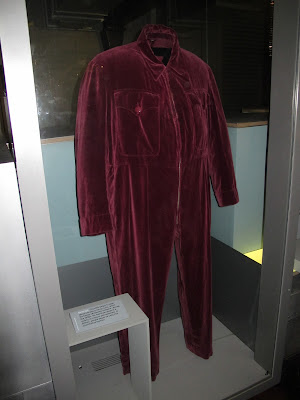 Quite a sartorial statement, isn't it?

Nowadays, in these times of 'we're all in it together' austerity (although hardly on the same scale as the second world war), with the "Keep Calm and Carry On" wartime slogan on every tea-towel and mug, it was interesting to see that Churchill chose a comforting soft romper suit as his war uniform.  It's a onesie.

People of a certain age and/or living outside the UK will probably be looking blank at this point - this is a onesie, an all-in-one item of clothing beloved of stag parties and often based on an animal theme.  The shops are full of them, and they're very much a sign of our seeking-comfort-in-a-crisis times. (Again, people of a certain age/any age/living inside or outside the UK, may not recognise that it's Nick Clegg pictured here wearing it.  No, I've no idea who he is either, but apparently he owns a large green onesie.)

Now, apart from the comfort angle, the Churchill Onesie had a practical reason.  Winston could be dressed double-quick in order to get from bed to bomb shelter, in something that was stylish and singled him out as the Prime Minister.  For the 1940's, the siren suit is a pretty unique object, and I'm not sure how he got it on war-time ration coupons (because there's other examples of other Churchill onesie's in other collections).

Churchill also painted to get away from the stress of war, and as relief from the bouts of depression from which he suffered.

Here he is in his studio at Chartwell.

He wasn't a bad painter either.

Sunset over the Atlas Mountains - 1935 in Marrakech 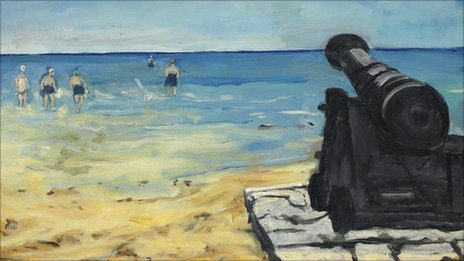 Painted in 1938, it's an unusual composition as the painting is dominated by the brooding dark menacing shape of a cannon on the right hand side, which still guards the seaward approaches to Walmer Castle.

As people happily bathe and play in the sea, the large black shape of the gun looms over them.  Is it the threat of war, or a manifestation of Churchill's feelings of depression, his 'black dog'?

The year after becoming wartime prime minister, Churchill was appointed Lord Warden of the Cinque Ports and Constable of Dover Castle in 1941.  He and his family enjoyed bathing in the sea and the beach was one of his favourite subjects to paint.

Although it is said that Churchill loathed to give away any of his art, family legend suggests he had always promised a painting to General Ismay, Churchill's chief military adviser during WWII.  While visiting Churchill's studio Ismay chose The Beach at Walmer because, to him, it represented Churchill: standing guard on the coast of England.