Very often, you get the sense that galleries put on exhibitions of Impressionist painters merely as a way of selling a lot of fridge magnets in the gift shop.

So it is rare to come across an exhibition so thoughtful, thought-provoking and comprehensive as Inventing Impressionism at the National Gallery in London.

It's an exhibition about landscape as a business, and a lucrative one at that.  The subject of the show is Paul Durand-Ruel, the Parisian art dealer who pioneered not only the Impressionists, but the invented the whole profession of the modern art dealer. This art market business is an area considered too mercenary to touch on in art schools, who instead concentrate on ideas rather than studying history, learning craft, or preparing for a career.  By insulating today's students from the realities of the art market, art school ill prepares them for life as artists, and completely misunderstands that the vehicle for creativity is the creativity of business itself.

This exhibition shows how integral the art market quickly became to the working lives of the artists it facilitated.

The exhibition opens with a recreation of Durand-Ruel's Parisian sitting room.  Here, amidst fine furniture and fittings, are paintings by Renoir, and Monet, and sculpture by Rodin.  Even the panels on the doors are painted with still lifes by Monet, reminding me of the Bloomsbury Group decorated farmhouse at Charleston. As the son of an art dealer, the Barbizon School painters and new-fangled Impressionists were Durand-Ruel's passion.  He raised his sons and grandchildren to expand the firm, and the painters quickly became an extended part of the dealers' family.  Renoir's portraits of the Durand-Ruels meet you with their direct gaze and piercing eyes.

By decorating his own house with the 'merchandise', Durand-Ruel was doing a number of things when he invited his friends and clients in to his salon.  Firstly, he was demonstrating how much he personally admired the new circle of painters, who were largely rejected and shunned by the art establishment.  And he was also demonstrating how the paintings and sculpture would look in a domestic setting, one of taste and class.  He was making the art desirable, accessible, fashionable.

The second room of the exhibition shows the beginnings of Durand-Ruel's business.  When he took over from his father in 1865, he seized the chance to corner a market he felt had been unjustly ignored. Using methods he borrowed from the world of finance, he found backers and partners for purchases, sought exclusivity deals, worked to push up prices at auction, and brought his product before the public through exhibitions and publications. Being savvy enough to take these models of business and marry them with his knowledge and love of modern painting was where his truly creative genius lay.

This is Courbet, who along with Corot and the Barbizon painters, painted with an earthy realism which was spurned by the state-run, jury-selected Salon, and polite society in general. This was exactly the reason why Durand-Ruel loved the work, because it was fresh, modern and alive.

Rejected by the Salon, Courbet's Apples are bruised, pitted and imperfect, and were in fact painted in prison when Courbet was in the clink for six months for being a revolutionary in 1872.  These are not idealised fruit, they are - quite literally - fallen fruit.  And painted by a radical!  No wonder they were rejected tout de suite by the Salon - and no wonder Durand-Ruel gave them pride of place in his gallery window. Gustave Courbet, Woman in the Waves, 1868


This is Venus, but a Venus who's been around the block a million times, and who doesn't give a hoot about showing off her underarm hair.  It's a subversive image (although not as graphically subversive as L'Origine du Monde - a link which is perhaps wise not to open at work), which had Durand-Ruel splashing out a record price to Courbet just 3 years after he'd started business.

This room also displays a lovely work by Millet, which he again paid a record sum of 20,000 francs in 1872 (the painting at that time being about 15 years old).


It has a silent, earily other-worldiness spirituality about it which oddly reminded me of Paul Nash.


The next section looks at Durand-Ruel in the new market of London.

In 1870, France declared war on Prussia, and Durand-Ruel shifted a large quantity of stock to London for safety.  Turning this necessity to his advantage, he opened a gallery in New Bond Street and started to hold regular exhibitions.  This was a new idea - normally exhibitions were retrospectives of dead artists.  Here, they were events to promote living painters, in whose careers patrons were invited to invest and participate.  Durand-Ruel brought a new, fashionable event to London from the Continent, and in the process, exposed his painters to a fresh market.

Durand-Ruel was also introduced by Barbizon painter Daubigny to two other painters who were similarly taking refuge in London at the time - Monet and Pissarro.  Both were out and about, painting en plein air, and depicting modern life as they saw it.  Durand-Ruel snapped up their work. 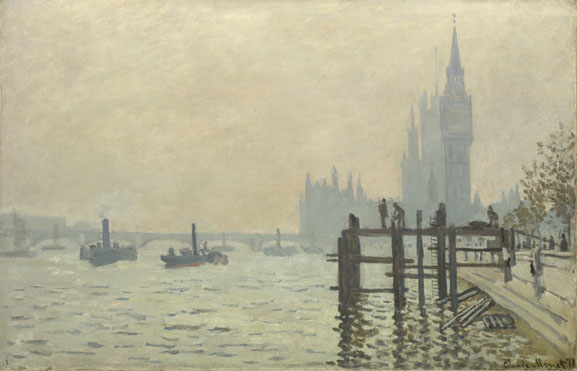 
Using an off-white ground, Monet uses a limited palette of greys, salmon pinks and yellow ochre to create his atmospheric picture.  There's a beautiful use of negative space in the sky, made up of a myriad of similar sized brushstrokes, contrasting with a range of different, more fluid mark-making used to create the effect of the water and the trees.

The wonderful thing about the Inventing Impressionism exhibition is that it flows, with each room feeling like a natural progression, containing a topic which doesn't feel forced and with paintings that are entirely pertinent.  Thre's a logic running through it all.  Nor is it a show which is overwhelming.

The next section is all about Edouard Manet, a challenging artist whose rapidly painted work was constatly rejected by the establishment, and he struggled to promote his work.  Well, guess what...

Returning from London in 1872, Durand-Ruel found two Manet paintings (The Salmon and Moonight at the Port of Boulogne) at another artist's house.  He bought them on the spot, and set out to find more.

All the paintings in the Manet room of this exhibition were purchased in a single month, as Durand-Ruel descended on Manet's studio and bulk purchased 23 paintings for 35,000 fancs - 40 times the annual wage at the time.  It made Manet instantly spectacularly rich, but was a huge gamble for Durand-Ruel (you have to wonder what else he gambled on, and lost).

Edouard Manet, Moonlight at the Port of Boulogne, Oil on canvas 1868 (Musee d'Orsay)


This strategy - of purchasing an undiscovered artist in bulk, salting away the stock, creating an excitement about it, and therefore increasing the 'worth' of the artist, then controlling the release of pieces to a receptive and eager market at increasingly higher prices - was also famously followed by Albert Barnes (he of the Barnes Foundation in Philadelphia).  Create a market, starve the market, feed the market.

Barnes found impoverished Chaime Soutine sloshing about in paint and animal carcasses in his squalid Parisian flat-come-studio in 1924, and bought up 52 of his paintings for cash on the spot.  (The amount varies depending on whose letters you read, but it works out at between $15-30 per painting. Barnes considered he got a bargain, which he most certainly did from the less-than-savvy Soutine, especially when you compare what Durand-Ruel was paying his artists.  However, Soutine was ecstatic, and immediately ran out of the flat with the cash, hailed a taxi, and headed to Nice in the south of France.)  Barnes, in creating a market in an artist through all his contacts, was suddenly sitting on a small fortune.

But back to Manet.

The most arresting painting in the exhibition here was, for me, The Salmon. In a loose and fluid style, Manet is referencing 17th century Spanish painters such as Velasquez, and Dutch still  life paintings in the balancing of the knife on the edge of the table, with its implications of the precariousness and fragility of life and its ephemeral values.  It's also a tour de force in portraying different textures, especially the skin of the fish.

However, what really struck me here was how what Manet was doing has elements of Cezanne.  Take a look at this - here's that knife motif again.. 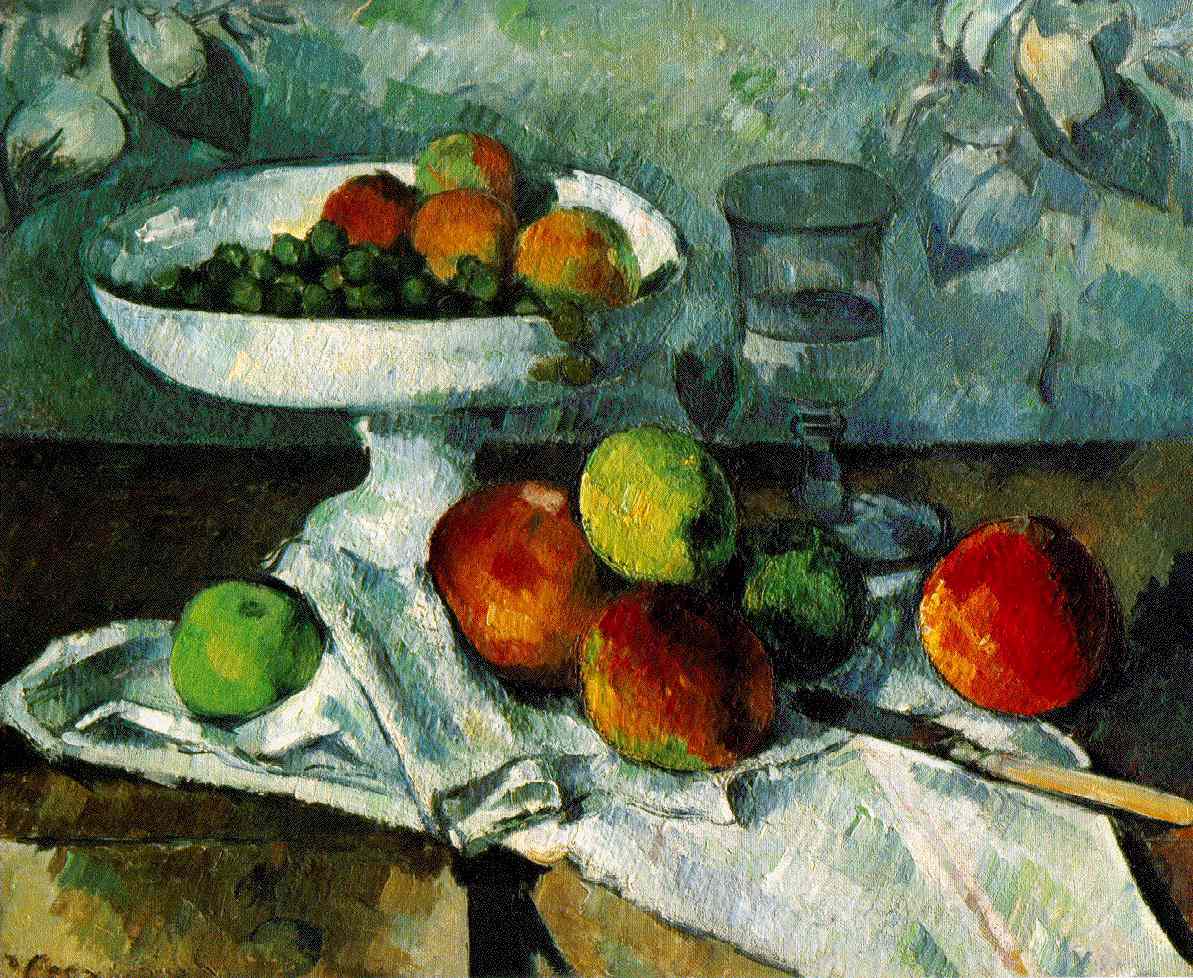 But more notably, here's Cezanne displaying a lot of the elements from the Manet, if you look closely. 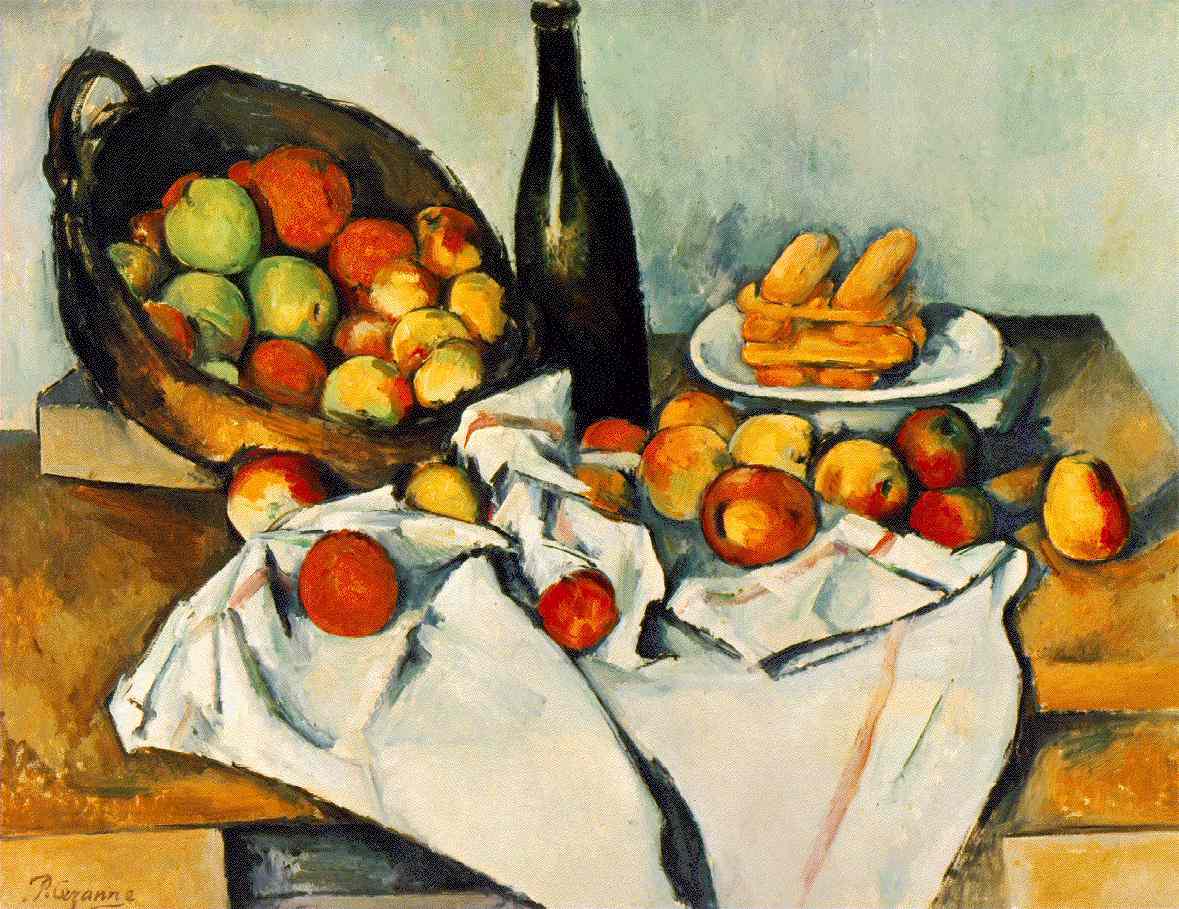 Cezanne was the father of modern painting and abstraction.  He begins to look at objects in new ways and release them from traditional depiction, to look at space and form and volume differently.

So in his still life, although initially making sense as a basket of apples on a table with a bottle and some fruit scattered on a cloth, it is actually spatially ambiguous.  The table edges don't line up.  You are unsure how to read the surface that the still life sits on.  The ellipses of the bottle, the plate and the basket don't quite make sense.  Not all of the fruit could occupy the space that they sit in - objects are both flat and round at the same time, two dimensional and three dimensional.

Now take a look at the Manet.  Look at that line of the table running along the back.  It doesn't add up either - it's higher on the right than the left.

Nor do the ellipses of the glass or the ceramic object on the left completely add up.  The bowl on the right is tipped up unsettlingly.  It's not overt, as these elements are not the thrust of the painting, Manet's not breaking all the rules all at once.  It's too early for that - this is a painting 20 years before the Cezanne, and Manet was, in his painting, already challenging enough conventions as it was with his virtuouso paint handling.

What Manet is saying is, "Look, I can be the next stage in the still life tradition, but I can do it in a new, modern way - and my picture is all about fishscales and lemon and cloth and glass and china, but more importantly it's all about PAINT".

But, I would argue, those little seeds of abstraction which Cezanne potted up and grew on are right there as well.

And there we must leave it until the next blog, because there's plenty more.