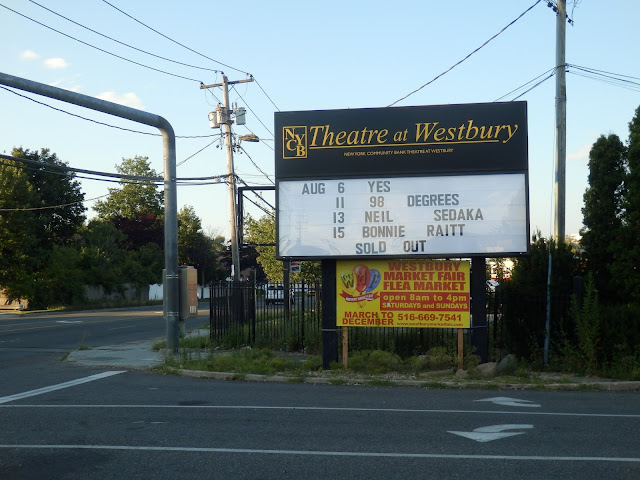 Now, the very interesting thing about Westbury is that it is a theatre in the round, with a revolving stage.  I've see Yes in the round before in the 90s, but it's a very rare event to see them like this. 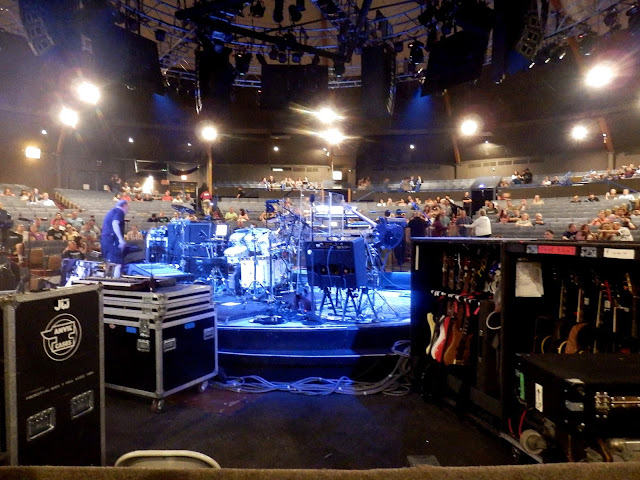 As you can see, we were sitting by what is called on the theatre schematic 'the orchestra pit' - a view through the cabinet of Steve's guitars.  The advantage is that we were slightly higher up and in the eyeline of the band, whereas at the actual front of the stage, you are quite low down. 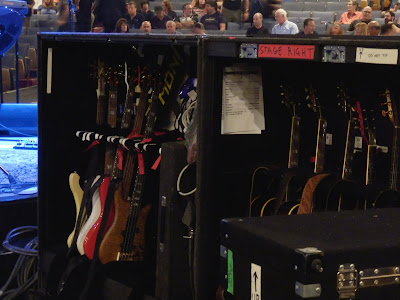 Steve's guitars.  Don't, whatever you do, touch them. 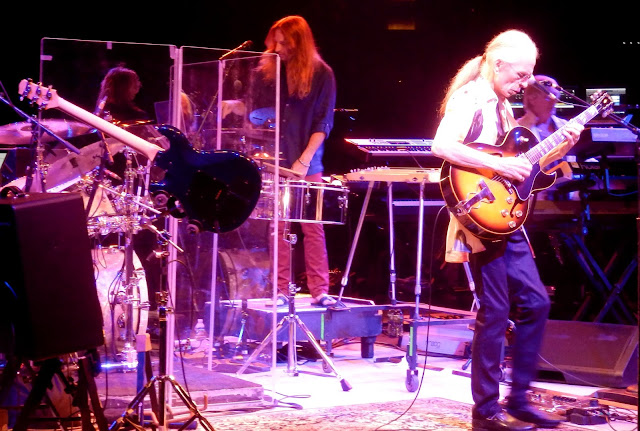 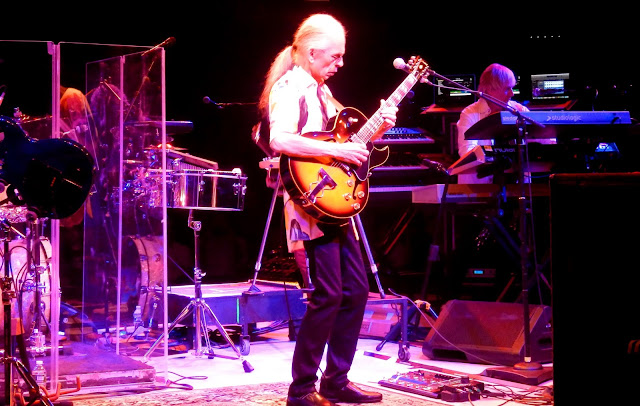 The stage is not only in the round, but it is also revolving very slowly.  First one way, then the other, like a Disney teacup.  It's a very intimate space, and with the audience all around, it's a very centralised energy that builds up.  It's obviously quite different for the band as well, who have to find each other in different places from usual to catch their eyes for various cues. 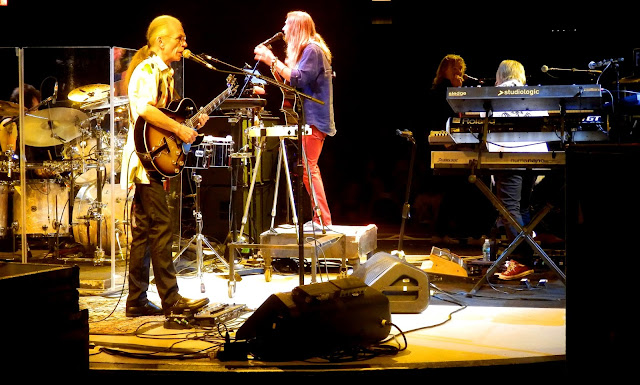 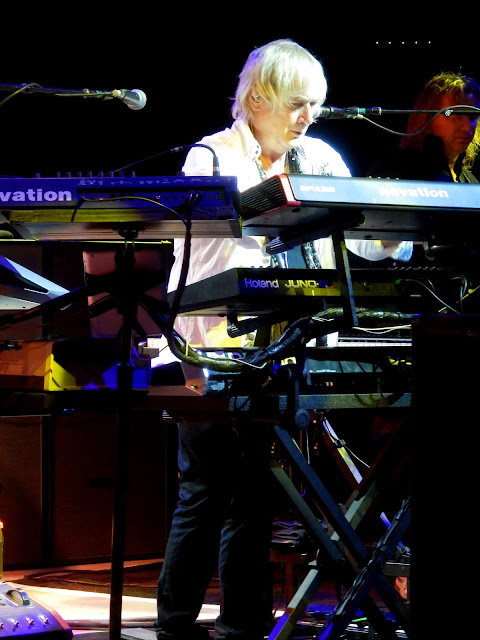 I suspect the set up made Geoff slightly uncomfortable.  He said it was fun, but it's quite exposing if you're used to being in your own wee area at the back of the stage. 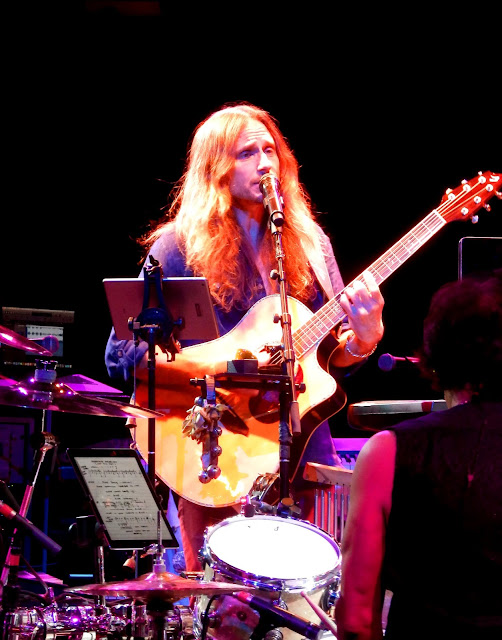 Jon and Jay.  Jon also said it was fun, keeping everyone on their toes as everyone is in a different place throughout the set.  It's also quite a bear-pit, with all the energy of the audience focussing downwards into the middle.  It's very intense, with faces all around you. 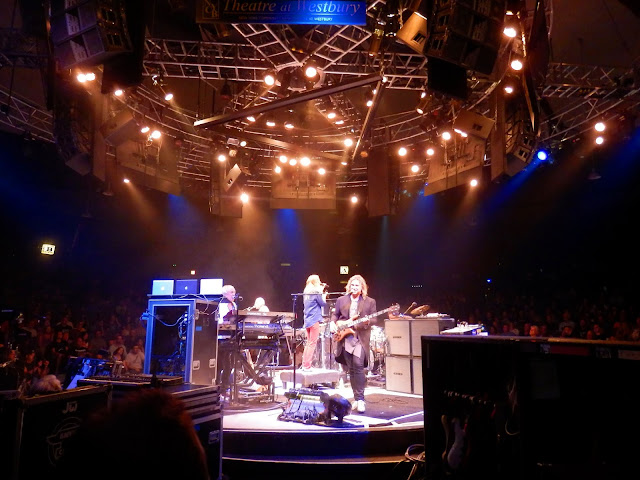 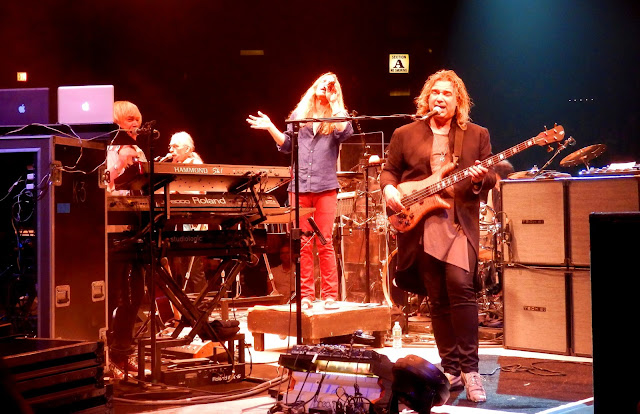 Jon was on a little raised platform in the middle. 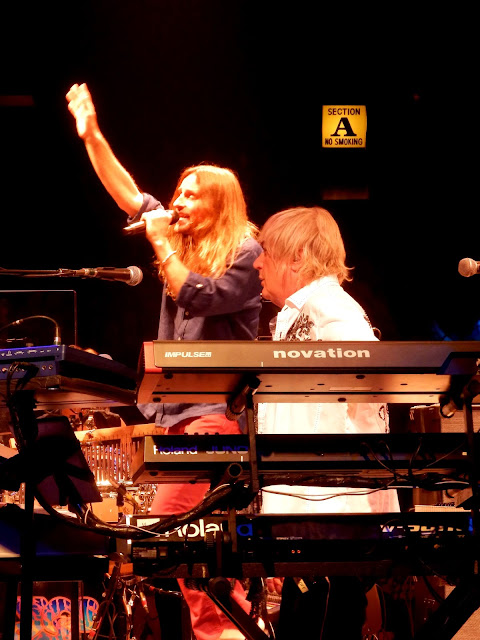 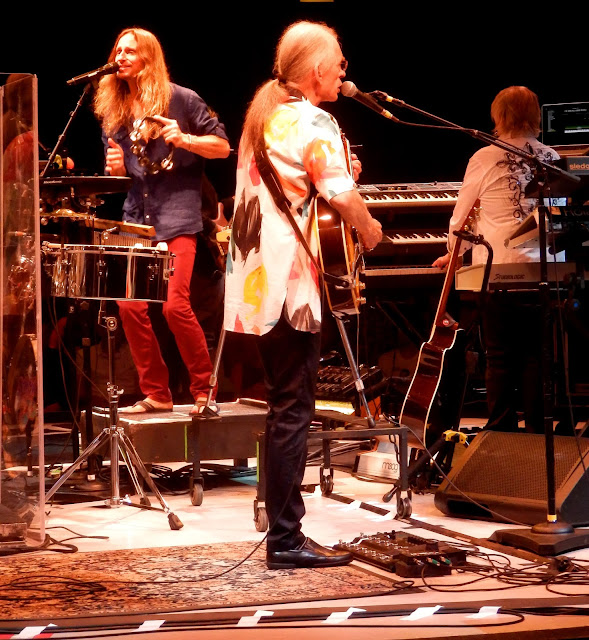 Steve on his rug. 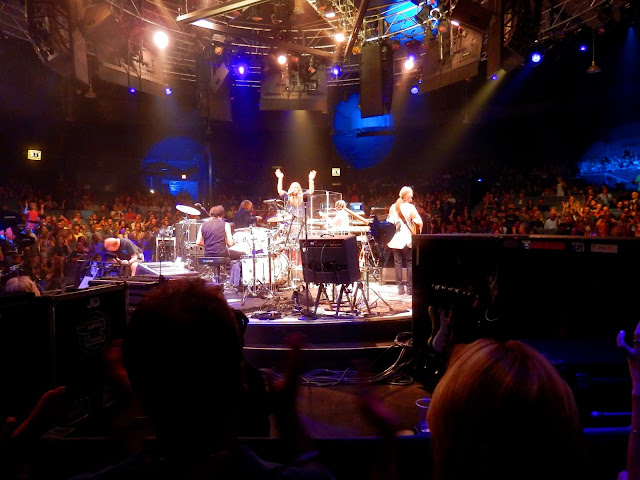 It's like they're being abducted by a giant UFO. 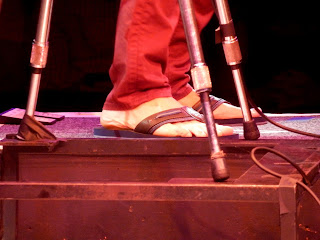 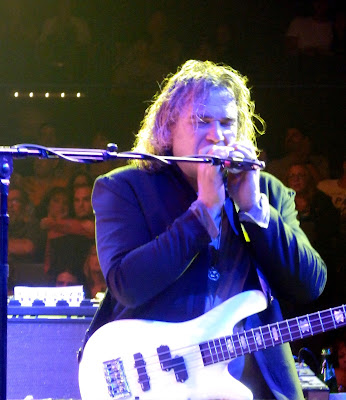 Sad preacher nailed upon the coloured door of time... Billy plays the harmonica, just like Chris did, which is a little emotional jolt. 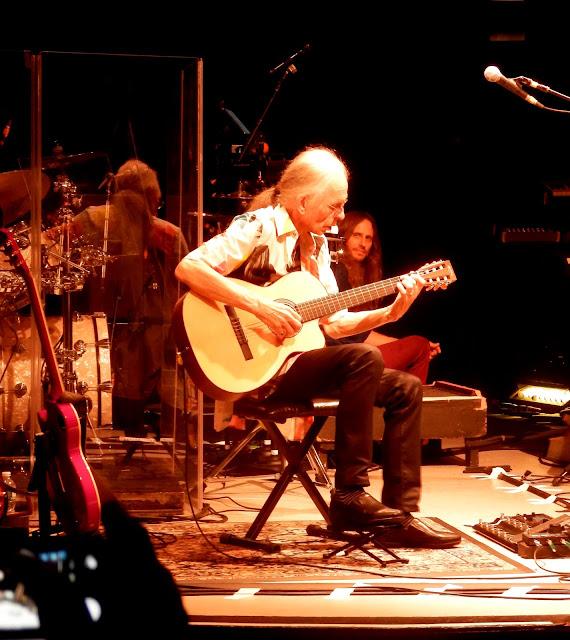 I like these photos because of the way Jon is sitting, watching and listening whilst Steve plays Leaves of Green. 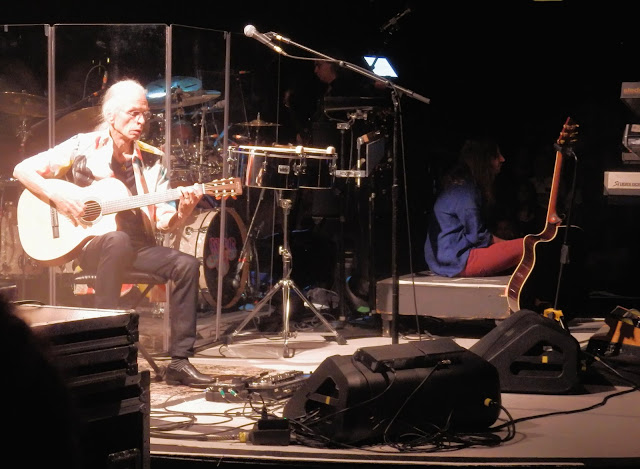 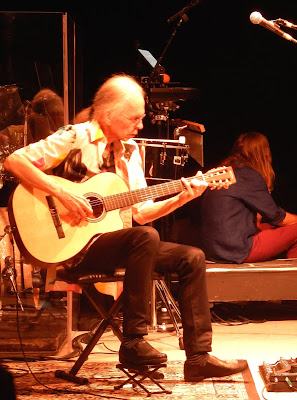 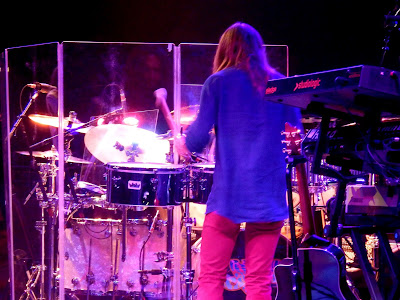 This is the all-hands-on-deck percussive part in Ritual... 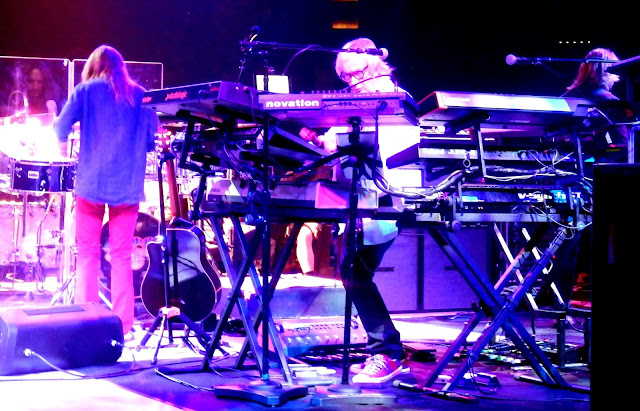 ...which means glasses-on for Geoff. 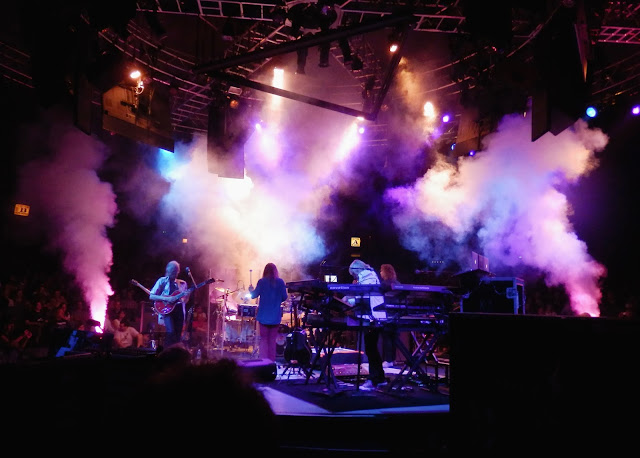 
It was only with the revolving stage that you could see all the work that everyone is doing that you really don't appreciate from a static front view.  For example, at the very very end of Ritual, think of the drums.  Can't think of any?  Well, Jay is still working away, adding all sorts of delicate texture to the piece.

There is a huge amount of finesse and performance going on from all of them that you don't even appreciate, which goes to create the fullness of the sound.  And you just don't get any of that from a rubbish recording made on someone's wobbly i-phone twelve rows away and posted on Youtube.  You get it, and the emotional punch which is so integral to Yes music, from actually seeing it in front of you.  When you see it, and all the interaction and complexity going on, it helps you understand it. 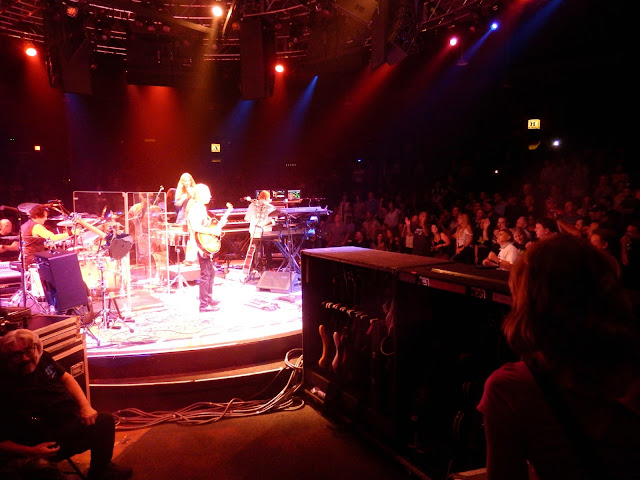 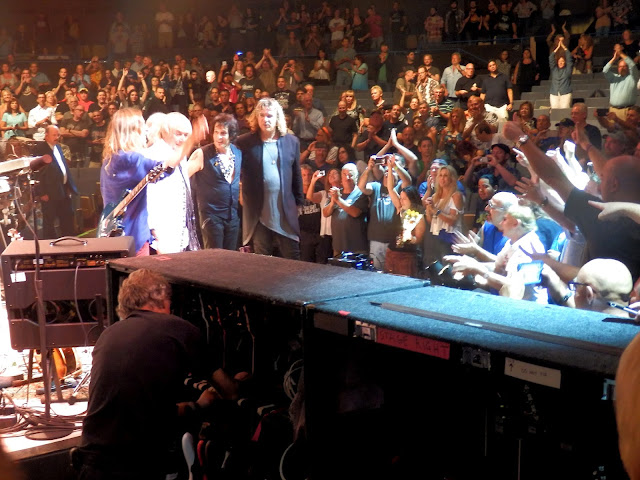 Have a look at the blogs of my other Yesshows,  - Wallingford Connecticut and Staten Island.
Posted by Judith at 13:09