A Visit to the Hepworth Wakefield

I braved the Snowpocalypse at the weekend to travel down to Yorkshire to visit the Hepworth Wakefield Gallery. 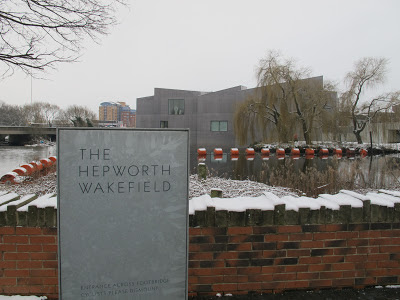 This is a specially built art gallery to house the work of the sculptor Barbara Hepworth.  She was born in Wakefield in 1903 and trained briefly at Leeds School of Art, but she moved to London in 1921 and then later to Cornwall.  She's probably better known as a Cornish artist, with her famous studio and workshop in St Ives.

I was there not only to see her sculptures, but also to see the exhibition of her little-seen post-war drawings made of surgeons in hospitals.  More of that tomorrow, but here's a few photos of the Hepworth Gallery itself.

Designed by David Chipperfield Architects and finished in 2010, the gallery is situated in a rather industrial part of Wakefield on the banks of the River Calder.

Whilst softened by its natural setting, it looks quite brutally angular and shed-like, constructed of pigmented concrete which was created in-situ. This is supposed to give the building a sculptural appearance that echoes the shapes and forms in many of Barbara Hepworth’s sculptures.  Here's the building... 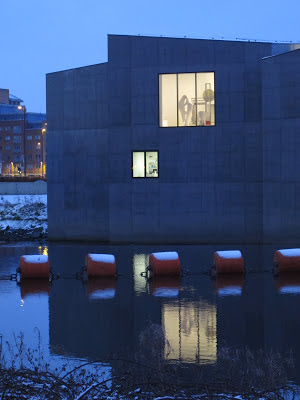 Here's one of her sculptures...

I would say the building is a far more masculine structure than anything produced by Hepworth herself. Her work, whilst often massive in scale and constructed of similar materials, nevertheless always has a very sensuously feminine and nurturing quality to it (as you can see from the above egg-like example), contrasting the internal and external spaces and forming tensions and dialogues with its surroundings.

I guess that's difficult to get in a functional building, although a building has, by its very definition, internal and external spaces to exploit and contrast against each other.

It's certainly a building which forms a dialogue with its surroundings. 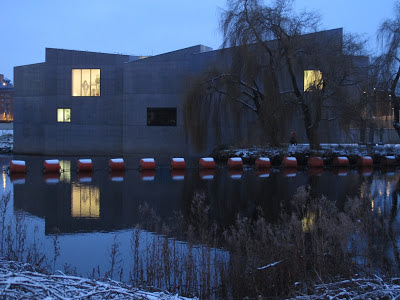 This is the river right beside it. 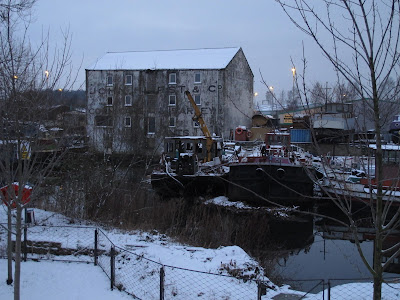 These are the canal boats from the bridge that goes across to the car park.  I like that the siting of the gallery gives a good sense of the roots of Hepworth herself, grounding her work in a good, plain, no-nonsense working setting. 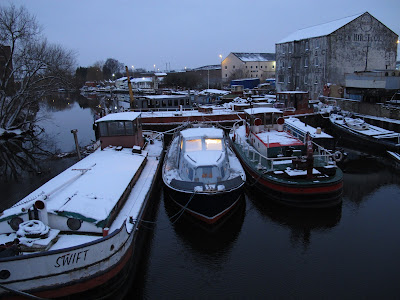 I've visited the Hepworth a couple of times now, and it's a shame however you can't take photos inside.  There are a number of very interesting spaces (with lots of nice natural light), especially the room with plasters and items from her workshop,showing the process by which the sculptures were created.

However, it's very frustrating not to be able to note-take by taking photographs of the pieces, as it would be very useful indeed as an artist to have details of the patinas and plinths and the surface mark-making, which you just can't get from books or by making sketched notes yourself.  So much of the excitement and meaning of the sculptures comes from close examination of and response to the sensuality of the surfaces.

Finally, here's photo of nearby Wakefield Cathedral, which is currently undergoing a facelift, and looked very pretty with the post-Christmas lights in the trees 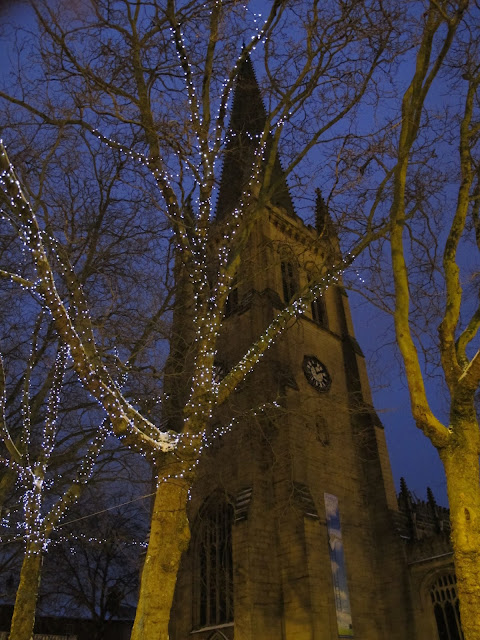 More in a later blog about the Hospital Drawings exhibition.

Read about the exhibition in my blog HERE.
Posted by Judith at 03:32