As I mentioned in a previous blog, despite Snowmageddon, I was down in Wakefield at the weekend to see the exhibition of Barbara Hepworth's little-seen Hospital Drawings before the show finishes at the beginning of February.

It doesn't sound very exciting, but in fact it turned out to be a really tremendous show.


Take a look at this photo of Hepworth.

Look at any photo of her, and you'll see someone carefully controlling their image.  In this picture, there's something very knowing about the position of the hammer and chisel, the way she stares intensely into the distance.  She's a woman trying to make it in a man's world, and whilst she carved curvy feminine pieces all about motherhood, I bet she was as tough as the stone she's carving.  She had to be.

But back to the show.  Best known as a sculptor, Hepworth was restricted in this in the 1940s because of childcare commitments - she had four children, including a set of triplets by Ben Nicholson.  Her daughter Sarah had to have an operation in hospital, and Hepworth struck up a friendship with the surgeon.  As a result of this, she was invited to attend a variety of surgical procedures at the hospital in Exeter and in London, and produced around 80 works.  These drawings, made during 1947-49, were on the cusp of the birth of the Health Service.  Thirty of them are in the exhibition.

This is 'Radial' made in 1947.  Have a think about the word 'drawing' and then a good long look at the image.

It's a very different way to make a drawing.  It's not drawn on to paper, it's scratched with a razor into a board covered in a white plaster-like ground - Hepworth talks about using the razor to draw in this way as having the feel of a 'bite' into the ground.

The gesso ground Hepworth used was made to a special recipe with enamel paint, white lead and chalk (as used by husband, artist Ben Nicholson).  Over the top of the white ground is a thin wash of oil paint, so that the white of the scratches shows up, then pencil lines are drawn on top of the oil and the white scratches.

This sgraffito gives a sculptural, three-dimensional feel to the figures,  like the drawings of Henry Moore. This is a drawing of an operation - and Hepworth's own daughter had recently gone through the trauma of an operation - and yet none of that sense is here.  This is a serene, calm scene, and as with the majority of the drawings, there is very little to do with the depiction of the patient. The patient is the reason for the surgeons to be there, and yet is strangely absent, usually reduced to a vulval-like opening from which the other components of the composition whirl out like a Catherine wheel.

The drawings are all about hands, cat-like eyes, masks, and the tools of the art of surgery.  The gowns render the bodies into genderless, timeless, simplified  shapes, with the sweeps of the lines of the surgical scrubs forming sensuous links between the concentration of hands and the eyes.

The more you look, the more sensual and voyeuristic it becomes, as you are looking at something private, something usually unseen, something about the balance between life and death.

The figures are concentrated into a shallow dramatic space, literally an operating theatre, with an almost religious, ritualistic sense.  The surgeons are skilful, powerful, mysterious, other-worldy - like saints, almost.  Your life is in their hands - literally.  This, added to the fresco-like quality of the drawings and simplified shapes, reminded me of Giotto's frescoes in the Arena Chapel in Padua.

The surgeons are the centre of the drama, sometimes with acolytes of theatre sisters, or even, it has been suggested, the figure of Hepworth herself (with her characteristic high forehead).  Is that her on the left, observing?

Here, the emphasis is on the tools that the surgeons are using, which are very similar to those used by a sculptor.  There is a clear identification between Hepworth the sculptor and the art of the surgeons.  She, too, is part of this drama of construction, reconstruction, renewal and creation.

Hepworth made many studies of hands, and hands manipulating instruments are the focus of the compositions of the Hospital Drawings. 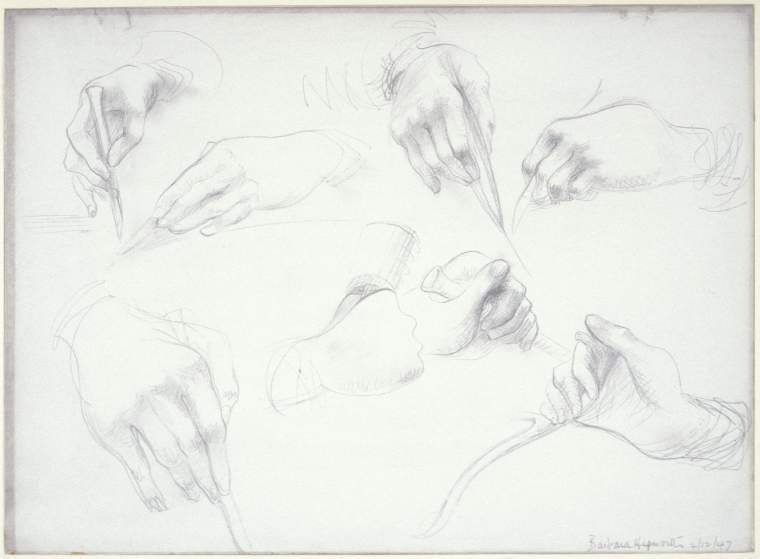 These are studies about tools as extensions of the hand.  There is a real empathy with the feeling of the tools in the hands, how they can be manipulated and what they can achieve, in the same way that a sculptor manipulates their materials.  In executing the drawings, Hepworth is sensing the surgeon's hands as they work in the same way she works, and puts that empathy into the drawings, which echo this by flowing across the surface like tactile waves.

Henry Moore similarly made studies of his own sculptor's hands quarter of a century later.  His look vulnerable. Hepworth made only one self-portrait of herself, but made several casts of her own hands, firm and purposeful.

And this is a bronze of the hand of the surgeon who gave permission for her to attend the operating theatres, Norman Capener. Capener and Hepworth became friends during the hospitalisation of Hepworth's daughter.  Capener was an amateur sculptor himself, and Hepworth gave him lessons as return for the favour of letting her observe the operations.
They corresponded about tools (Hepworth, apparently,  helping Capener to design surgery instruments based on her own sculpture tools), and also on the subject of hands.  Capener used slides in his lectures of Hepworth's hands sculpting.  Capener urged surgeons to observe their own hands in action so as to better understand the working of the hands that they were operating on.
They also corresponded about the different characteristics of each hand, Capener assigning masculine qualities of dynamic power and decision to the right, and passive support and precise control to the feminine left.  No sexism there, then.

Meanwhile  Hepworth wrote, 'My left hand is my thinking hand.  The right is only a motor hand.'  So there.  Assistants would describe how she caressed her sculptures with the palms of her hands whilst carving, in a sensual dialogue with the materials. So in observing the surgeons in these Hospital Drawings, Hepworth is actually observing herself at work.  She literally draws with a surgeon's scalpel.  With the surgeons at the centre of their own drama in the operating theatre, they in turn imbue sculptors with a similar heroic status.  And at no point is there any emotional identification with the patient.

Basically, for Hepworth and Capener, with their strong mutual admiration for each other, the roles of surgeon and sculptor were analogous.  Through this, the thrilling creativity of the artist also imbued the surgeon with an exciting artistic genius, whilst the studied skill and social status of a surgeon gave the artist a new level of respectability and gravitas.  And in a post-war society at the dawn of the health service, this was all part of the inclusivity and destratification of the new structure of society.

If you're in South Yorkshire this week, do try and get along to Wakefield to see this show.
Posted by Judith at 16:44