A Midsummer Night's Dream at the Noel Coward Theatre

I was in London over the weekend to visit the 20/21st British Art Fair at the Royal College of Art (where I had paintings on exhibition), and took the opportunity to take in a play in the evening.

I've had tickets to see A Midsummer Night's Dream with David Walliams and Sheridan Smith for over a year now, so was really looking forward to it. 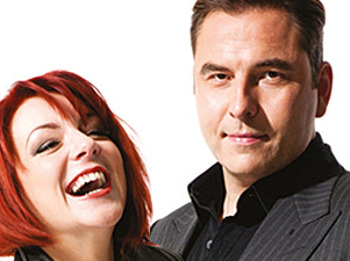 I was in the cheap seats right up in the balcony - not for those with vertigo as I found out, but still with a perfectly good view of the stage.

I'm sure you're all familiar with the play - it's all about the anarchic other-worldliness of the forest inverting the up-tight moral order of the court.  It becomes a magical place inhabited by fairies in moonlight, full of beautiful, bewitching imagery, mistaken identity and mischief.

Sheridan Smith plays Titania, Queen of the Fairies, as a spliff-smoking hippy chick.  David Walliams is David Walliams (as usual) playing Bottom.  Oberon is played by some bloke with an Irish accent that sounds like Sean the voice of my sat nav, and his delivery was so lacking in depth and variation that I kept expecting him to tell the audience to Turn Right.  However, he had obviously been cast for his abdominal physique (which was impressive) rather than his delivery.

Meanwhile, the two pairs of lovers - Lysander, Demetrius, Hermia and Helena - ran about dropping their trousers round their ankles, undoing their dresses and straddling each other with so much six-pack slapstick business that the whole thing resembled a Brian Rix farce.  All it lacked was a Vicar walking in unexpectedly.

It's all very well having a play that's about comedy and fun (because it is a Shakespeare Comedy), but it lacked any emotional depth.  David Walliams was fine - he's been acting Shakespeare for years, after all - but I didn't think he was exactly electrifying.  (I saw David Tennant in Love's Labours Lost simply walk on stage, lie down, and put a hat over his face, and that was just about the most sizzling thing I've ever seen, even from the top row of the theatre.  Goodness knows how he did that.)  But Mr Walliams played Bottom like one of his Little Britain characters. Little Bottom.

Shakespeare's play is full of the most exquisite passages of lyrical poetry, which move through the text like wide glitttering swathes of scattered fairy dust, bejeweling the Dream and giving it form and emotional depth.  But in this production, it just kind of got swallowed up, and you didn't care about any of the lovers and their plight.  It was all just too, too insubstantial. I've seen plenty of productions of Dream, and honestly, you can do both magic and depth. For example, there's a difference between taking Puck's line "Lord, what fools these mortals be" as the keystone of the play, and then going further and interpreting the word 'fools' as 'idiots'. Fools are fallable, and you can forgive people for being foolish.  But idiots are just...idiots.

Given additionally that the line is directed not only at the lovers in the play, but also to the audience in general (meaning that everyone involved in the play, the characters and those watching, are equally capable of being foolish in matters of love) it equates you with the trousers-round-the-ankles brigade on stage.  You're one of this bunch of plain idiots.  And that's just irritating, not illuminating. And it's a play about illumination - la luna, the moon.  Illumination of the human condition.

It's also a political play.  Written around 1590-96, it is an allegory referencing the waning years of the reign of Queen Elizabeth 1st.  Indeed, the huge feminine symbol of the moon dominates the set of this production. The Rainbow Portrait of Elizabeth 1, c1600, Oil on canvas

A Midsummer Night's Dream is exactly contemporary with Edmund Spenser's allegorical (but incomplete) epic poetic masterpiece The Faerie Queene, one of the longest poems in the English language (believe me, I've read it...) which acts, on one level, to praise and glorify Elizabeth.

Both The Faerie Queene and A Midsummer Night's Dream are also, however, making political points.  Elizabeth was, at this time, in her late 50s/early 60s, and childless, leading to problems regarding succession and a period of economic and political uncertainty. Therefore, in Shakespeare's play, as the virginally white old moon wanes, anarchy breaks out and society breaks down.

How does Shakespeare get away with it?  By presenting these ideas as a dream.  "If we shadows have offended,/ Think but this, and all is mended," says Puck to the audience, playing the get-out-of-jail-free card, "That you have but slumber'd here / While these visions did appear."  Yes, it's all a dream.  So that's okay then.

So - were any of these themes touched upon in this production?  Any depths, resonances, complexities, universal truths?

Now, it wasn't just me being in the wrong mood for the play, or not entirely 'getting' it.  Quite a few people left after the interval - which was a pity, because the second half was stronger than the first.

To sum up then - for all the energy and invention on the stage, the spliffy hippy analogy actually suited this Dream - because it was actually not nearly as funny or clever as it thought it was.  It was indeed, as insubstantial as a dream.

For more information about the play, cast, characters and tickets, please go to the A MIDSUMMER NIGHT'S DREAM WEBSITE.
Posted by Judith at 14:12