There's a really interesting short video here about the current exhibition at the Royal Academy in London of work by Finnish artist Helene Schjerfbeck.

Helene Schjerfbeck at the Royal Academy

She's an artist who is little known outside her native Scandinavia, but here's a short crash course, which you can also read here HERE, plus a interesting article on her portraits HERE.  Do go and see the show - women are grossly underrepresented in art history, so it is always good to reappraise and acknowledge their contribution. 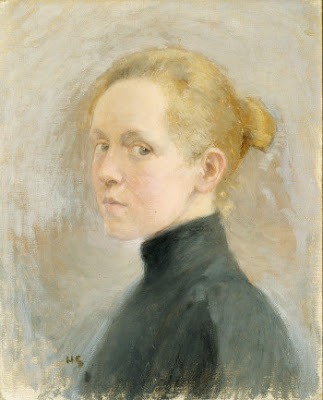 She was a childhood prodigy who overcame family tragedy
Schjerfbeck’s talent was recognised when she was just 11 years old and she began attending art school. Her family could only afford to educate one of their children (her brother Magnus), but luckily her tutors believed in her potential and she was offered a full scholarship. When she was just 13, her father died from tuberculosis and her family fell further into poverty. But Schjerfbeck continued to receive funding, and by the age of 18, she was studying art in Paris on a trip paid for by the Finnish Government.

She was independent and a risk taker Schjerfbeck lived through some of the most seismic shifts in modern art, from Impressionism to Surrealism. But she was never one to follow the crowd and forged her own path. She drew inspiration everywhere from Old Master paintings to contemporary fashion magazines – and in the process she developed her own distinctive, expressive style. Her work defies categorisation and she is often seen as a “painter’s painter” - someone who constantly experimented with techniques, and was willing to push and take risks rather than repeat past successes.

She is little known outside her home country...…but Schjerfbeck’s fame may have spread further, were it not for the outbreak of war. In 1914, she was the only Finnish woman artist who took part in the prestigious Baltic Exhibition in Malmo, Sweden. The event was designed to show off the industry, art and culture of Sweden, Denmark, Germany and Russia but was interrupted when Germany and Russia entered the First World War on opposite sides of the conflict. Some 25 years later, Schjerfbeck’s work was due to be displayed in the USA for the first time, but the outbreak of the Second World War led to the exhibition being cancelled.

She travelled widely throughout Europe Schjerfbeck lived with limited mobility after a childhood fall that broke her hip. Despite the barriers this would have posed to her, she travelled widely during her younger years, making trips to Vienna, St Petersburg, Florence, Paris and St Ives. While in England, her work was exhibited in a gallery on Piccadilly in London, close to where the Royal Academy of Arts still stands today. Schjerfbeck’s travels helped shape her unique style and she drew on everything she saw in Europe once back home in rural Finland. Although she wasn’t able to travel later in life, she never stopped painting. When she died in 1946 she had devoted more than 70 years to her art.

She was never afraid to take a long, hard look in the mirror Schjerfbeck created self-portraits throughout her life but in her final two years, she drew and painted her own face more than 20 times, seemingly fascinated with the physical and psychological process of ageing. As she commented in a letter to a friend, “this way the model is always available, although it isn’t always pleasant to see oneself.” These later works show a move towards radically abstracted figuration that foreshadowed the portraiture of Francis Bacon, Lucian Freud and Frank Auerbach. 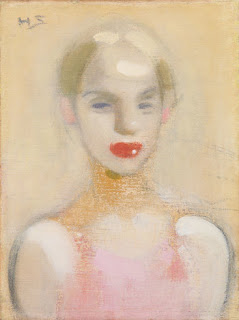 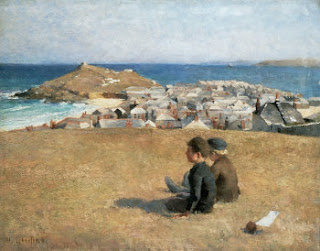 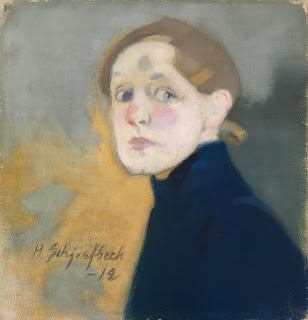