Good news today - heard that I have had work accepted for the 5th Annual Open Summer Exhibition of the Royal Scottish Society of Painters in Watercolour (RSW).

Here it is - it's called Fishing Boat Under Dark Sky, Aldeburgh. 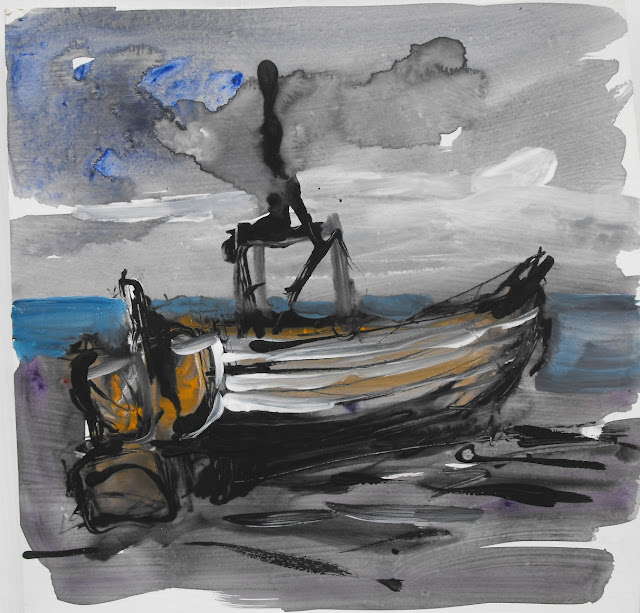 This year, the show is being held in the Meffan Gallery, 20 West High Street, Forfar.  It opens with a private view on Saturday 30th April, and continues until 29 May, Tues-Sat 10am-5pm.  Admission is free.

Do go along and see it if you can!

It's a big one, on a beautiful smooth linen portrait canvas.  I wanted to try and get as much colour and texture as I could into this image of a winter hillside in Argyll, near the Rest and Be Thankful.

Here it is part way through, with the main forms blocked in.   As you can see, I've used a pink ground as a mid-tone. 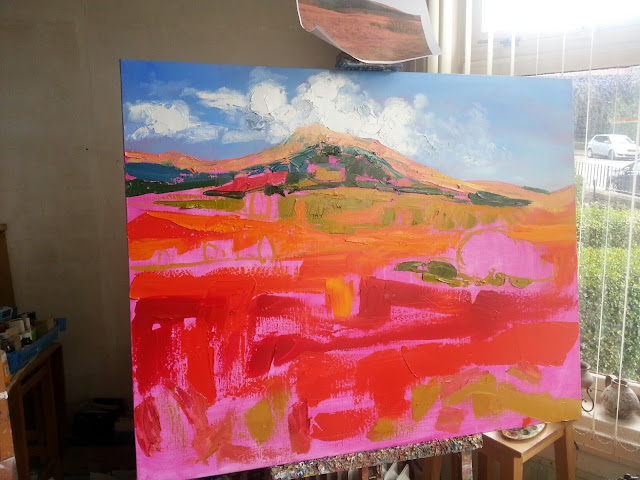 Here's my palette with the colours mixed.  You can also see the brushes and the palette knife I used. 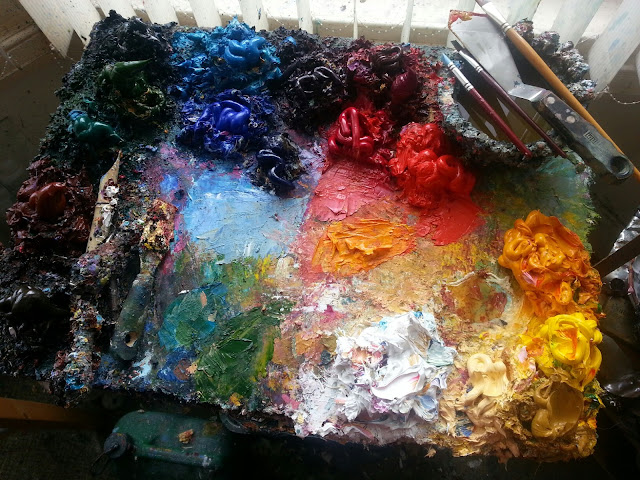 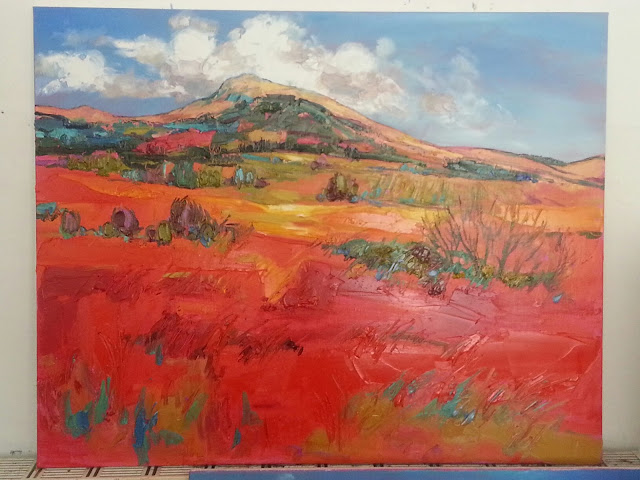 I thought you might like to have a look at one of the paintings which is currently on show in Long Melford in Suffolk. 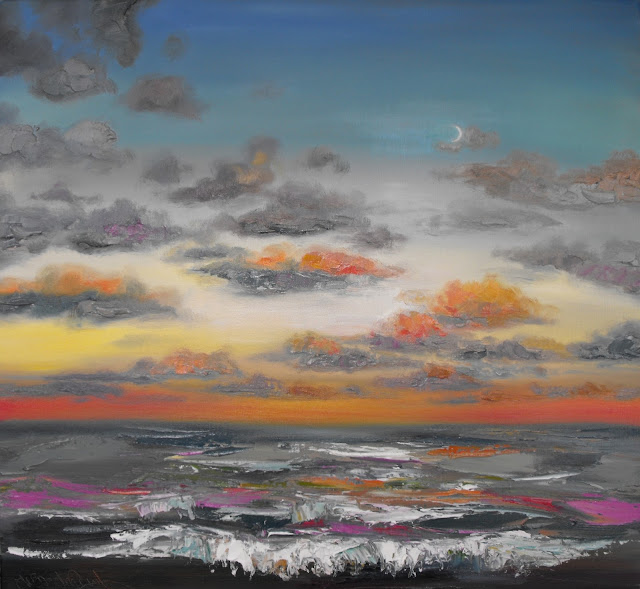 This is a painting of the North Sea at Aldeburgh, with a little crest of a moon in the sky.  I first visited Aldeburgh years ago when I had a show at the gallery there.  Suffolk wasn't top of my list for visiting in terms of finding a landscape to paint - being a Scottish painter of mountains and wild coasts, the flat vistas of this part of England hadn't been on my radar, even though they were, of course, the grist to the mill of painters such as Constable.

However, I soon found that I loved the long, noisy, shingly beach of Aldeburgh, with its big, wide, open sky.  I spent a long time taking photographs at several different times of the year, in all weathers and at different times of the day, just so I could watch the waves, sea the weather coming in, and observe the changes in the colours, and the textures of the landscape and the sea.  Which is just what Constable did. 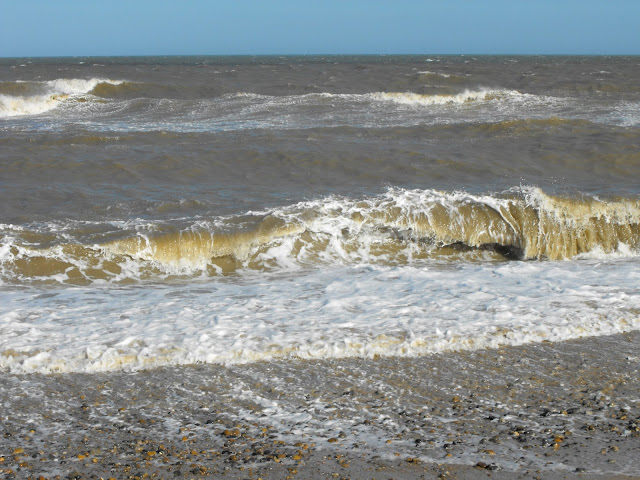 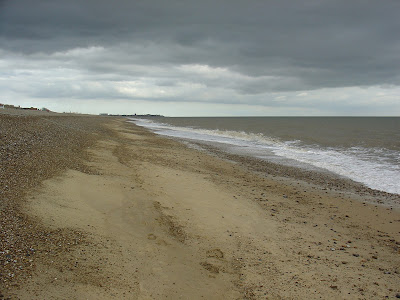 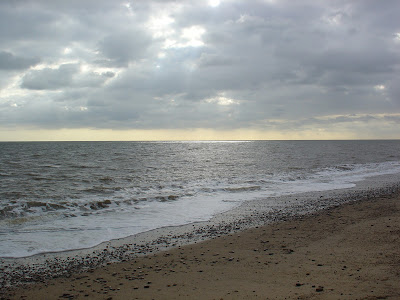 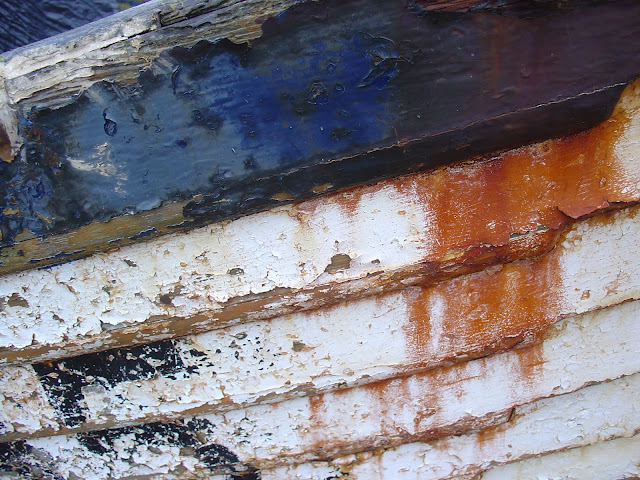 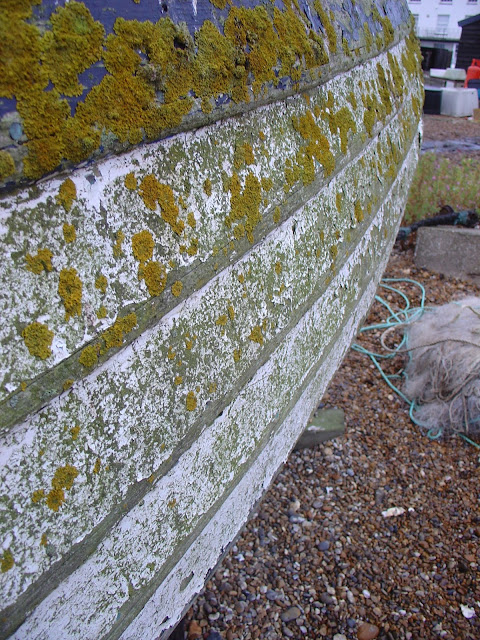 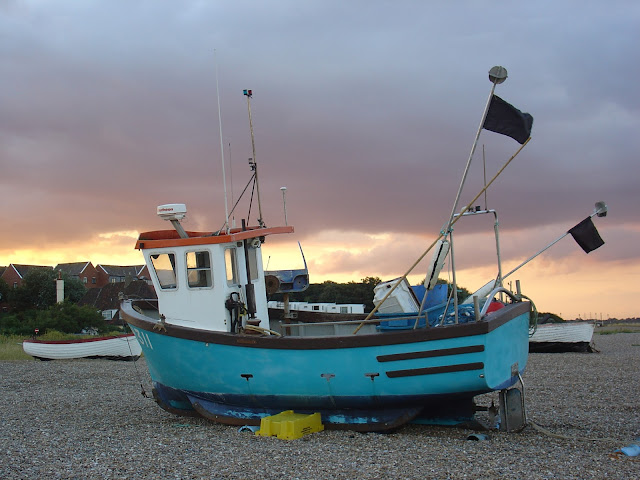 The boats pulled up on to the beach are especial (and now very familiar) favourites.

You can see the other paintings in the show  here.
Posted by Judith at 03:46 No comments:

Email ThisBlogThis!Share to TwitterShare to FacebookShare to Pinterest
Labels: paintings of Aldeburgh

The Rediscovered Caravaggio - Things That Make You Go 'Hmmmmm'

Here's Caravaggio's Judith Beheading Holfernes of 1599, which hangs in the Galleria Nazionale d'Arte Antica in Rome.

Here's Eric Turquin, an expert, standing beside a new Caravaggio - a version of the same subject found recently in a French attic.  If it's authentic, it's worth a strangely precise £94 million.


My, my, wouldn't we all like to find a lost Caravaggio?  Why, it would make our reputation as an art expert.

So let's take a look at the two.

In the top authentic one, a great writhing swag of red drapery hangs in a V shape, emphasising the line of Holofernes' right shoulder and the straightened cutting arm of Judith, which is doing all the work.  The V points down to the nub of the action, the hand of Judith held against the side of the head of Holofernes (who is still alive at this point) and to his eyes which see the hand delivering his own death.  Because of the angle of the head, the light source catches his right eye, allowing us to look into that eye, and to feel his horror and pain, and his horrified realisation that his end has come at the hand of a woman.

Caravaggio often painted wheel-like compositions, which have a dramatic fulcrum, giving energy and movement to the composition, which suggests the action will continue, like the frames of a film.  Look at this, the Crucifixion of St Peter. 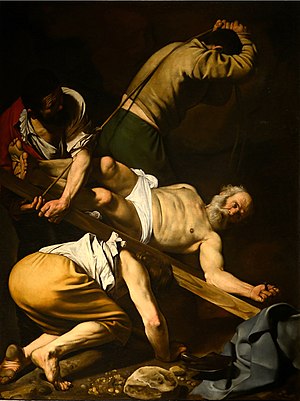 If Holofernes's head is the fulcrum, then out of it radiates the stiff arms of the disgusted but determined Judith, the muscular arms of Holofernes, the blade of the sword, the spurts of arterial blood, and the red folds of the curtain.  There is purpose and direction and strength and logic to all of these movements.  It all makes sense.

Holofrenes's arms thrust back into the painting and down and out of the painting, their muscelature highlighted in chiaroscuro, and the cast shadow of his right arm delineating the string, robust curve of his chest.  The shadows explain the volumes.  They emphasise the masculine V shape of his upper body, marking out his physical strength.  They tell the story of her bravery that this is a big, strong man for a woman to take on, that what she is doing is determination in the face of almost overwhelming odds.

Judith, in her pale dress, is clearly all woman, with her chest emphasised by the full directness of the light source.  Caravaggio is spelling out her femininity - that's the story.  She's a practical gal as well, who has literally rolled her sleeves up to do the job, and has bare arms so she can get a good grip and not get her sleeves soaked in blood.  Her elbows are locked, and a lot of force is being applied.

The old woman's gaze is firmly and unflinchingly on the victim - she's seen it all before and holds a cloth to catch the head in a gesture of practicality.

Let's look at the 'new' Caravaggio. 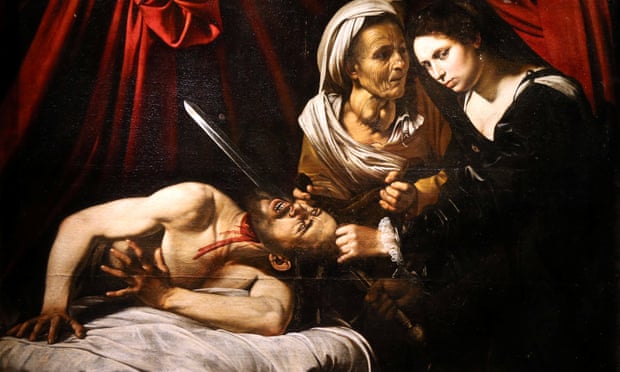 For a start, Judith is dressed in a long-sleeved black gown and head-dress, which means it is difficult to read her figure, or the important gesture of her arms.  Her femininity is hidden.  She's skulking in from the right looking a bit apologetic, and reminds me strangely of Mary Queen of Scots.

Her left hand holds Holoferne's hair in a dainty gesture with her pinky out, like she's picked up a tea-cup.  The hand doing the crucial cutting is in shadow, and there's a curious lack of force.  She's not even looking at what she's doing, but is looking at us.

The angle of the sword in the new painting exactly follows the line and shape of the lower fold of the curtain in the 1599 version, which is very odd.  Except the curtain here isn't a heavy swag of fabric helping us to read the composition.  Now it is an explosion of jarring lines radiating out from somewhere outside the top of the picture frame, with a strange dangly Christmas bauble thing, like a giant uvula.  It's like the whole thing is staged inside Moby Dick's mouth.

The Quentin-Matsys-like old women with a huge goitre is having a bit of a gossip with Judith, like Mme Guillotine doing a spot of knitting as the tumbrils roll up.  She's meant to be standing further back than Judith, but seems to hover almost in front of Judith's pale head.

And here, Holoferne's isn't the powerful, rhythmical figure as before.  Here, his figure is again hard to read, strangely un-3-dimensional, like a squashed toilet roll tube lying on top of a pile of white bedclothes that take up far too much space.  His face doesn't communicate with you.

The 1599 version also has a broad, undulating band of action that runs horizontally across the painting allowing you to read it and make sense of the horror.  It simplifies it all and turns it into rhythms.  Look at the 'new' one.  It has no rhythm when you read it.  It's all over the place.  It's illogical.  There's a small compositional X in the centre of the painting, formed by the sword, the spurt of blood and the cloth held by the old woman, but it's a feeble thing, lacking strength and not bourne out or echoed by further elements in the rest of the composition.  Even the spurt of blood lacks force, with a dweebly curve to it.

And the whole thing, ultimately, has a strangely Flemish look to it..

And then when you look closer - er, no.  It's a compositional and narrative hotch-potch.  Lovely quality.  But not Caravaggio, and I'd say not even Italian.

Many thanks to everyone who came along to the preview of 'Colour' at the Lime Tree Gallery on Saturday!  Hope you enjoyed the paintings.

If you didn't manage along, here's a quick look at the show in the gallery.  The show certainly lives up to the name! 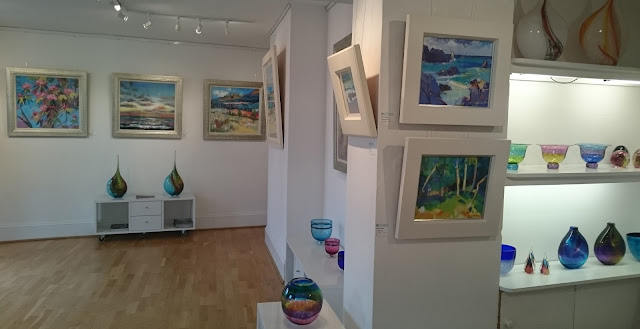 It's on until 6th May, so still plenty of time to see it.

The other exhibiting artists are Pam Carter, Marion Thomson and Peter King. 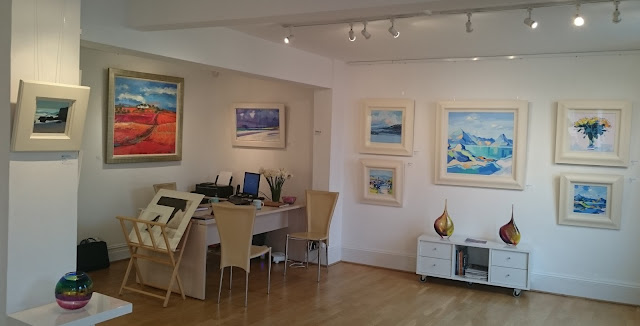 If you're in Suffolk on Saturday, then there's a new show opening at the Lime Tree Gallery in Long Melford on Saturday.

Built around the theme of colour, one of the striking characteristics of Scottish painting, the exhibition showcases the work of four Scottish painters -  Pam Carter, Peter King, Marion Thomson and myself.

View all the work on show here.

Here's one of my paintings from the show - it's a lovely big oil of the beach at North Berwick, with showers and sunshine on the horizon. 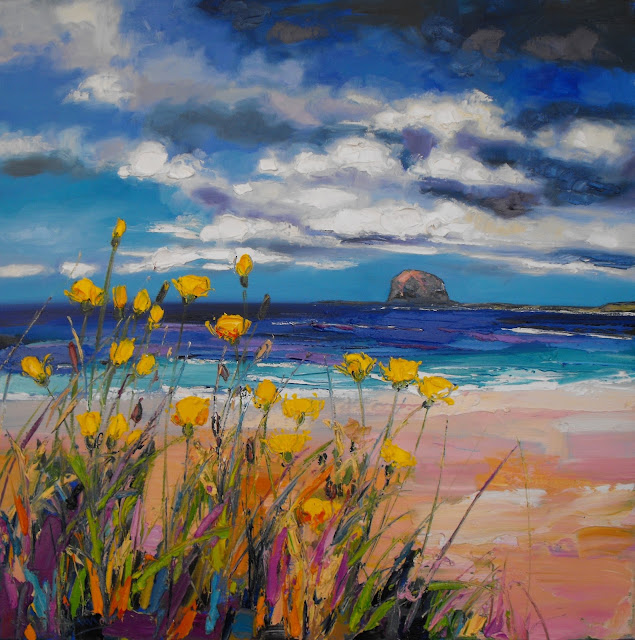 Everyone is very welcome at the Lime Tree Gallery preview, which is all day Saturday (9th April) from 10am - 5pm.  The show runs until 6th May.

Great to hear that, following some years of hiatus and,  the RGI (Royal Glasgow Insitute of the Fine Arts) is going to have an annual exhibition this year.

The hiatus was due to, amongst other issues, the lack of a suitable venue to hold the show in Glasgow.  Prevoiusly hosted in the McLellan Galleries in Sauchiehall Street, this option was no longer available due to the Art School taking over the space after the fire in the Mackintosh building.

The RGI show will now be held in the Mitchell Library, which although small, has hosted previous exhibitions.  It will run from 12 to 27 November 2016.

It's great news, as the lack of a major open art exhibition in Glasgow was a glaring ommission in the annual arts calendar, especially as Glasgow no longer has the Art Fair in George Square.   As a leading city for contemporary art, Glasgow needs this exhibition in order to showcase its wealth of talent.

The RGI have also launched a spanking new website today, which looks really rather good - take a look here!
Posted by Judith at 02:12 No comments:

Here's a great talk by Letizia Treves, the Curator of Italian and Spanish Paintings 1600-1800, National Gallery of London.

It's on Caravaggio, and is one of their series of lunchtime talks, and lasts about half an hour.

It's really good, so enjoy!

CARAVAGGIO AT THE NATIONAL GALLERY 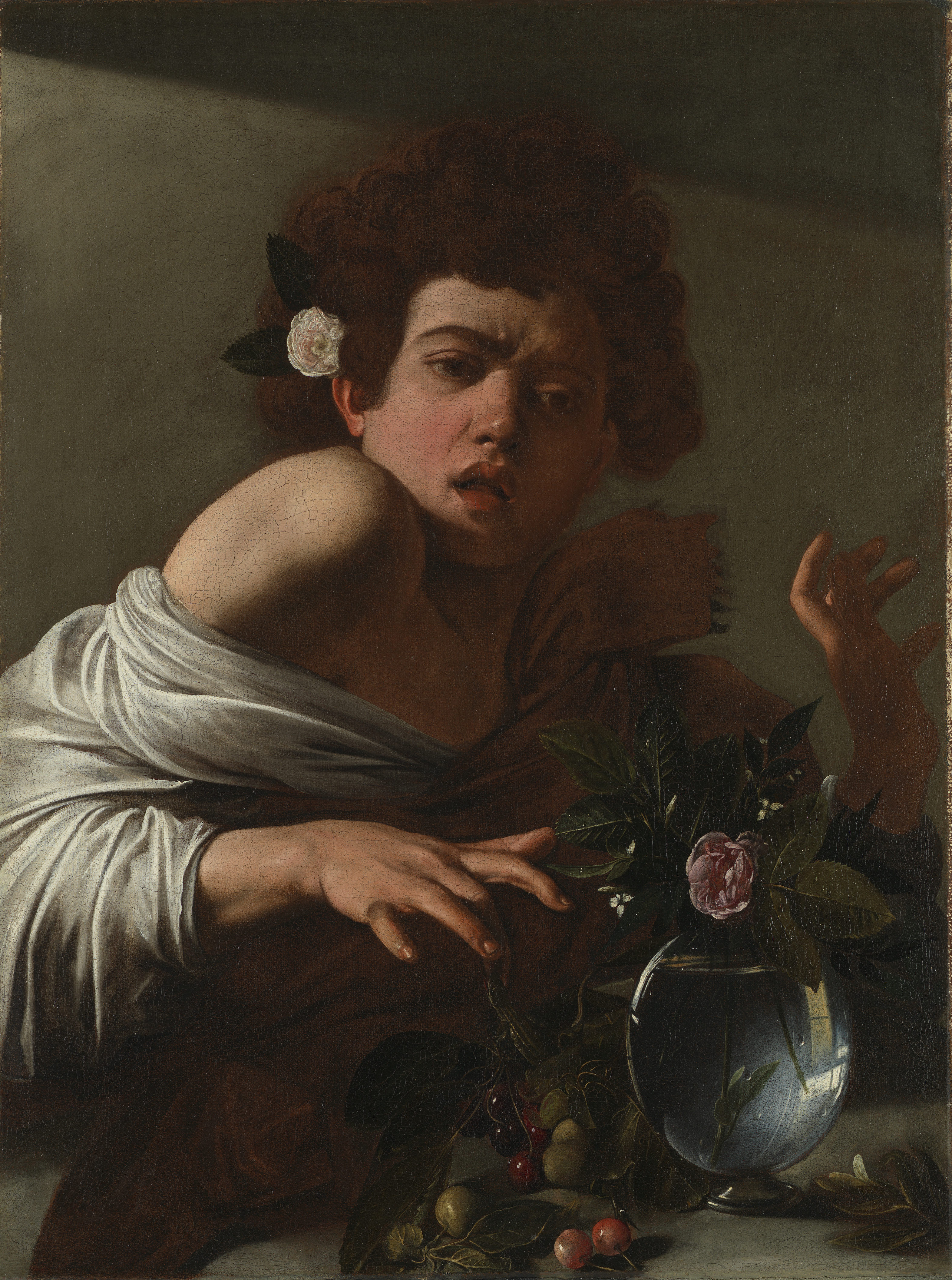 Caravaggio, Salome with the Head of John the Baptist (Oil on canvas, 1607)

Email ThisBlogThis!Share to TwitterShare to FacebookShare to Pinterest
Labels: Boy Bitten by a Lizard, Caravaggio, Caravaggio Supper at Emmaus, Salome with the Head of John the Baptist

Here's some paintings from this week's efforts in the studio, based on my trip to North Berwick the other week. 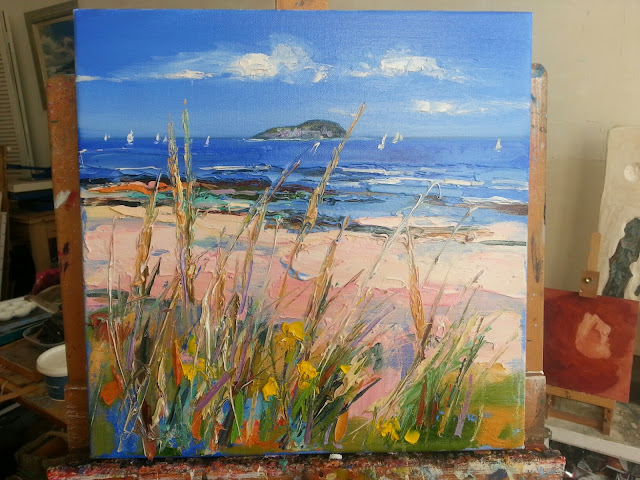 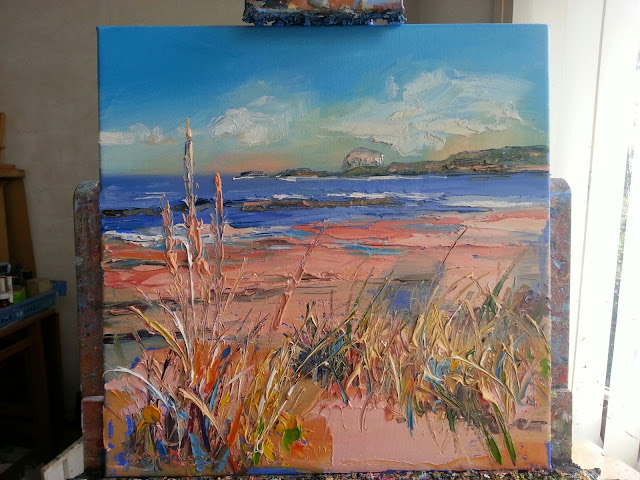 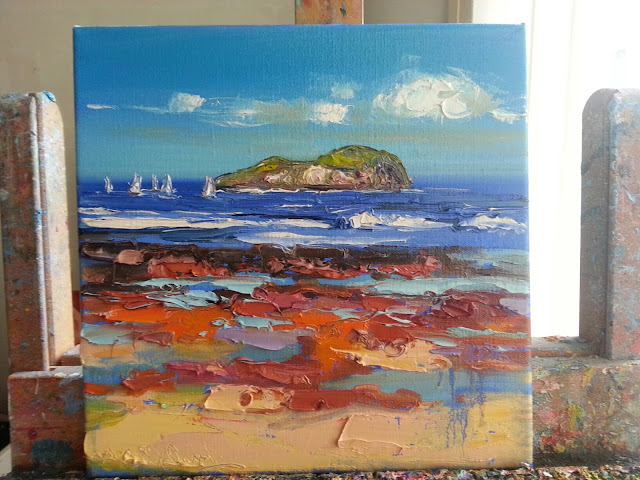