These paintings by artist Lewis Todd are about to go up for auction, and are expected to be sold for around £100,000. 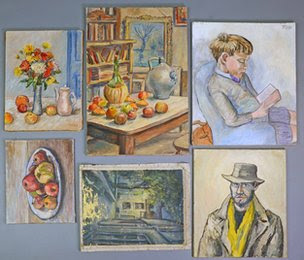 Now you may not have heard of Lewis Todd.  And you may be wondering why his work is worth thousands.

Well, it's not because of the front of his paintings.  It's because of what's on the back. 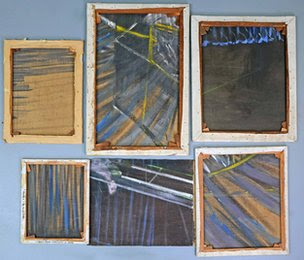 None the wiser? Not seen anything you'd like to hang on your wall?

It's because Lewis Todd's Sunday paintings were painted on the good side of scraps of canvas that was given to him free to practise on.  And on the back are parts of Francis Bacon's Screaming Pope series.


After the Second World War and short of funds, amateur painter Lewis Todd was encouraged to take up painting in oils by John Kesterton, manager of the Heffer Gallery, who gave him his first canvases free because they had only been used on the reverse by Bacon, whom the gallery also supplied with materials.  Bacon liked to paint on the unprimed back side of the canvas, in a conservationists nightmare, but it meant that the front side was perfectly suitable for painting on.

The gifts were conditional upon Todd agreeing to cut up the canvases before making use of them for himself. It is not known how Bacon’s used canvases came to be at the Heffer Gallery in the first place, but Bacon was well know for discarding and mutilating his work.

If you've ever seen the reconstruction of Francis Bacon's studio in the Hugh Lane Gallery in Dublin (as I have), then you can see that he worked in a very chaotic and crowded environment.  So it's no wonder that he discarded canvasses that displeased him.  He probably just wanted them out of his creative space, which was full to bursting.  There were already 100 slashed canvases found in his studio on his death, like this one.

So how valuable is a part of a painting?  Who wants to have only a piece of the whole?  Is the value not in the total image, the complete concept, the entire vision of the artist?  Or is it enough to own just a fragment, like a religious relic?  Is having a few marks on a canvas that has been touched by Bacon enough, rather than the painting itself?  Is it more about the cult of the artist rather than the meaning or aesthetic pleasure of the object?  Or is it merely that even Bacon scraps become a trading commodity?

A whole Bacon Screaming Pope is worth around £5 million.  Five of the Lewis Todd canvases have been authenticated by the Francis Bacon Authentication Committee and will be sold by Surrey auctioneers Ewbank's on 20 March.

Interestingly, Ewbank’s Auctioneers are credited in having established the market for previously unseen and mutilated Francis Bacon canvases. In fact, it's become quite a lucrative market.

In 2007, they sold a collection rescued from a skip outside the artist’s London studio by electrician Mac Robertson, who became Bacon’s drinking partner. Estimated at around £50,000, the collection sold for £1.13 million.
A further six works which were sold by Ewbank’s on behalf of Ron Thomas, a porter at Bacon's dealers, Marlborough Fine Art. One of Mr Thomas’s duties was to ferry paintings between the gallery and Bacon's studio and the mutilated canvases were given to him, either to keep or to have the stretchers for his own use. They sold for a total of £32,000.

In 2008, a man who worked in the shop where Bacon purchased his art materials, consigned part of one of Bacon’s destroyed canvases dating from about 1985.  It showed what appeared to be a “pool of flesh” spread across a black background, and sold for £12,000.

So have a look at the back of paintings.  They could be more valuable than the front.