Here's his 1622 masterpiece from the Borghese Gallery in Rome, The Rape of Proserpina.

Do you know how old he was when he made this?  24.  Twenty blinking four!!  Yes, here's the young whipper-snapper himself, Gian Lorenzo Bernini, in a self-portrait done the year after this statue. 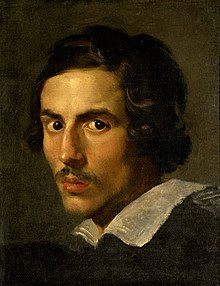 Here's a guy who cranked sculpting up to 11 and added psycholigical tension, drama, reality and theatre into a mind-blowing baroque experience unlike anything that had gone before.  Before, satuary was usually flat in niches, upright saints, two dimensional representations lacking in life and movement.  Bernini lit the fuse and stood well back.

Here's his Ecstacy of Saint Teresa of 1651.  Itr's theatre in the round. 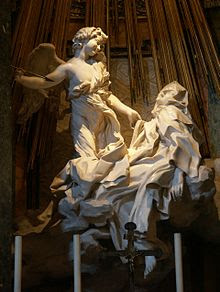 When you go to the Cornaro Chapel, you are faced with a piece of statuary unlike any other religious statue before or probably since.
Saint Teresa writhes about on a convulsing, sensual cloud, her heart about to be pierced by a real golden arrow.  Gold beams shoots down from above, lit by a real light source of coloured light from a small stained glass window above.  Three dimensional painted statues of the Cornaro family strain out from opera boxes at the side to look at the scene, in the same space as you, the viewer are, whilst below, mosaic skeletons dance on the floor on which you stand.
It's a multi-sensory, multi-media overload, as Bernini throws everything he had into the mix - sculpted light, real hidden light, colour, 20 different sorts of marble, gilt, metal, recessive space...and then he messes with your head as to what is real, what is divine, what is the sacred space or the ordinary world, what is sculpted, what is illusion, what is profane, what is heaven or earth, and where does one end and the other begin?  It's mind-bogglingly modern stuff.
In The Rape of Proserpina, the marble has a surface so finely modelled that it looks like real, living skin.  Proserpina even has tears rolling down her cheek..  The ringlets of her hair fly outwards, as if you could run your fingers through them, and the dog's open mouth is hollowed so deeply that it's dark shadows seem to exude dog-breath from deep within it.  It seems to be a huge mass of different weights, textures, and substances in motion, with a living core.  And yet it's all just one piece of marble.

A marble like this is, of course, made by chipping away at a large block.  You have to imagine what is within and then take away material to reveal what is inside, thinking in three dimensions, in the round.

Yesterday's images were life-size models for Bernini's statues of angles, and he made these models from objects such as bundles of hay and sticks, bound to a metal armiture and covered with plaster.  The plaster could be added to, or cut back.This 'adding' technique allows you to build and to feel the inside of a figure, and you can move it about and twist it and change it, seeing the way the light plays on it, the chiaroscuro that it throws up.  It's a very visceral way of sculpting, as you are playing around with the guts of a figure, learning how it works and letting it dictate to you how it can become its own object.

Once you've understood the model, then you look for the piece of marble within which that figure lies, and the process then starts of releasing it.  No room for mistakes....
Posted by Judith at 11:28