They played on Thursday and Friday at the Usher Hall in Edinburgh, the first time that they have visited Scotland since 1874.  Or thereabouts. 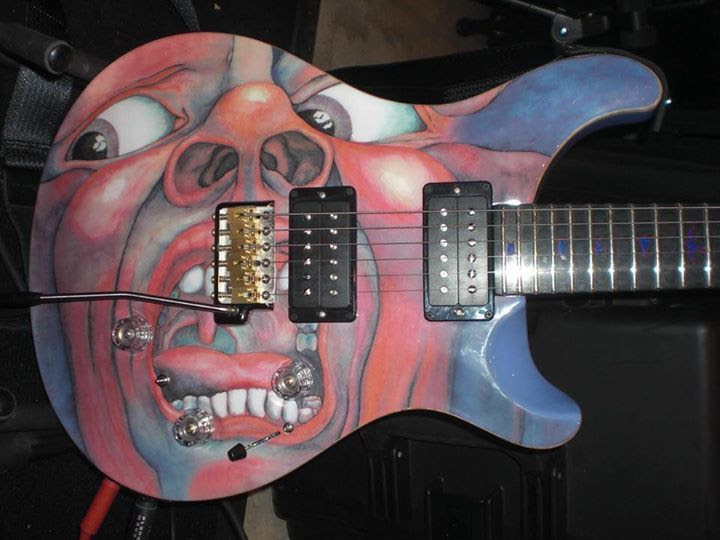 Apparently it has the Moon Man on the back, as per the gatefold of the album In the Court of the Crimson King.  But I only saw the front.

Here he is playing it.

So - three drummers.
A squeaky panda and a nutcracker.
A million billion gazillion notes, all in the right order, with precision timing (except for one wrong note by Robert Fripp on Thursday).
A bunch of extremely flexible guys on Friday, throwing some seriously impressive curves at the front to disco floor-filler 21st Century Schizoid Man, along with an enthusiastic old timer in his 70s in Highland Dress, kicking up his kilt.
And a fight.

I can't point you to any video footage of any of this, because the band don't allow recording at the concerts.  So it now only exists in our memories.  And what memories they are.

However, I can offer you a strangely psychadelic little 1974 film of Starless, a song which they played at the Usher Hall.

This vintage video HERE (with a different line up and only one drum kit, played by precocious teenager Bill Bruford) gives you a sense of the reigned-in exactness within the ultra-strict structure and the extreme preciseness of the music.  It shows how the band manages to be both very static and completely dynamic, full of reigned-in tension and energy, and how it manages to be creative and expressive within that framework.  Everything and everyone is in its place (literally and metaphorically), and no one part or person is allowed to occlude the others.

Interestingly, the achingly pared-down guitar solo which Robert Fripp starts playing from 4.18 was, at the Usher Hall gigs, started off by Jakszyk, and then absolutely seemlessly passed over to be played by Fripp.  You had to watch very very carefully to see them do it.  And each of the three drummers is playing an entirely different rhythmic line.