Here's another of the images of spring fields in Fife.

Sometimes when you note-take with the camera, the photos don't turn out as you expect, and you can get a whole succession of images that just don't work.

Other times, you can be pleasantly surprised by the way that the elements have all lined up, and an image jumps back out at you when you review the photos you've taken. 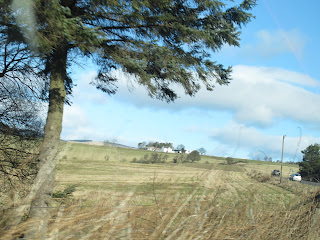 The most obvious difference perhaps is that the photo is rectangular, and the painting is square.  A square format makes a landscape composition more dynamic, and a lot of Scottish painters seem to use square canvasses.

Although I was trying to closely follow the photo, as well as put in what I'd visually noted from the scene, you can see that there's a lot less sky in the painting than the photo.  There's more middle ground, which is tipped up.  I suppose that's because the thing which caught my eye on the day as being interesting about the landscape was the pattern of the fields.  That pattern-making now takes up two thirds of the painting.  I also liked the soft quality of the light and the really subtle secondary and tertiary colours.

However, I put some sharp orange at the bottom as a little colour-pop in an otherwise subtle (for me!) painting.  It compliments the bright blue of the sky at the top and brings the foreground forward in the picture plane.

The organically-shaped tree growing on the left is contrasted by the straight and functional telegraph pole on the right, and reading from one to the other then leads your eye into the painting with the farmhouse on the crest of the hill of land.

It's going to be on show in London with Duncan Miller Fine Arts at the 20/21st British Art Fair in September.
Posted by Judith at 09:23