Favourite Paintings - Van Gogh's 'Crab on its Back'

Here's a painting that I really love, and try to see at the Van Gogh Museum in Amsterdam whenever I'm there (it's not always on display).  It's Vincent van Gogh's Crab on its Back, painted the year before he died. 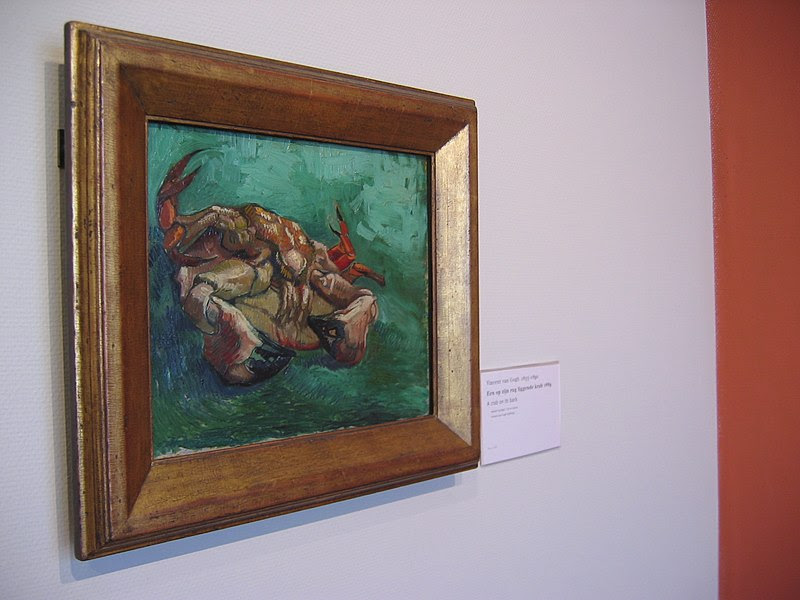 ..and is of a very ordinary subject.  Van Gogh had a real burning need to paint, and did so pretty much every day.  You get the feeling that perhaps the weather was too bad outside to go out to paint on this particular day, so he grabbed the first thing that came to hand indoors and set to work on it.  Perhaps it was his dinner...

Have a look at the picture.  How would you choose to paint a crab?

He's put it on its back, off-centre, tipped up towards the light, at an awkward uneasy angle that gives a feeling of struggle.  He's deliberately put something under the shell at the back to tip it up so that it looks like that.  The sense of movement and struggle is further echoed by the surrounding brushstrokes.

It has a background of sea green, which acts as a complimentary to the orangey red of the legs.  The brushstrokes are bold and obvious in the background, painted fast and with urgency using a flat brush about 3/4" wide.  The crab itself has been painted with a narrower round brush, and in the area of the ends of the legs it almost looks like a watercolour brush has been used, the lines are so fine.

So there are lots of contrasts going on - the large crab claws at the front have a real volume and strength to them, while the small legs at the back look spindly and frail.  The painting has contrasts of complimentary colours playing off each other, areas of luscious thick paint then passages of great delicacy, and the taking of a humble, everyday object that has been elevated to something monumental, made the entire subject of a painting - just like the  peasants that Van Gogh drew so often in his early years.

But there's more than that.  It's a crab on its back.  Something with a hard shell that's revealing its soft, vulnerable underside.  He's using the crab to say something about himself and his own feelings and siutation.

Have a look at this.

Eugene Delacroix, Christ on the Sea of Galilee (Oil, 1853)

This is Delacroix's painting Christ on the Sea of Galilee, painted the year that Van Gogh was born.  Van Gogh knew and admired this painting, mentioning it in his letters.  He admired Delacroix' "symbolic language through colour alone".

Delacroix was an artist who knew a thing or two about colour, and wasn't afraid to use complimentaries as major themes in his work.  Have a look at that viridian green colour of the turbulent water and the orangey-red colour of the boat and the figures with their flailing arms.  Remind you of anything?

Delacroix's painting is about the vulnarability of a small shell of a boat on dangerous waters as Christ, the fisher of men,  sows the seeds of faith.  The image of a sower and reaper was very important to Van Gogh, who had of course initially been a preacher himself.

So the crab painting works on different levels of meaning - it's something low, common and ordinary, just a picture of a humble crab; but it's also something extraordinary, with a spiritual element to it.  It's vulnerable and fragile, but also enduring - something which will smell and decay tomorrow, but yet remains enduring and potent as a painting well over a century later.

It's a very, very beautiful painting, so if you ever get the chance to see it, please do.

(You can even order wools from a website that dyes them to match the colours of this particular painting - really! - which is very interesting, because Van Gogh used to have a box of wools, and used to spend time winding the different coloured strands together to see how they combined and the colours interacted with each other.

These are the wools to match Crab on its Back from website The Spun Monkey. I'm not sure what you're meant to do with them once you get them - knit your own masterpiece maybe!)
Posted by Judith at 05:08

Email ThisBlogThis!Share to TwitterShare to FacebookShare to Pinterest
Labels: Christ on the Sea of Galilee, Crab on its Back, Eugene Delacroix, Vincent van Gogh