Whilst in London, I went along to the National Gallery to see the exhibition Saints Alive by Michael Landy.  Going during the evening on a Friday meant that there were no queues for the Sunley Room, as although the exhibition is free, numbers into the room are limited.


Landy (seen above with the kinetic super-sized saints sculptures) is the chap who created Art Bin, inviting people to come and throw their unsuccessful pieces of art into a giant skip.  And then he was also the guy who, back in 2001, sat in the window of C&A in Oxford Street, catalogued all his possessions from his car to his birth certificate, and then systematically destroyed the lot in a performance piece called Break Down.  You do have to wonder how he gets along these days without his bank cards or driving licence.

Anyway, now he has is the eighth Rootstein Hopkins Asociate Artist, which means he gets a studio at the National Gallery and total access to the collection.  The only stipulation is that the resulting exhibition must refer to the collection, and inform and reinvigorate gallery visitors to that collection.

Landy set about drawing and collaging from the paintings that caught his imagination in the collection.  After a while, he was drawn to the many paintings of Saints, with their bizarre stories of self-punishment and denial, strange attributes, and plethora of creatively violent martyrdoms. He then handed over to model-making company MDM, who constructed huge kinetic sculptures of fibreglass and retro mechanical parts, overseen by Landy.

Here's Saint Apollonia, who greets you at the entrance to the exhibition. 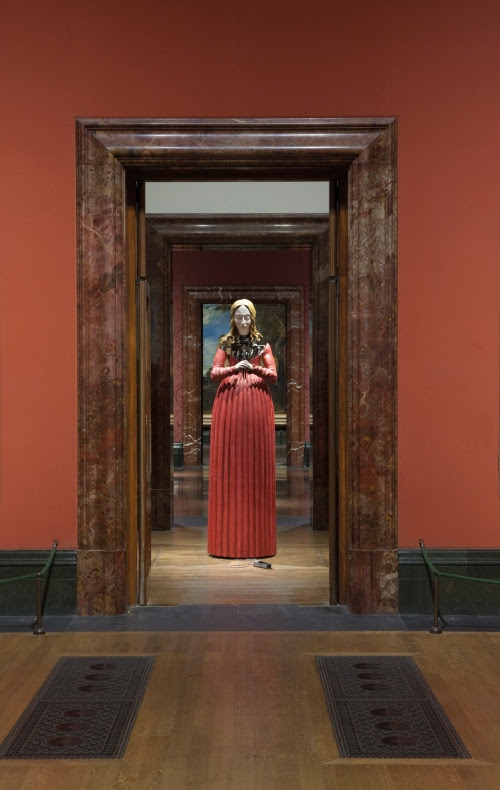 
She's a big girl, and if you stand on a hydraulic footpedal, she smashes a set of pliers into her face with both hands, and wrenches out a tooth with a loud crash.  WHACK...YANK!

Here's Saint Francis of Assissi, famed for his life of poverty and self-denial. 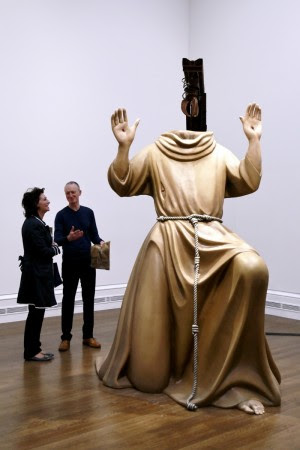 St Francis is the guy who lived a life free of material objects, although he didn't shred everything in the window of C&A.  Now, I believe that a large grabbing claw, like those machines you get at the funfair, is meant to come along, reach down and grab something out of the neck of St Francis.  But St Francis wasn't working when I visited.  In fact, quite a few saints had broken down.  But in a way that was ok.  Mechanical breakdown.  Mental break down.  Break Down indeed.

Here's one that hadn't broken down - it's  Saint Thomas, whose disembodied finger jab-jab-jabs at the body of Christ, battering holes in the fibreglass.

The body of Christ flails around violently on its spring, and people jump.  No wonder the gallery staff have earplugs.  It's noisy stuff.

It's also pretty violent stuff, in a cartoon way.  Saint Jerome repeatedly batters himself with a rock to stop himself from having impure thoughts.  Saint Peter Martyr has an axe in his head.  Saint Lawrence has a large griddle that he was roasted alive on, and Saint Lucy's eyes whirl on a plate.  The flailing, crashing, battering, self-flagellating saints come across as a pretty weird bunch.  What was with all their obsessive self-destruction?  What kind of peculiar mind-set did they have? 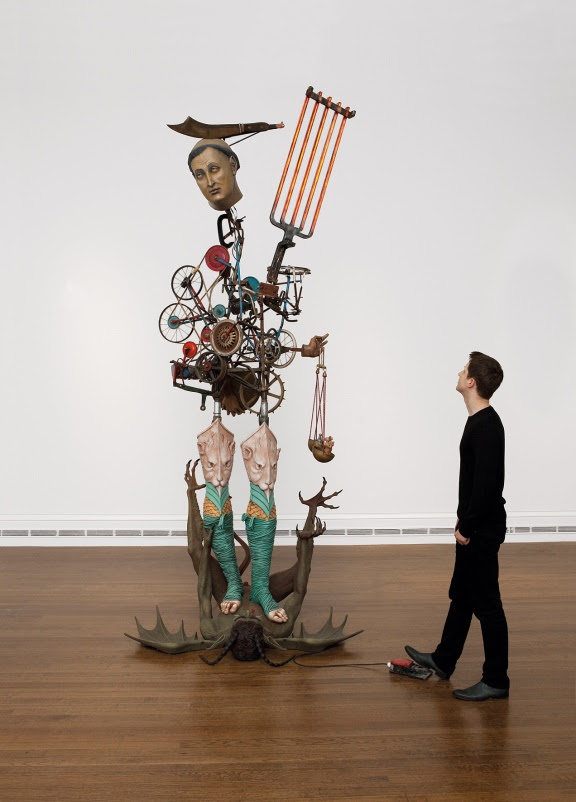 These are figures are built from many parts.  They are constructed from fragments of a variety of different paintings in the gallery, and are also built out of old defunct mechanical parts.  They are therefore all about Landy's obsession with destruction and fragmentation, about the things that you need, the things you can do without, the things that are defunct and no longer relevant in your life.

So the question here is - are saints relevant?  Their myths are constructed from different parts, as their physical bodies are here.  Once revered, their stories known by everybody, these saints are literally no longer the figures they once were. Saint Catherine has even been chucked out of the saints calendar for not actually existing.  The minx!

Landy comes over as a genial kind of guy, but equally he's obviously not the sort of guy who shies away from the big statement or the big gesture.  These are sculptures that are fun and interactive (when they work) but are also ones that pose questions.