Paul Nash at the Tate

The wonderful Paul Nash exhibition at the Tate Britain in London is currently on at the moment, and is a great introduction to the work of this very English and rather mystical artist.

This is an exhibition which takes you through the lyrical, Georgic drawings of his early years (during which his home life involved his mother dying in a mental institution in 1910), and his repetative, comfort drawings of a family group of trees.

Paul Nash fought in the First World War, later acting as a War Artist.  Here he is in uniform in 1918.

However, whilst he was invalided out after a fall in the trenches, his entire battalion of the Artists Rifles were killed. Not surprisingly, this affected him very much mentally (causing a breakdown in 1921).  His huge, stunning canvas The Menin Road, is in the exhibition, and its stark, barren vision is immensely striking.

After the war, in 1921, the year of his mental breakdown, he became fixated with the geometry of the landscape.  He painted nature by means of Cezanne's  cylinder, sphere and cone,the cube which he saw naturally appearing in the landscape in the form of giant anti-tank blocks of concrete or man-made groynes. 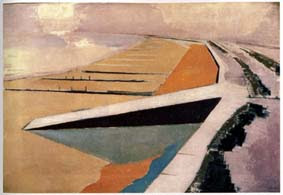 His most famous work is perhaps a Second World War picture,  Totes Meer, an eerie painting which looks like an abstract  sea of metal waves in the landscape.

In fact, as this film and a series of photographs that he took show, Nash was merely painting what he saw, namely a dump of wrecked second world war enemy aircraft near Cowley in Oxfordshire.

This is perhaps the key to Nash's work - his paintings often look surreal, but in fact they are super-real, they are super-observed.  His chalky, strange, very English landscapes remind me of work by Eric Ravilious, Edward Bawden and Eric Gill.  They are ordered and ancient and pastoral, and yet there is something tortured writhing beneath the surface.

The last room sadly doesn't have The Battle of Britain, which I'd hoped to see

but it does have a strange sense of floating and flying in the paintings very much like the final room of the recent Georgia O'Keeffe exhibition at the Tate Modern, where she painted abstract scenes of clouds observed from above.  It's almost like a precursor of death.

In this room are some of Nash's last series of sunflower paintings (a flower symbolic of life and death), which return to his love of William Blake, being based on his 1794 poem Ah! Sun-flower.

Paul Nash, The Eclipse of the Sunflower (Oil on canvas 1945)

Nash died of heart failure in 1946, and is buried with this stone carving of a hawk on his grave, which he has painted 10 years earlier.

Paul Nash, Landscape from a Dream (Oil on canvas 1936)

Now, as much as I loved the show, there is an annoying thing with moderncurators.  The exhibition is often about curating and the curators more than it is about the artists.

So here, the agenda is not to introduce Nash to an audience who haven't seen his work, or to showcase him as a war artist, but to present Nash as an 'international modernist painter'.  Which means they dispense with any sort of introduction to the man, as if the paintings spontaneously appear on their own, and that the life of an artist doesn't reflect in and inform the work.

So, no need to give us a picture of the man, or tell about when he was born, or how he was brought up, or his family, or his mother's illness, or his own mental breakdown, or his lack of personal relationships.  Nope. 'Paul Nash was a key figure in debates about British art's relationship to international modernism' we are told.  What a load of alientating elitist nonsense.

Which begs the question, just who is this show aimed at?

People who never been to an art show before?
People with an interest in art who just want to see something interesting and a bit challenging for an afternoon?
People who have never seen the work of Paul Nash?
People who perhaps know one aspect of his work, but want to learn more about him?
Experts who are so up on Paul Nash that they would be insulted if you even hinted at any biographical insights?
Other curators?

I suspect it's the latter.

So do go to the show - but to get the best out of it, read up on Paul Nash's life and times beforehand.