The Price of Art

Claude Monet's Nympheas, one of his waterlily paintings done during his final years at his house in Giverny, has sold in New York for $43.7 million.

That's £27 million.  Think what you could buy for that amount of money.  Or...you could buy a single painting... 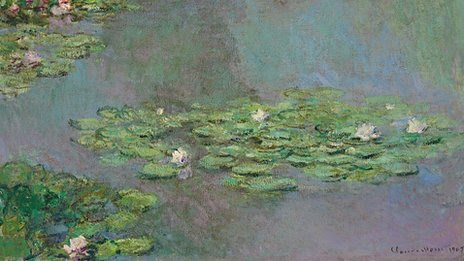 Sit and admire it?
Put it in the bank?
Lend it to a museum?
Resell it?

The art market is a very complicated thing.  Art is largely thought of as something completely aesthetic, done for the higher good, without vulgar worldly concerns of value.  The artist starving in a garret.  However, art is also a commodity, like gold, to be traded in by other parties.  It can be an investment, but an investment that you can appreciate aesthetically as it (hopefully) appreciates in value (although there is a skill to timing re-exposure to the market).

But unlike gold, it is an asset that comes with responsibilities.  A really famous work of art is an object within an art historical context, without which the story is incomplete, and so needs to be accessed by both scholars and the public.  It is also subject to natural deterioration, so requires proper display conditions and conservation.

Or if you own something - do those considerations go out of the window?  Is the new owner of Nympheas entitled to just chop it up into little bits if they like? It's just an object, and they own it.

When art is so subjective, and even the definition of art is indistinct, who says why one painting is more valuable than another?  What makes Monet's painting worth £27 million?  It's just paint arranged on canvas.

Of course, it's down to market forces, supply and demand, rarity.  Crucially, it is paint arranged on canvas by the hand of Monet, with the rationale of a genius behind it.  Also, Monet is dead, and being dead is a great career move for an artist.  It means that supply is finite, that each work can then be placed within the story arc of a career, and each work is therefore more precious, more resonant because you can see its part in the whole.

But does having a huge value make the art work better?  Is the best painting in the world the most expensive?

Of course not.  Only a tiny percentage of paintings are exposed to the world markets in such circumstances, so the relative values of art can't be assessed and put on a sliding scale of monetary worth.  You couldn't chip off the Sistine Chapel frescoes and put them on the market.

Art is what resonates with you.  It's what you connect with, what speaks to you.  Often that's not something you can define, but very often it's something that's beyond price.