James McAvoy as Macbeth at the Trafalgar Studios

While I was down in London, I took the opportunity to see the new uber-groovy, ultra-gritty production of Macbeth at the newly made-over Trafalgar Studios. 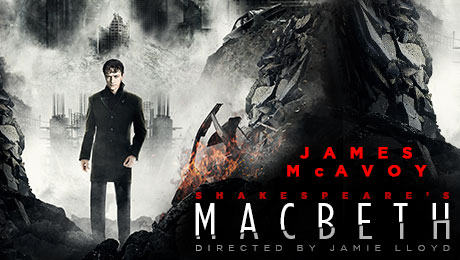 (I don't know why he's wearing that outfit in the poster - he certainly doesn't look like that in the play.)

Now, I didn't think it would be possible to get too close to James McAvoy, but as I found out, it very nearly is.

The Trafalgar Studios turns out to be a very interesting theatre space, with two banks of seating opposite each other; the studio seats and the stage seats.

Here's the view from the stage seats across the stage to the bank of studio seats. 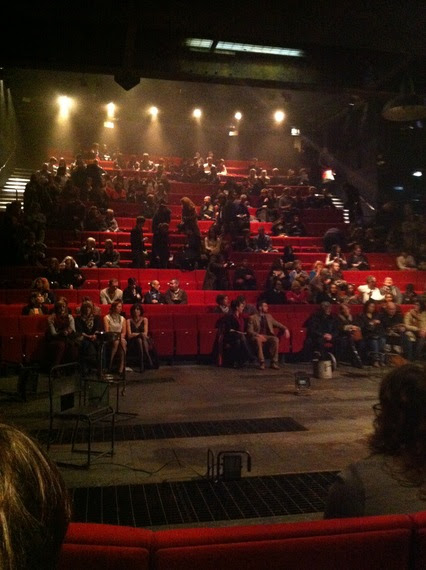 As the name implies (although I was unaware when I purchased the ticket) the stage seats where I was are somewhat interactive, as they form part of the stage.  But more of that later...

The set is very bare and industrial as you can see, looking like something Orwellian and Animal Farm, or Churchill's underground Cabinet War Rooms, but all very much part of some sort of post-apocalytic event.  Furniture is utilitarian, and there are trapdoors and grills in the floor (drainage is required - all becomes clear later).

It reminds me of the sort of unconventional spaces used for theatre in Glasgow in the late 1980s which involved large epic sweeping theatrescapes and interactive promenade audiences, such as The Tramway's Border Warfare or The Gododdin (which involved 50 pine trees, 600 tons of sand, a dozen wrecked cars, and  200,000 gallons of water sloshing about turning into mud, splattering the dumb-struck audience).

So as I took my seat at the front at the aisle of the stage seats, it was clear that the stage was set for a very dystopian vision of Scotland.  In fact, according to a quick read of the programme, the play is set 50 years in the future, but it's a future where it's very much a Darwinian survival of the fittest, where the natural order of things has been turned on its head. 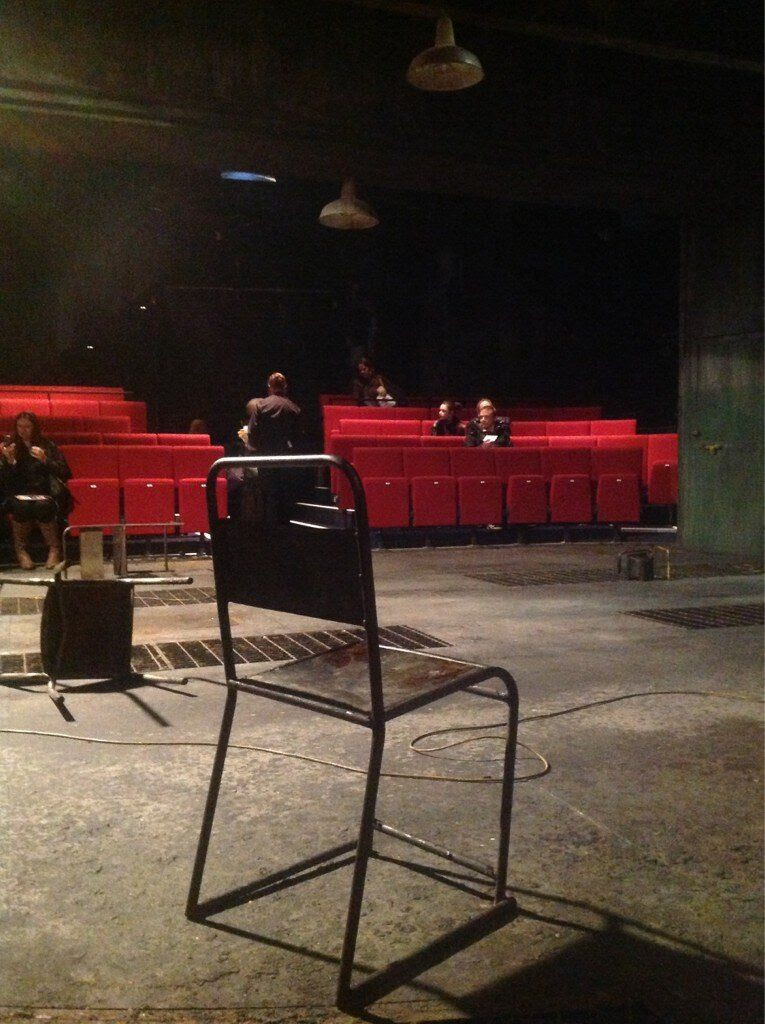 I've seen staging of Macbeth where various trendy interpretations have been shoe-horned on in order to grind some particular axe without actually illuminating the meaning of the text - the most traumatic I can think of was a bizarre zombie production years ago at the Citizen's Theatre in Glasgow, where the lines were just thrown away in flat monotones.  But this Trafalgar studios production turns out to be one where the dystopian vision actually makes the play come to life and makes you go "Of course!  So that's what's happening - that's what it's all about!"  And any production that manages to that with a 400 year old play has to be pretty cool.

So - the lights go down - and suddenly there's a rush of actors pushing past me down the aisle.  Literally past me - fighting, shouting, brandishing axes and swords, covered in blood - sticky, shiny blood.

You actually feel as if you're going to get poked in the eye with a weapon - they're that close.  These guys give the impression they aren't mucking about, and wouldn't care if they did give you a wee chib on the way past. 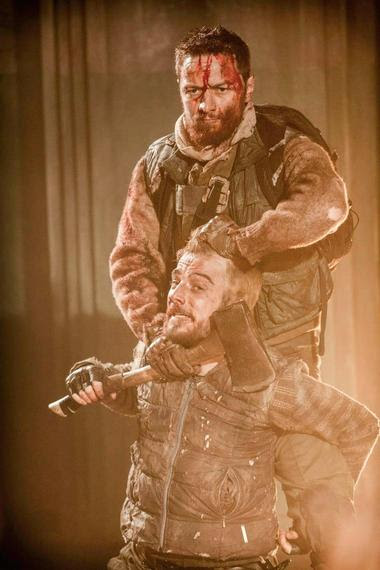 
This is a kill or be killed world, where everyone wears extremely practical footwear, and - HALLELULAH! - they speak normally.  In Scottish accents (some rather less indigenous than others though, it has to be said).  Yes, they make the text sound normal, as if it's just coming out of their mouths because they've just thought it, in Scotland, in normal accents.  You wouldn't think that would be such a radical detail now, would you, for the Scottish play?  But somehow, it is.  And all the better for it. 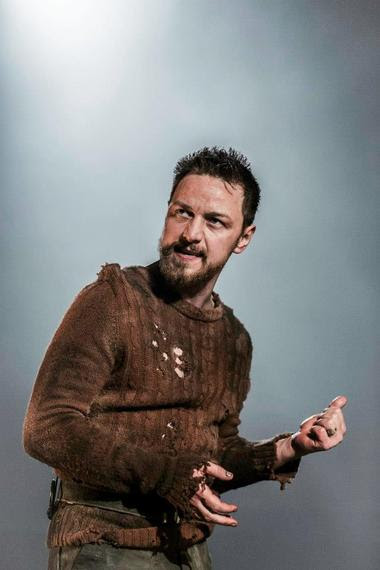 McAvoy, and Claire Foy as Lady Macbeth, are a very young couple, but in this world, that makes perfect sense - it's so dog-eat-dog that only a few live to old age.  Described at the end of the play as a 'butcher and his fiend-like queen', at the beginning they are sexually charasmatic and totally believable as the strong married unit who have lost a child and are trying the survive in a world with a very uncertain future.  Foy look so young that she is both steely and vulnerable. 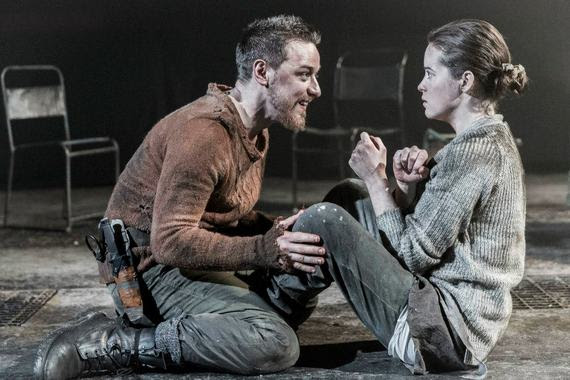 It's a very visceral world, where life and death is a taste in your mouth.  During the scene at the end of Act 1, Lady Macbeth is telling her husband to further himself by killing the saintly King who is staying in their castle.  She knows what it is like to give birth, but she is also prepared to kill.  Her husband puts his hand on her stomach, and there is silence for a moment.  She looks pensive.  'Bring forth men children only', he says.

It had never really struck me before that Macbeth is a play about a man coming up against his own genetic buffers.  He has no children, no male heirs - it's the end of the line.  So killing the king in order to become king will not profit him in the long term, as he has no-one to inherit.  He had a child, but it is dead, and that is the crux of the play.

The whole of this violently inverted world, where horses eat each other and parents outlive their children, is about a universe turned on its head, for as the Witches say in the first few lines of the play, "Fair is foul and foul is fair".  What is there left of worth when you cannot send something of the essence of yourself into the future?

No wonder the most central speech of the play is about that very thing.  "Tomorrow.  And tomorrow.  And tomorrow."  says McAvoy slowly in measured voice, swinging back on a chair at a perilous and uneasy angle, "Creeps in this petty pace from day to day to the last syllable of recorded time; and all our yesterdays have lighted fools the way to dusty death." 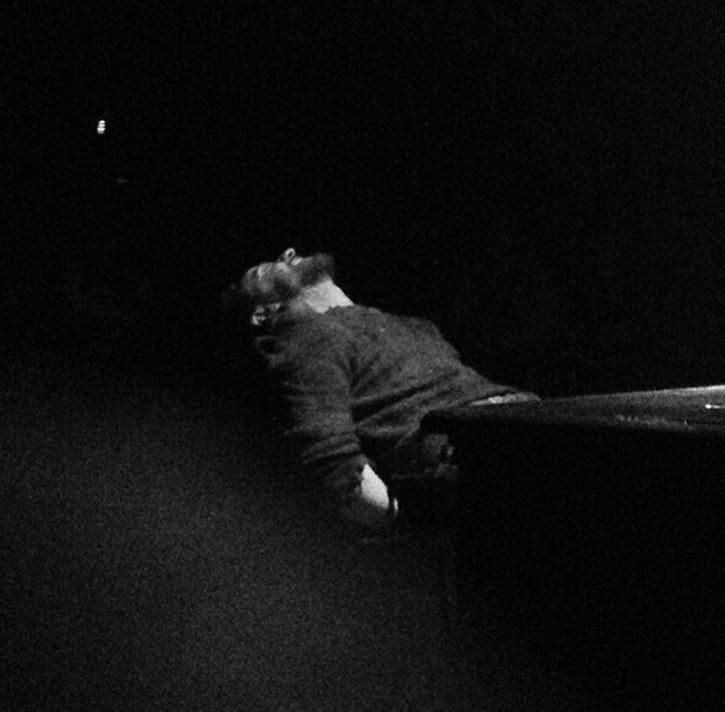 This is a man who smiles when he takes that very future away from Macduff, when he kills Macduff's wife and children.

In fact, McAvoy the actor is utterly hyped up throughout this incredibly physical play, living the anger and the raw animalistic energy of the character.  He slides down ladders, he vomits, spews, roars and slavers, splattering a wide range of effluvia across the stage.  When he storms past you, grabbing the back of your seat, you can hear him swearing to himself under his breath, in a blizzard of fruity Anglo-Saxon.  Standing right next to me (and I mean an inch away), you could see the veins in his throat throb, his bitten-right-down fingernails, and the little freckle on the back of his neck.  It's right up against the fourth wall.

In the banqueting scene where Macbeth sees Banquo's ghost, Macbeth and Lady Macbeth are putting on a polite face to their guests, laughing amidst the chaos.  But McAvoy has in fact tightly grabbed and gripped a handful of hair at the back of Lady Macbeth's head in a rough, bullying gesture which you can only see from the stage seats.

It's a small gesture, but suggests that their relationship has gone from loving equal unified partnership to resentful domestic violence, with one pitted against the other, wife unnaturally against husband, like the horses who eat each other in the stable  Perhaps he's thinking that the real way to advancement would have been not to kill the king, but to kill her, and to marry someone who really could give him the heirs and the future he desires.

I think it's at this point that a large cascade of blood comes down from the ceiling onto the table, and splatters all over the first couple of rows.  It's quite a shock.  No wonder a woman further along (who'd obviously been before) was wearing a dinky pair of Vivienne Westwood shorty wellingtons.  No-one had told another woman who was wearing a suede coat, and she was distinctly un-chuffed, even when the usher to whom she complained in the interval assured her the 'blood' was water-soluble.  "It's an interactive theatre experience", he told her.  A bit late when you've been sploshed with blood, splattered with sputum and sprayed with cold water, and your coat is dry clean only. 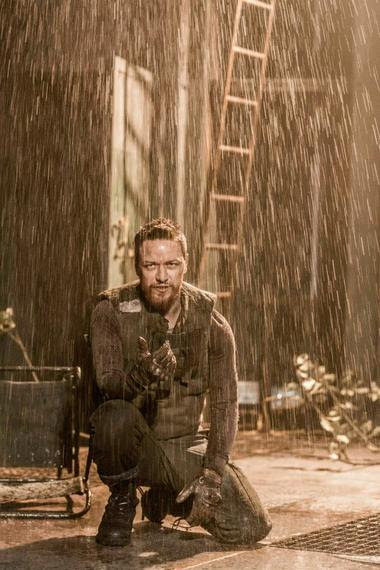 It's a play steeped in blood.  In another key speech of the play (and the one that has to be my favourite in the whole of Shakespeare), Macbeth talks of how his blood-covered hand will "the multitudinous seas incarnadine, making the green one red."  It's beautiful word-play - how lovely a word is incarnadine? - where the rolling wave-like polysyllables play up against the monosyllables, imagining another universal inversion where the all the green seas of the whole world are turned to their opposite colour, red.

Blood links birth and death.  Lady Macbeth, the childless woman who has given birth, goes back to the murder scene of Duncan to push the daggers into the king's body further to spread the blood about and incriminate the grooms.  It's a strange, unnatural intimacy.  By the end, blood covers the stage in a great pool.

The final inversion in the play is that Macbeth, thinking he has nothing to fear from anyone born of a woman, finds that his nemesis Macduff did not have a natural birth ('of no woman born' - a Caesarian).  Again, birth contains death - Macduff's birth caused his mother's death, and the manner of his birth signifies Macbeth's death.

Realising that the game is up, Macbeth succumbs to his fate.  McAvoy plays it as an act of bravery, not cowardice, for Macbeth to invite in his fate and welcome death from Macduff.  The next time we see him, his head has been hacked off.  It's brutal.

The dystopian world of this production of Macbeth is one which gives context to Macbeth's crime, this level of tactile, visceral, bloody violence.  For a four centuries old play about witches, kings and magic, it is made terribly real and relevant.  It's actually about the human condition, about the very human fear of facing the future.  And the play is so physically immersive, you feel as if you're living it.  By the end, I was covered in blood, feathers, and some of Birnam wood.

So go along - it's brilliant.  Get a stage seat at the aisle if you can.  And wear old clothes.

For more info about the play and how to book tickets (if there's any left), go here.
Posted by Judith at 09:19