Margaret Thatcher: An Inspiration to Artists?

Well, gosh, I'll leave that to you to decide - but according to those lovely living sculptures Gilbert and George in this BBC ARTICLE, it's a big 'yes'. 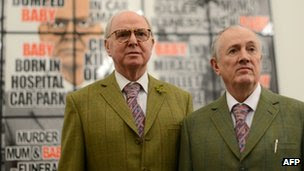 "We admire Margaret Thatcher greatly." says George (above left), "She did a lot for art. Socialism wants everyone to be equal. We want to be different."

And by golly, George and Gilbert are certainly that. 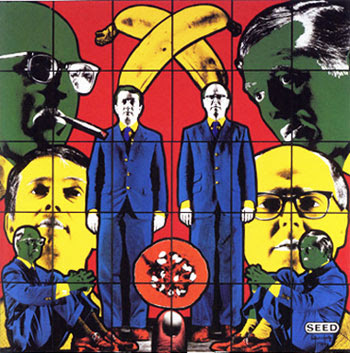 They have their clothes on in this one.

My favourite soundbite from the Ant and Dec of art was during the BBC documentary Imagine, when Gilbert was talking about how their neighbour Tracey Emin was always pushing invites to the previews of her shows through their front door in Spitalfields. "Luckily, ve haff a goot shrredder." said Gilbert, drily.  (He's actually Italian, but I'm very bad on accents.)

Anyway, I'll leave you to read the BBC article on Mrs T as the grit to the cultural oyster and leave you to make up your own mind.
Posted by Judith at 02:51