The High Art of the Low Countries

Regular readers of this blog will be aware that if there was a television series that consisted of Andrew Graham Dixon reading the back of a cereal packet to camera, I would be eagerly watching every minute of it.

So, given my fondness for Dutch art,  it was with great excitement that I tuned in to the three part series The High Art of the Low Countries on BBC4 with Mr AGD.

In these programmes, Andrew Graham Dixon tours the Low Countries, exploring how history has influenced the area's art, architecture and culture.


In the second programme, I was thrilled that AGD visited the Jan Six house in Amsterdam, and discussed the wonderful portrait by Rembrandt of his friend, the first Jan Six.

I was lucky enough to see this painting in a visit through my University in 1983 (the house is normally closed to the public), which I wrote about in my blog here.  I was very struck by the gesture of Jan Six's hand being thrust into his glove, as if caught in the moment before turning to leave, and rendered in quick, impressionistic darts of paint which said everything about the personality of the sitter and captured the immediacy of the momentary act. 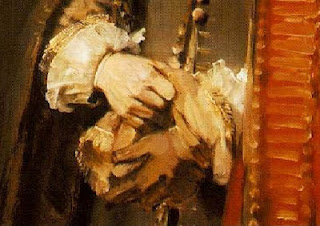 Moving from the Golden Age of Rembrandt to the modern age, the general thrust of the third programme was that following a brief period of decline, the entrepreneurial and industrious region of the Low Countries rose again to become a cultural leader in the modern age. Despite its small and almost insignificant size it produced important forward-thinking artists like Van Gogh, Mondrian, Magritte and Delvaux, who changed the face of art forever.

Vincent Van Gogh was originally a missionary in Belgium before he found his true religious vocation as a painter.  Nature was at the centre of this new faith, exemplified by his early painting The Potato Eaters, which he considered to be 'one of the best things I have done' throughout his life.

With its dark brown potatoey colours, and almost characatured, potatoey faces of the sitters, never has paint more accurately summed up a life of earthy toil. 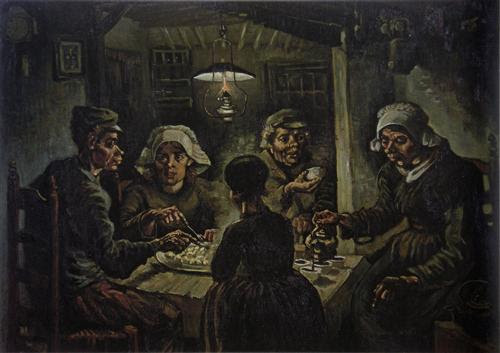 Van Gogh was 'forging a new religion for the common man with images of divine beauty'.  In his paintings of sunflowers he was painting, according to AGD, his sense of himself (he signed the vase with his Christian name).  The whole cycle of life and death, with the buds of the flowers, the full-blown sunflowers and the dying seed head containing the new life, is all in one painting. 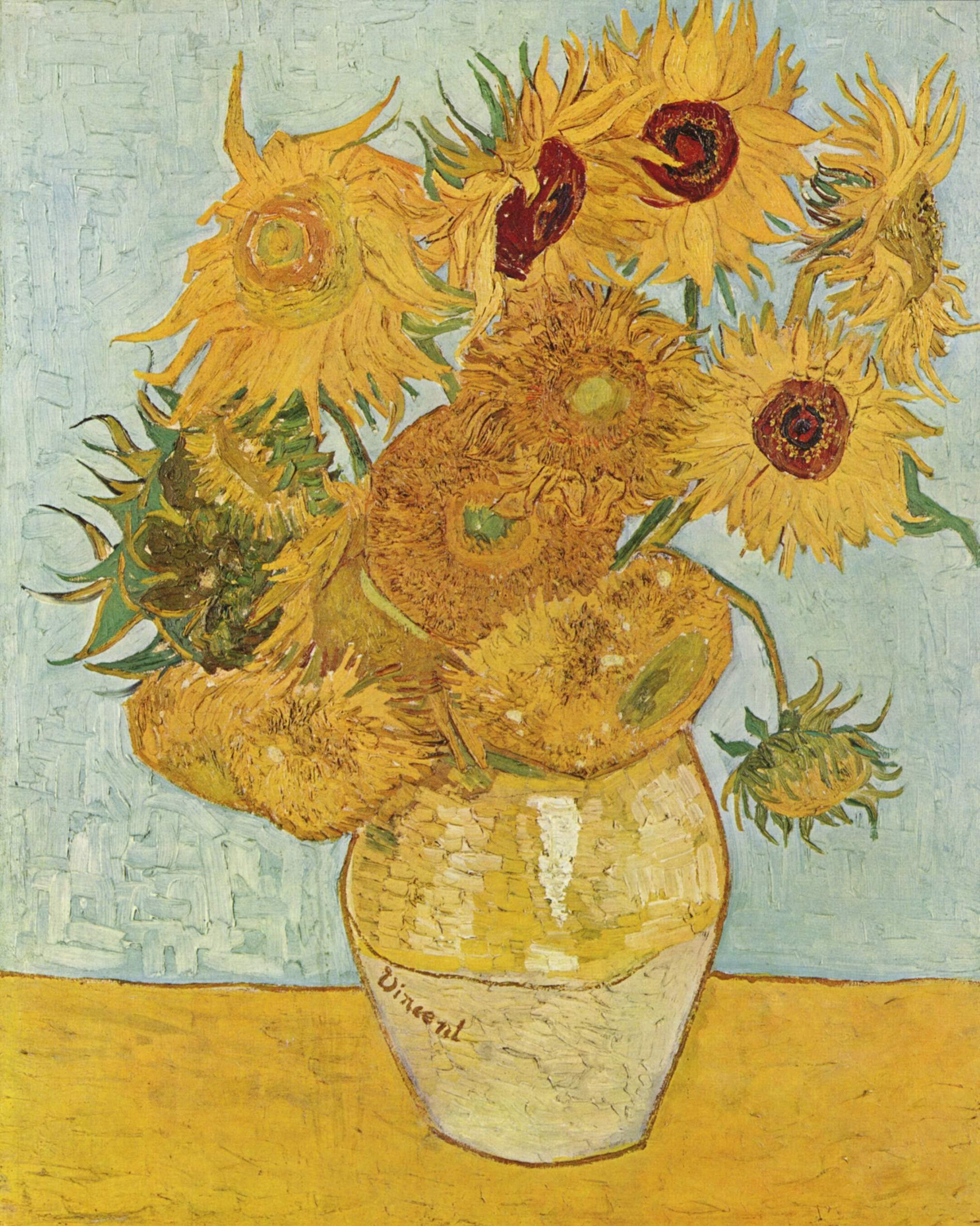 Van Gogh spoke of the paint itself in very sensual terms, using food metaphors like that of the garlicky mayonnaise that is common in Holland.  (In fact, he apparently did, in some less lucid moments, actually eat his paint, never a good thing considering the poisons that it contained, such as arsenic and heavy metals.)

There is a feeling in the sunflower paintings (as there is also in Joan Eardley's late work) of a great sense of urgency, that there is but a brief time in which to create - indeed, two years after he painted the sunflowers, Van Gogh was dead, aged 37.

But the crux of the meaning of the sunflowers is that they are used as a metaphor for self, that nature is a conduit by which you can communicate something about what it is to be human.  And in Van Gogh's case, something which is fragile, mutable and passing, something which, like food itself, can be consumed.  Perhaps Vincent himself felt eaten up and consumed by the weight of his mission of serving as a conduit between nature and art, the enormity of all of nature waiting to find a voice that is you.  No wonder it blew his mind.

Nature also blew the mind of Mondrian.  Here he is in 1907, painting a low tonal, mystical landscape. 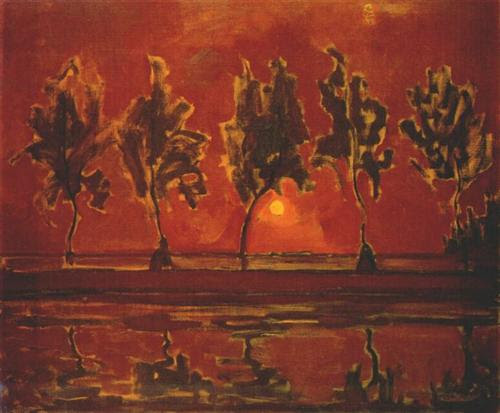 Piet Mondrian, Trres by the Gein at Moonrise (Oil on canvas, 1907)

and here he is after seeing the paintings of Van Gogh. It is as if Van Gogh has lit a match that has set fire to his world.

The thing that struck me most forcibly about my trip to the Netherlands in 1983 was that when I saw the landscape, Mondrian made sense.  Mondrian's work was a logical progression towards expressing landscape in terms of the horizontal and the vertical, and in Holland, that's all you had - flat landscape punctuated by the odd vertical of a church spire of a row of trees.  Mondrian, says AGD, took control, seeing the pattern and structure of the world, distilling, purifying and reducing.

1914 found Mondrian cooped up in Domburg in north west Holland, spending day after day sketching the sea and sky in charcoal. It inspired Mondrian's transition to his abstract grid paintings. Here's the beach at Domburg.

and here's Mondrian's painting of it. 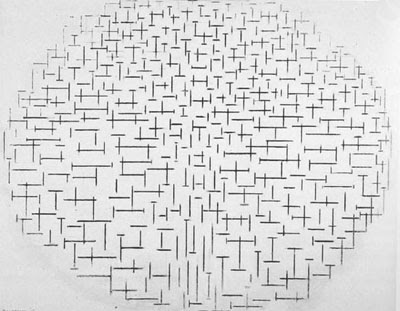 It was only when I saw this painting again during this programme that I thought "Ah - I get it!", and also its resonance of the rows of crosses of first world war graves.

The simplicity of the image, the stripping it down to a sense of just a cross, refers back to the simple church interior paintings of Pieter Saenredam, three hundred years earlier. 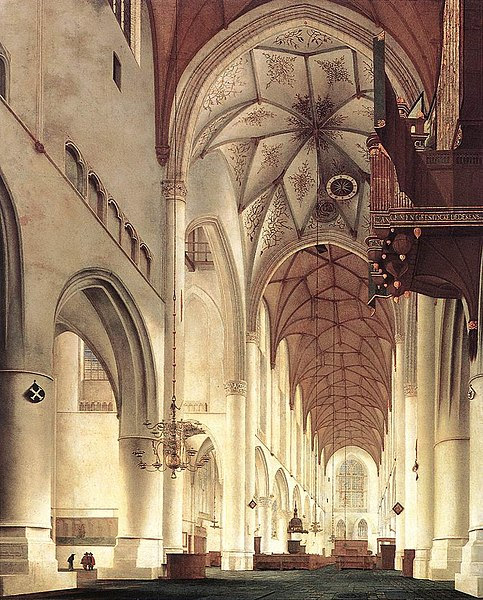 Pieter Janszoon Saenredam, Interior of the Church of St Bavo in Haarlem (Oil on panel, c1660)

Mondrian then went to the most grid-like place on earth to live, New York, and merged the essential underlying grid of nature with the jazz-age vibrancy of colour.

In this programme we even got to see inside the De Stijl house of 1924, unfortunately situated in right next to a busy road in downtown Utrecht, but still very very exciting.


Here's the funky interior, where every window and door, as AGD demonstrated, forms a new piece of 'art'.


However, when Andrew opened the door to the toilet, it was just a normal toilet - not a funky square red and black toilet with a blue seat.  Nor was the stove or the door furniture designed along De Stijl lines - it just looked like B&Q.  I can't help thinking that if Charles Rennie Mackintosh had been designing that house, he'd have paid a bit more attention to that sort of detail.

It was at this point that the programme sort of fell into a bit of a dip, because AGD started talking about Belgium.  Sorry Belgian readers - but it was as if he was told that he was contractually obliged to talk about Belgium for the last part of the programme, and was trying to find something interesting and cohesive to say.

This seemed to involve referencing Tintin and Andy Warhol (who wasn't to my recollection Dutch or Belgian), a quick discussion on Magritte, and then a long piece about Paul Delvaux.

I couldn't quite connect with AGD's argument.  Delvaux's paintings seem to be elusive in their meaning, and the protagonists in them are enigmatic and indecipherably expressionless, despite the oddness of the narrative setting in which they find themselves.  They are oddly free of emotion because you can't really connect with what they're all about.

I felt that the programme had similarly run of emotional steam by this point.

However, the final scenes took us to a vault in Holland where the state had sponsored the making of art by giving grants to artists.  It had stockpiled 50,000 works, of varying levels of competence, before the money ran put in the 1980s.  The art is under lock and key.  We were shown a state which encourages art, but doesn't necessarily want to be challenged by it.

It was a great series.  If it's repeated again, I'd watch it again quite happily.  AGD speaks knowledgeably and with great insight and passion about his subjects.  He takes you on a journey that feels like the natural and obvious progression of things.  And he can do a piece to camera whilst riding a bicycle.  You can't ask more of a man than that.

Watch it on i-player here.