Tolkien-monikered Willard Wigan took a speck of stubble shaved from his chin, and then used microscopic fragments of diamond which he adapted into a tool to hollow out the hair and sculpt an image into it of a golden motorbike, called The Golden Journey.

Willard spent 16 hours-a-day over a five week period producing the piece, to show 'how big small things really are'.

The image  - which measures just 3 microns - is smaller than a human blood cell and only visible through a microscope. It is so small that even the pulse in his finger could have crushed the sculpture altogether.

View a video of it  here.

Meanwhile, IBM has created the smallest ever molecular movie. 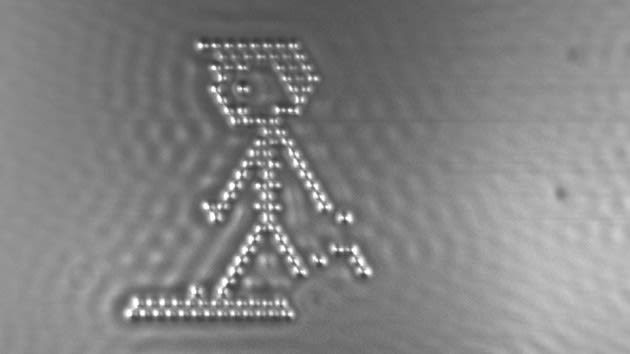 It's a one-minute video of individual carbon monoxide molecules repeatedly rearranged to show a boy dancing, throwing a ball and bouncing on a trampoline.

Anyone who watched Vision On with Pat Keysell back in the black and white 1960s will be familiar with this genre of stop-motion films, which back then always seemed to feature dancing paperclips for some reason.  Paperclips weren't the most engaging of protagonists, but the children's programme certainly seemed to have a limitless supply of them caught in action doing their paperclippy dancing thing. Either that or it was that agonisingly slow film with the tortoise...

Anyway, each frame of A Boy and His Atom measures 45 by 25 nanometres - there are 25 million nanometres in an inch - but hugely magnified, the movie is reminiscent of early video games, particularly when the boy bounces the ball off the side of the frame accompanied by simple music and sound effects.  I guess that knocks Mr Wigan's efforts into a cocked microhat.

See the film in this article here.
Posted by Judith at 02:13