Lowry on the Radio

I blogged earlier this month about the new L S Lowry retrospective at the Tate.

Linking in with this, there were two interesting programmes today on BBC Radio 4 about the artist.

The first was the Afternoon Drama, Mrs Lowry and Son, which you can listen to on BBC I-Player here.

Written by Martyn Hesford, this didn't make for easy listening. Middle-aged batchelor Lowry lived with his bed-ridden mother, who resented Lowry's father for the reduced circumstances in which they later found themselves (but which were the making of Lowry).  She also resented Lowry for even being born and, as she saw it, thwarting her creative dream of being a concert pianist.

Whilst he painted endless paintings trying to please her, she belittled him and loathed the pictures.  She resented that he was living a creative life, the expressive, artistic life which she felt was denied to her through having to look after a child.  He had manacled her to domesticity in his childhood, so she did the same to him in his adulthood.

She also perceived the paintings as epitomising the lower class situation in which they found themselves.  In fact, they blatently advertised their poor surroundings.   Mrs Lowry longed to be middle class and respectable again, and detested her son's working class paintings

It was a Freudian minefield of a play.  His mother was portrayed as such a demeaning, over-bearing woman, that Lowry came across as a saint not to have popped some arsenic into his mother's vanilla slice.

It was a sad and rather disturbing play.  Lowry hid in the attic and painted at night, despite the constant brow-beating and active dissuation from following an artistic path.  How many people have failed to achieve their potential because of similar circumstances?  How many artists have been crushed at the first hurdle, that of gaining family approval and support?

The Times
Of course, it could be that conversely, the very act of family disapproval makes the goal of becoming an artist even more keenly fought for.  Certainly, Lowry never stopped, not for his mother, not for criticism of him as a 'Sunday painter'.  Perhaps he was almost primed for that wider dissaproval because of the barriers he met at home.  But, like his constant craving of approval from his mother, he also craved the approval and affirmation of the art world.

The play also made plain the ordinariness of creativity.  People often think of artists as leading exciting, bohemian lives, of being other-worldly free spirits, constantly creative and at the whim of inspiration.  If they paint 'real life', it's the gritty artistic reality of the Moulin Rouge with a glass of absinthe, not clocking on at the factory.  Lowry bursts the myth, pricks the bubble, shows the uncomfortable truth that artists can also be rent collectors, and creativity has to be planned, shoe-horned amongst the mundane, the routine, the family life and the tax returns.

So there was Lowry, spending his days collecting rent,  and coming home to make soup and cups of tea for his mother.  Painting was done at night in the attic.  Barbara Hepworth bemoaned the number of sculptures that were left unmade because her triplets went down with childhood illnesses simultaneously.  Even Van Gogh must have had to stop painting sunflowers, multi-million pound masterpieces, just to go out and do the shopping.

The other programme on this afternoon on Radio 4 about Lowry was Lowry Revisited.


Presenter Michael Symmons Roberts grew up in Manchester.  He even recognised some of the figures from Lowry's paintings as real people he had seen locally (such as the war-wounded crippled man on the skateboard to the right of this painting). 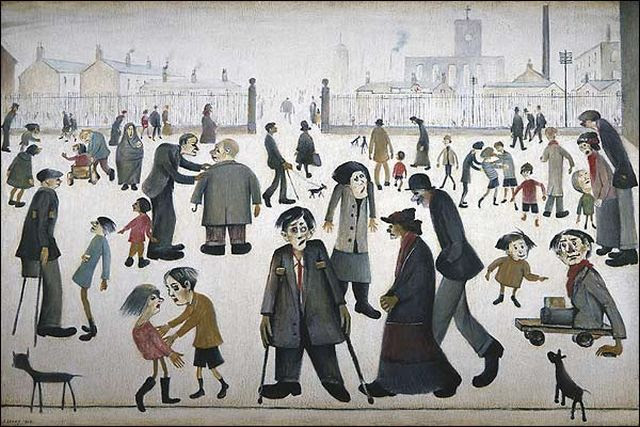 Lowry Revisited is an exploration of the working class/middle class divide which was the basis of the Mrs Lowry and Son play, and also of the north/south (of England) divide.

Mrs Lowry, as I have said, disliked her son's working class paintings because they were at odds with her perception of herself as middle-class.  Is the division of critics over Lowry's worth and legacy also because of this question of class?  Is Lowry too ordinary, too 'northern' to be a 'proper' painter and hang on walls in the south?


(It always makes me laugh how far south the 'north' is.  It takes me four and half hours to drive down to Sheffield...)


The programme talked to art critics such as Nick Clark of the Independent.  How do they feel about the Tate, a gallery at the Metropolitan epicentre of all things arty and southern,  being taken over by a rent collector from the north?  Is all this talk of Lowry's amateurishness just snobbery?

Or is he simply just not up to the grade?  Certainly, he is not widely represented in major collections outside the UK.  Or has he just not been fully appreciated yet, and is yet to be recognised as a social commentator, a documentor, someone who painted real, ordinary people in the way that Van Gogh did? 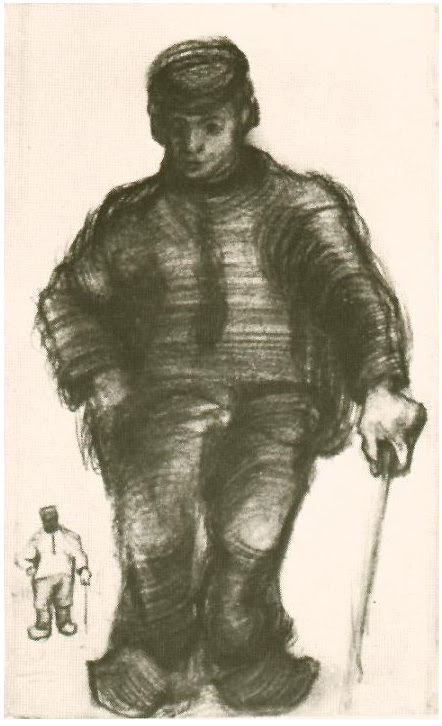 There was a lovely section at the end of the programme, where the photographer Dennis Thorpe talked about how he knew Lowry.  In 1976 he went to see Lowry's house (in Mottram-in-Longdendale, Tameside) just shortly after his death.  He arrived, upsettingly, to find it being stripped of all the paintings.  He asked the people to wait, so that he could go inside and take some photos to record how the interior looked.

Inside, he took photos of how Lowry had lived, how he had hung certain of his own paintings on his wall, the Pre-Raphaelite pictures which adorned his bedroom, and the coats hanging by the door.  A short while later, it was all gone.  His house and dining-room studio were stripped apart in a careless way that would shock us if it was Van Gogh's Yellow House or Monet's garden at Giverny. 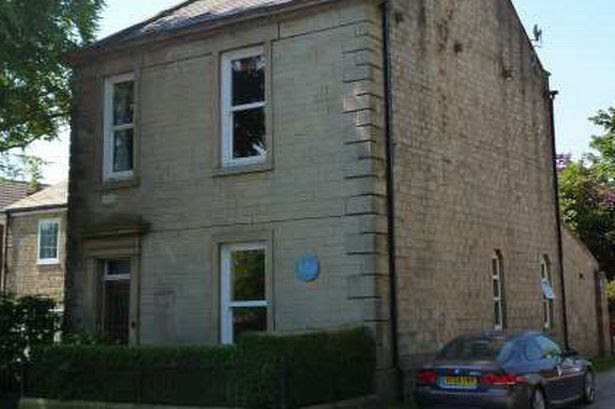 There's an article here which talks about the house,  and has a word from my distant relative Nick Bridgland of English Heritage, who says  “LS Lowry was a major figure in 20th century British art and his work is found in many major collections internationally." (Mostly in the basement, it has to be said.)  “His house, traditional and modest, echoes the subject matter of his work."  So there you have it - Lowry is traditional. Apparently he hated the house, even though he stayed there for 28 years.

So is Lowry a world-class talent, a Van Gogh or a Monet, as yet not fully appreciated and recognised?  Or is he just an insubstantial stick-man of an artist?  And if he's so bad, why not just ignore him, why does he polarise such opinion?

Can someone be a really bad artist and a genius both at the same time?  As I showed in my blog here, Lowry could draw beautifully, learnt from years of studying at art school (even if, to the art establishment, none of his art school education actually counted because it was in the evenings), but his paintings are often dismissed as poor and 'childish'.

However, there's a difference between being a poor painter, and choosing to paint in a seemingly poor or childish way.  The first is your only choice, the second is an informed choice.  Picasso famously said, “It took me four years to paint like Raphael, but a lifetime to paint like a child.”

By that Picasso meant to draw well, you must draw without inhibitions, preconceptions and prejudices.  As an artist, you must see beyond those things, or else that is all you draw. 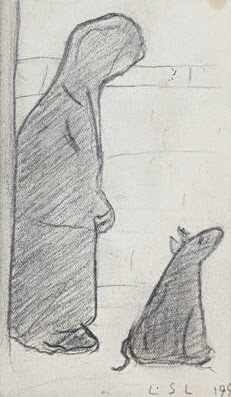 Lowry could have made a beautifully detailed 4H pencil drawing of the crippled man on his skateboard (for example), with all the detail of the Pre-Raphaelite masterpieces that he so admired, but it certainly wouldn't be in a retrospective in the Tate if he had.

That's because he would have made the crippled man into something he wasn't, something suitable for a middle-class drawing room, something processed and sanitised.  Instead he's not processed, not judged, not sanitised, not pitied, just recorded, in exactly the same way as everyone else in Lowry's scenes, because he was a real person whom Lowry knew and saw on the streets every day.  The 'childish' way in which Lowry paints gives the scenes and the people a truth.


Usually the famous bad artists are good self publicists, showmen spreading their thin talent as far as people with money are willing to let it go.

As Damien Hirst said in an interview in 2009, 'I've always thought that art and crime are very closely related. Crime is incredibly creative. There's the bank. If I buy that site next to the bank, I can dig a tunnel, break up the floor, take the money out, go back through the tunnel, and no one would know I was there. That is exactly what art is like.'  (Mr Hirst's comments are of course a clunky reworking of the rather snappier "Bad artists copy. Good artists steal.” from the Bank of Picasso.)

Is Lowry, then, just some clever self-publicist?  Lowry liked to create mischevious, misdirecting mythologies about himself.  Has he also pulled the wool over our eyes, passing off childish work as real art in some audacious art crime?  Is he simply just a bad artist after all? Or are our opinions of him to do more with prejudices within ourselves, about art, taste and class?

Listen to the programmes.  See the show at the Tate.  Make up your own mind.