Now that it's the school holidays (and Wimbledon, and the Tour de France,), I've cut down to just 8 hours work a day* so I can spend some time with my son.

At the moment I'm getting ready for a couple of summer shows, and one at the Lime Tree Gallery in Bristol in September called Water Water.

Here's one of the paintings, a little loose acrylic picture of one of the boats on the shore at Aldeburgh.  The shore is shingle with no harbour, so they have to pull the boats up on the beach. 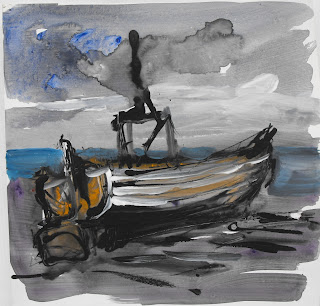 They recently had an outdoor performance of Benjamin Britten's opera Peter Grimes on the beach.  The opera tells the story of a Suffolk fishing community, and Britten was inspired by the sounds of the sea at Aldeburgh which he incorporated into the music, so it was wonderfully appropriate.  They used the boats on the beach (many of which I've painted) as the setting for the stage.

It must have been amazing to see with the sun setting behind.

This next painting is of the Isambard Kingdom Brunel's ship the SS Great Britain, which is docked at Bristol, just opposite the gallery.  It's a great setting for a gallery, overlooking the harbour, so a show about water is very appropriate. 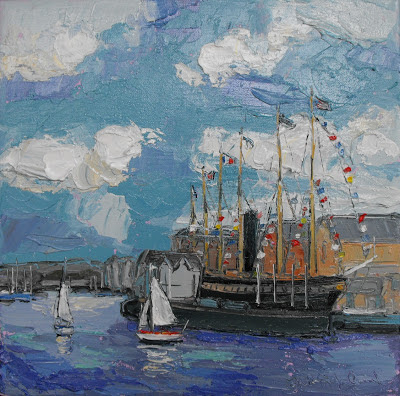