A new world record auction price for a painting by a woman was set yesterday.

£28.8 million was paid for this top-notch floral piece by Georgia O'Keeffe.  Originally estimated to fetch around £9.5 million, two keen bidders fought it out, smashing her previous record of a mere £3.9 million set in 2001. 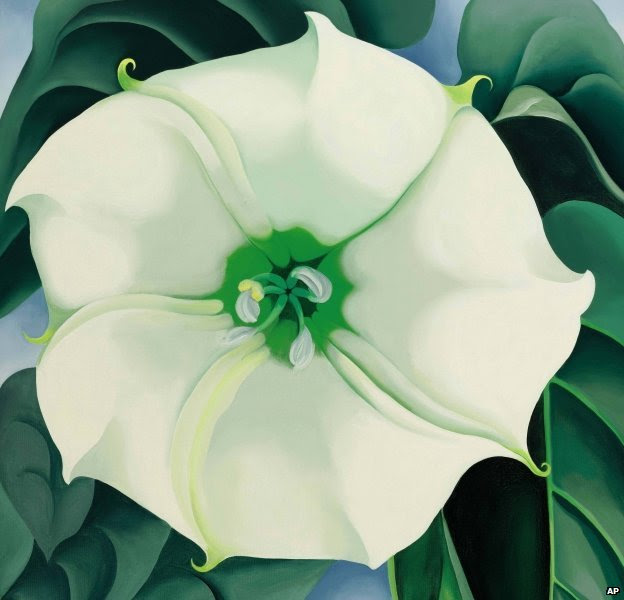 But in the art market, being a woman artist is bad news - the plain fact is men sell for more.  The art auction record is £90.8m for a Francis Bacon piece.

Now, there are simply more artists who are male.  Lots of competition.  You could argue that that might make women's art more desirable, being rarer.  But no.  So why the discrepancy?  Is it sexism, and the market just values female art less?  Or that women don't have enough relevant things to say?  Or they say them in ways that male purchasers (because it's mainly men buying) can't identify with, ie. big daisies?  Women's art tends to be smaller, more emotional, less  in-your-face.  That would tend to suggest that market forces are telling women that their sort of art is less appealing, less marketable, less sellable.  Women - know your place.  Or is it that women just don't make good art?  Daisies are just a bit rubbish.

Anyway, the interesting thing about this painting is that it's being flogged off not by a private seller, but by the O'Keeffe Museum in Santa Fe, New Mexico.  The 17-year-old museum decided to sell three paintings from its collection of 1,149 works by the artist. Before the sale, its director, Robert A Kret, told the New York Times: “The museum holds half the artist’s output throughout her life. But still there are gaps that need to be filled.”

Selling your best exhibits when there's a finite supply is a bit odd.  O'Keeffe died aged 98, but a lifetimes output of around 2,500 artworks over such a long career isn't that much.  Artists don't retire, so I make that around 30 paintings a year.  What on earth was she doing the rest of the time??

But by selling three of their stock, the museum is not only trading up, but is increasing the profile and kudos of O'Keeffe in the art market.  Smart.

Or maybe they've decided to invest in some decent stuff by men...?

Read more on women painters in my blog HERE.