Ai Weiwei at the Royal Academy

It's the final week of the amazing Ai Weiwei (he of the Tate sunflower seeds) exhibition at the Royal Academy in London.  Such is demand that the show is open all weekend, round the clock, to accommodate the number of visitors.  He was even able to visit his own show, having been granted a visa at the last minute. 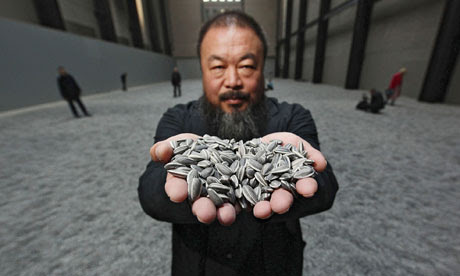 No wonder the show is popular - Wewei is a phenomenon, an artist of breathtaking honesty and inventiveness, whose work is all about truth - truth of material, truth of purpose, truth of story-telling.

Some artists produce exhibitions which are born of trivial premises, empty ideas, lacking in skill or craft or sincerity.  Ai Weiwei is the antithesis to all of this.  He literally lives his art, which is full of reason and purpose and direction and steely determiniation.

Going into the courtyard of the Royal Academy, you are met with a grove of his Iron Trees.  I first met one down in the Yorkshire Sculpture Park.  These are huge chunks of real trees, bound together with bolts and cabinet making joints. 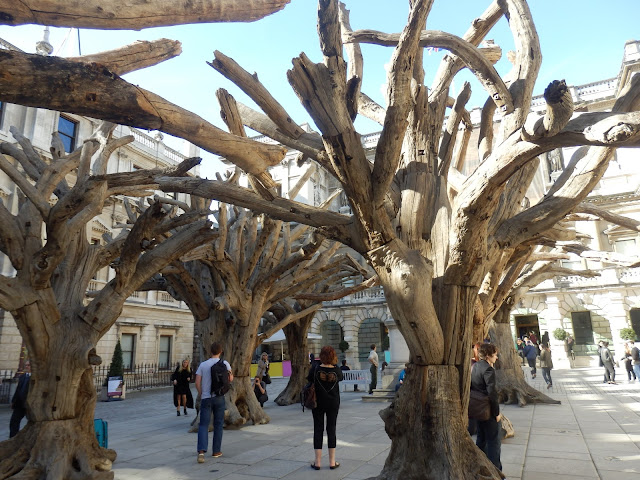 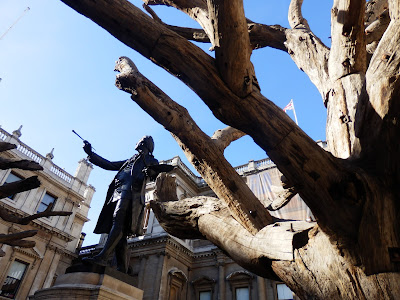 This theme of construction and deconstruction continues inside in several of the rooms.  Parts of ancient Qing Dynasty Chinese temples which were knocked down to make way for expanding modern towns have been reclaimed by Weiwei, and remade into strange pieces of  furniture such as three-legged tables half climbing the wall.  These objects are made by craftsmen using ancient traditional methods of cabinet making which are dying out.  Chinese State 'progress' is obliterating the past, destroying knowledge and craft which has taken thousands of years to accumulate. 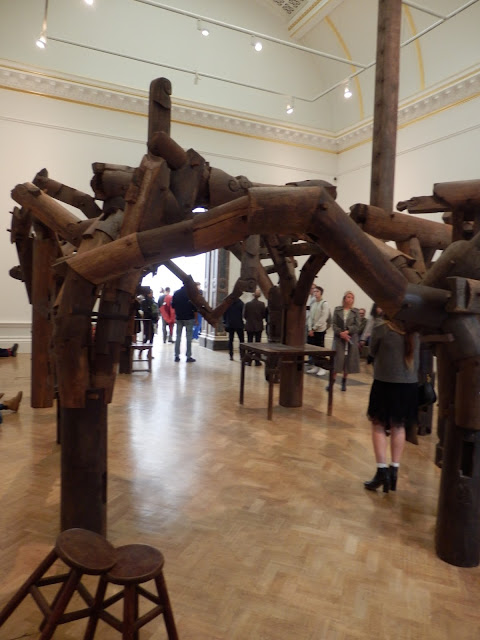 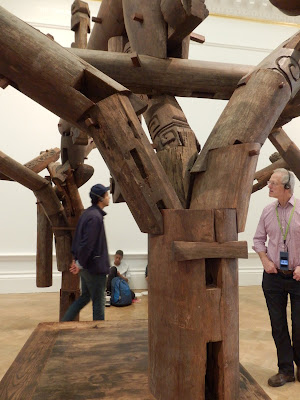 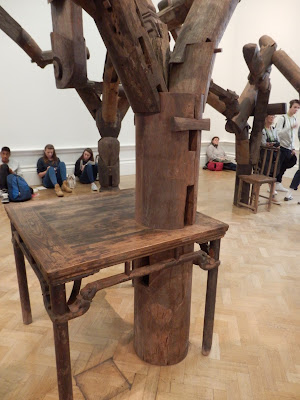 However, the third room is a very difficult one.  It is a room called 'Straight', and consists of a large pile of straight metal rods.  Inscribed round the walls are lists of many, many  names. 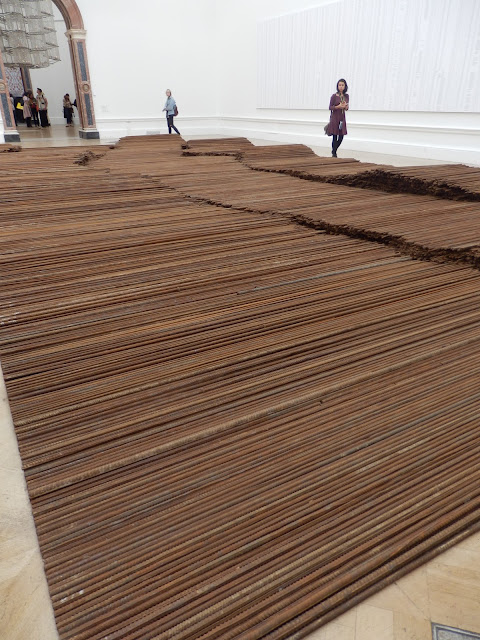 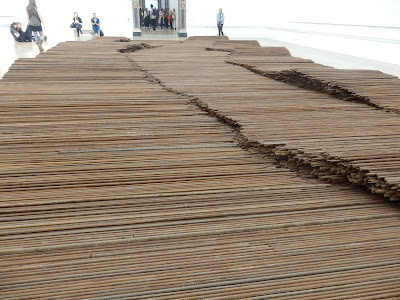 It looks, on the surface, pretty much like any modern pile-of-bricks type exhibition.  But there is a short film which explains what the metal rods are all about.

The film is very, very hard to watch.  The rods are from schools which collapsed in an earthquake, killing 5000 children.  The film shows completely distraught parents rushing to find their dead children in the ruins.  It is heartbreaking.  The buildings collapsed because they were not properly reinforced, the rods being of poor quality, and this cost-cutting was due to corrupt officialdom.

Weiwei secretly bought huge quantities of the twisted rods, in a massive logistical operation, and took them to his workshop.  He then had the rods straightened by local workers, and arranged into the display.  The names of the children surround the rods, bearing witness.

This sort of subversive artistic goings-on has, understandably, not made Weiwei popular with officialdom.  'Souvenir from Shanghai' in the next room is built from the house where he was kept under house arrest , and which was then razed to the ground by the authorities.

Next comes a room with colourful ceramics, jars of powder, and three large black and white photos on the wall of Weiwei himself dropping a vase.

We are told that these are ancient Han Dynasty vases which Weiwei is either destroying or changing in different ways, by breaking, repainting or pulversiting to dust.  One even has the coca cola logo on it.  This is about the way in which China's heritage is altered and obliterated by the State.

I have to admit, this room reminded me of the Italian artist Piero Manzoni.  I think it was the Serpentine Gallery some years ago who exhibited his tin cans, which were to be sold at the same weight as gold.  Apparently this artwork was as a result of Manzoni's father, who owned a cannery, telling his son 'Your work is shit'.  And so that's what the cans were filled with.

Or were they?  If you opened the can to find out, then you destroyed and devalued the artwork.  But the joke was that you'd paid a huge amount (and Tin 54 sold at Christie's in October this year for £182,500) for a tin of shit.  Or had you?  What was really in there?  If it was opened and it wasn't shit, would you complain?  What if it wasn't the artist's shit, as it said on the tin, but just any old random excreta?  How would you know whose it was?  Whatever, Manzoni raked in the money and laughed at the chaos he had created in the artworld by reducing major galleries to arguing over a pile of old poo.

Now, Manzoni may have been mocking the artworld, or he may have been making comments on commodity fetishism, aims quite different and, in the light of Weiwei's work, somewhat less worthy.  But when you look at the rows of glass jars in Weiwei's exhibition with their burnt sienna coloured dust (all remarkably uniform in colour), you can't help thinking, in the same way that I looked at Manzoni's artworks - what's really in there?  Is that really, as we're being told,  the dust of destroyed 5000 year old neolithic pottery?  Wouldn't the dust look different colours, be in different sedimentary layers, different sizes of particulates?  Because the clay would come from different areas.  It should look quite different, and it didn't.

Would Weiwei himself be complicit in the destruction of Chinese cultural heritage?  Which is worse, being complicit, or telling lies?  In other words - are we being tricked? 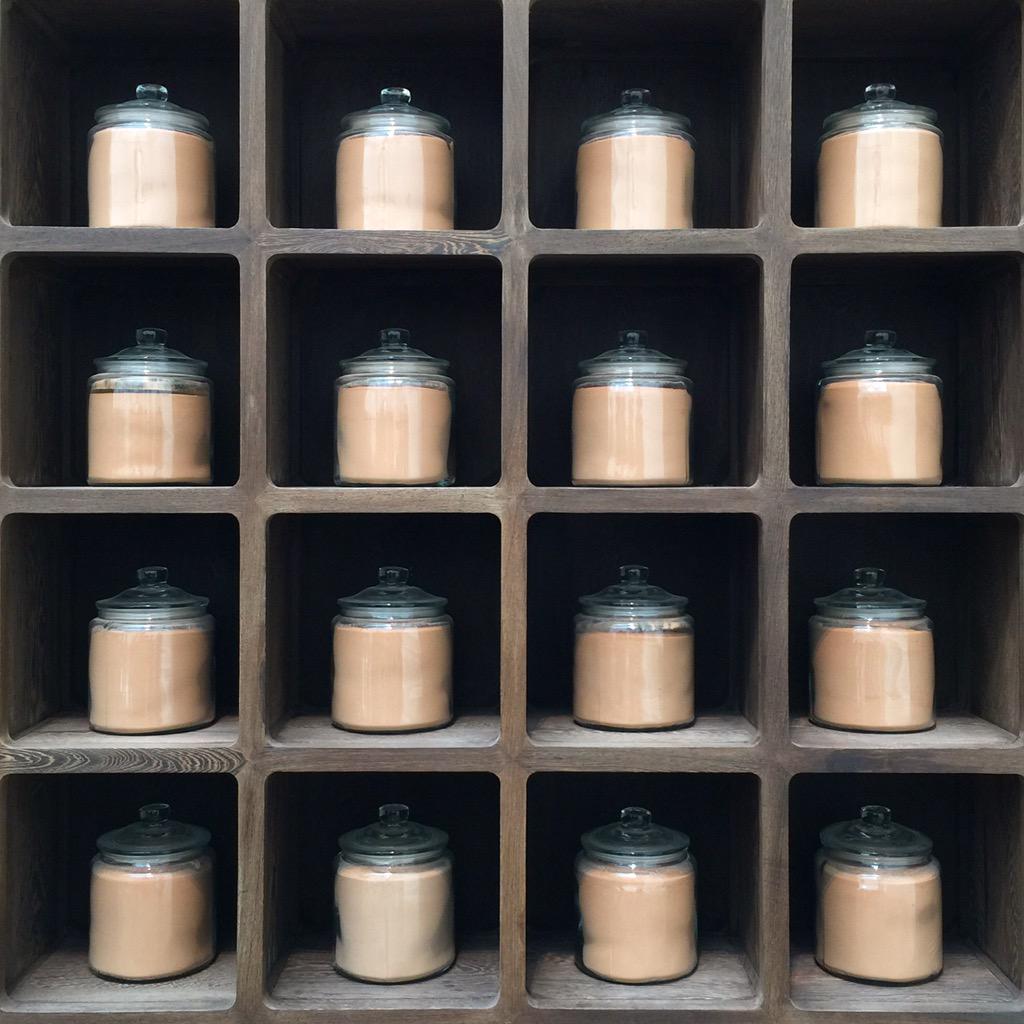 That was a thought that kind of undermined everything in that room.  Because you want to believe wholeheartedly in Weiwei as the good guy.  I didn't want him to be tricking me.  Nor did I want him to be pulverising neolithic pots, either.  Or did I...?

In Room 7, there is a scene of sculpted marble grass, and a marble pram.  Ordinary objects, precious materials, made by skilled craftspeople. 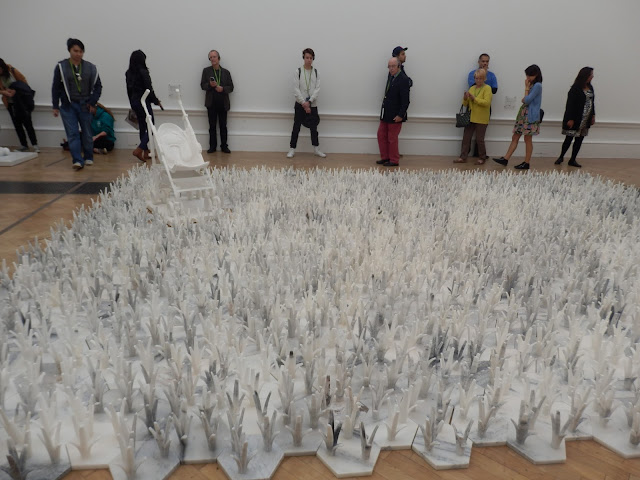 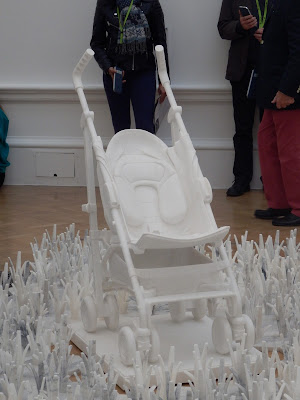 However, the scene is surrounded by marble surveillance cameras.  Big Brother is always watching Weiwei and his activities.  No wonder he's giving the finger in the wallpaper. 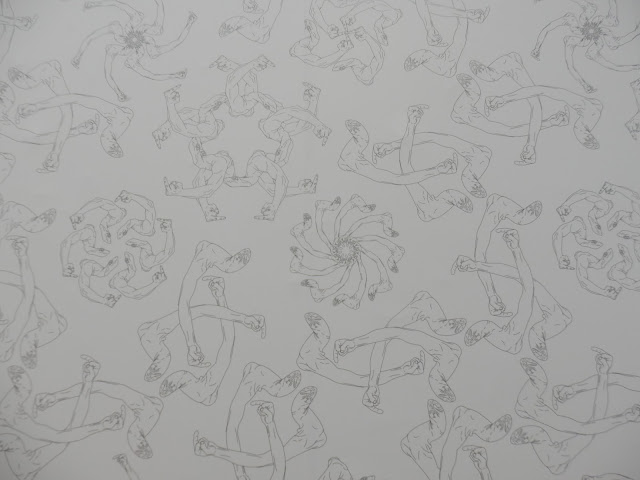 In the next room are boxes which are square metres of traditionally Chinese materials.  One is a ton of tea.  Another is a block of ebony.  Another is a scaled up puzzle box from his childhood.  Weiwei is playing with scale, and with traditional materials.  A quarter of tea or a puzzle box that fits in the hand are proper and charming when they are their original size.  But blow them up, and they are crushing, oppressive, bizarre, disquieting.
Weiwei also has vitrines of beautiful small objects.  These showcase - literally - traditional crafts, such as exquisite china.  However, they are also subversive - the pieces of beautiful traditional china form a puzzle of the shape of China itself, but are decorated with non-traditional demands for the rights of freedom of speech. 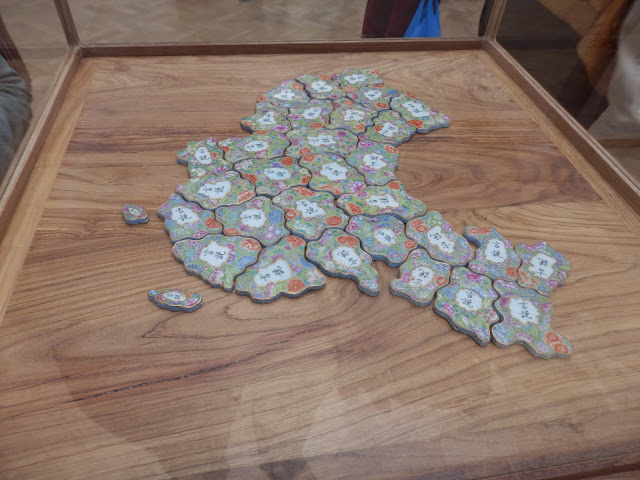 Then in another room, there are more boxes.  The wallpaper shows golden surveillance cameras. 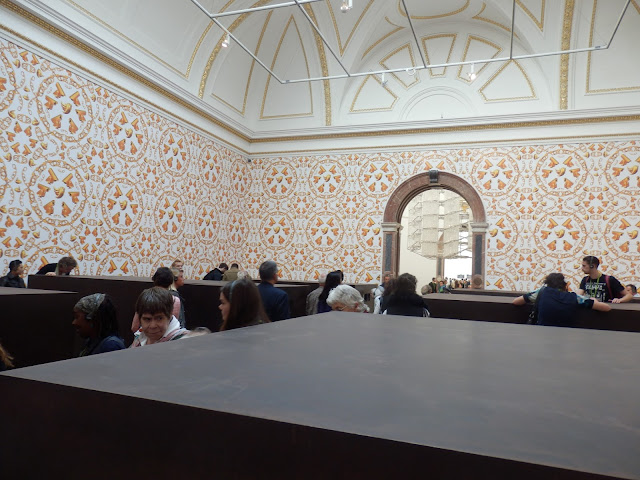 These boxes have little slits and tiny windows which you can lift flaps on, climb up and look in.  inside, each box is a series of rooms.  The rooms have a bed, a toilet, a table and chair, covered in plastic.

There is Weiwei himself, in different situations.  Eating at the table.  Sleeping on the bed.  Even on the toilet.  And always, by his side, are guards.  These are reconstructions of his actual situation in which he was imprisoned.  And by peering down at him, squinting through the little windows, we, too, are voyeurs, his guards, complicit in his imprisonment.  It's very dark.  This is a man who really has truly suffered for his art.

Then after all this, you come out to the final piece - a glorious chandelier, towering above you.  And when you look closer, you see what it is made of. 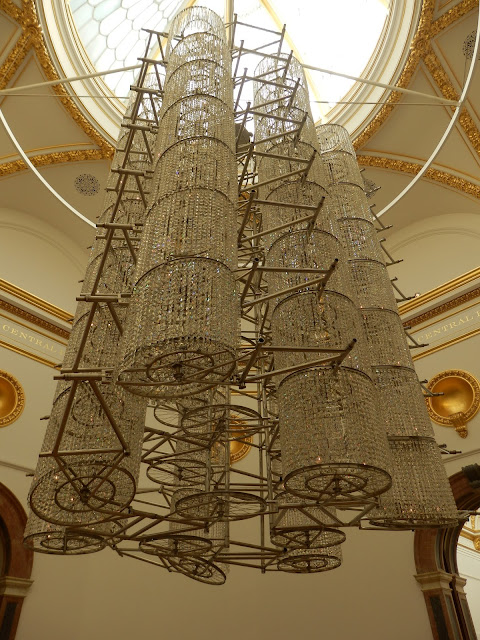 Yes, bicycles.  The most utilitarian and common of Chinese objects.  Linked together by opulent diamonds.  Wealth and poverty combined.  It's strangely beautiful, quite mesmerising in its pattern, like something very natural and organic that has grown over centuries from the ceiling. 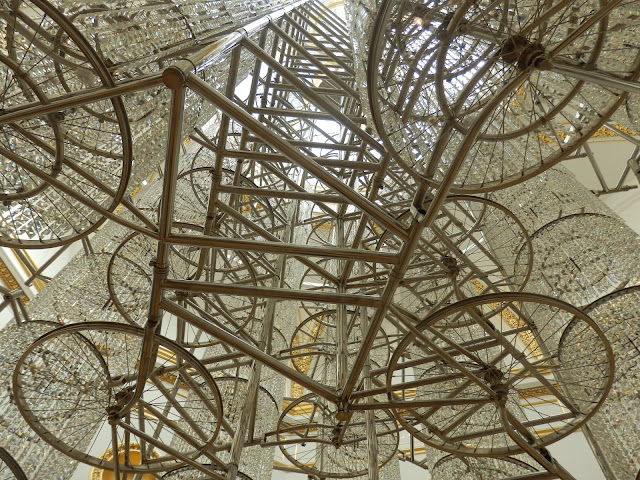 It's a beautiful image at the end of a breathtaking and important show, a show which about huge issues such as the right to freedom of speech and artistic expression, the exposure of corruption, and the sacrifice of history and culture for economic development.  These complex ideas are expressed simply, elegantly, and sincerely.

See this show if you can.

OR - YOU CAN TAKE AN INTERACTIVE ONLINE TOUR OF THE SHOW.