I'm doing another RSW submission, this time for their winter show at the Lillie Art Gallery in Milngavie, called Connections: Scotland and Italy.

I've taken the theme and run with it....

This is a favourite painting of mine from the Vatican, and I took a photo of it when I was there during the summer.   It's not in the Pinocoteca, it's in the rooms as you walk round on the way to the Sistine Chapel, where they have a gallery with modern art.

It's not hung in the best place, being above a doorway. 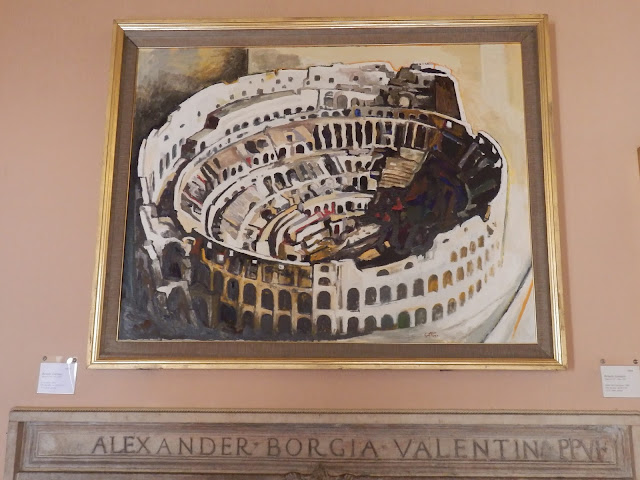 So when I was at the Colosseum a few days later, I took a series of photos of the patterns of the stonework, looking down onto the arena floor.  What you see isn't the original floor, of course, that's gone - what you're seeing are the rooms and corridors beneath the arena, which would have housed the animals and combatants, which would have been brought up to the arena above them by a series of lifts and trap doors. 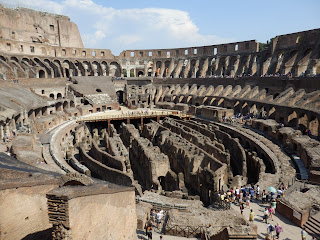 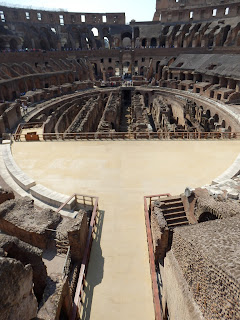 The shape of the arena reminded me rather of this.

(At this point, I'm inclined to tell the story of Caravaggio and his artichoke-based brawl. Ok, here goes...

Artichokes are a very Roman dish, and Caravaggio, whilst living and working in Rome, had ordered some with olive oil for his lunch.  What's volatile about some nice vegetables?  however, the waiter brought him artichokes dressed in butter - big mistake.  Caravaggio was incensed, and smashed the plate in the waiter's face.  A monumental fight ensued, which ended in a court case.

Now, Caravaggio wasn't simply being a hot-headed arty type.  In this case, the waiter was actually making a racial slur by insinuating that fine Roman olive oil was not worth wasting on butter-sloshing northerners like Caravaggio (Lombardians being famous for their love of lashings of butter and cheese).  And he could tell Caravaggio was a northerner by his accent as soon as he opened his mouth.  Italy at that time was not united, and rivalry between the regions was rife.  So Caravaggio smacked the waiter in the face with the artichokes, gashing it open and knocking out teeth.  You don't like my face?  Well, no-ones going to like yours much once I've finished with it.

Anyway - back at the studio, I took a sheet of watercolour paper, applied a layer of gesso, then cobalt blue acrylic, then when that was dry, worked quickly in acrylics using a limited palette of lilac, cobalt, process magenta and white, with some black compressed charcoal and white pastel.

I wanted to keep it unfussy, quite abstract, very gestural and fluid and expressive.

So here's the image of Il Colosseo. 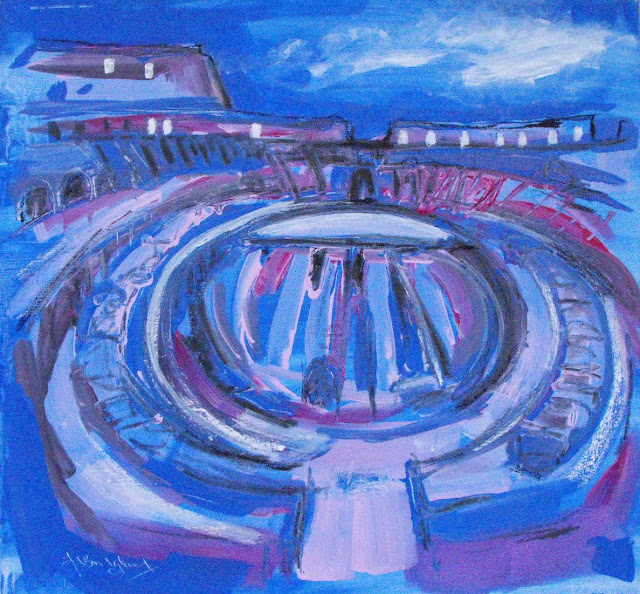 And here it is in its frame, slightly cropped by the mount, ready to go.  Italy painted in the Scottish style.  Scotland and Italy connected. 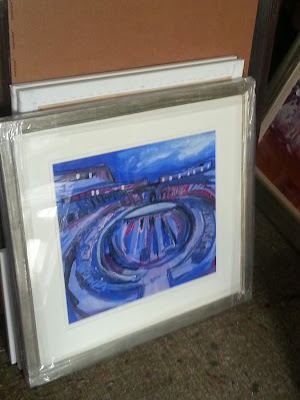