Doctor Who and The Face of Evil

Sometimes during the Christmas holidays, you end up mining nuggets of golden programmes tucked away in strange darkened corners of television schedules.

And so I found myself watching Fourth Doctor Tom Baker-era Doctor Who episodes from the golden age of 1977, called The Face of Evil.

These were the days when stories ran over four twenty-five minute programmes, so it took a month to tell one story. But people kept on watching (Face of Evil gathered a million viewers over the course of the 4 episodes, finishing on 11.7 million).  That's because exciting things happened, plots developed, and there were fights with aliens, rubbish shoot-outs in long silver corridors, and lots of eye-popping improvised costumes. None of this solopsistic self-aware convolutedly obfuscatory the-narrative-created-by-the-author-is-more-important-than-the-characters-ooh-look-did-you-see-what-I-did-there claptrap that you get now.

The first episode of this 14th series (which you can watch HERE) introduced Leela - wonderfully played by Louise Jameson, who manages to totally rock being a strong woman running about in a low-cut pleatherette wisp (designed by John Bloomfield, fact fans) whilst bending forward a lot in an unreconstructed 70s kind of way. 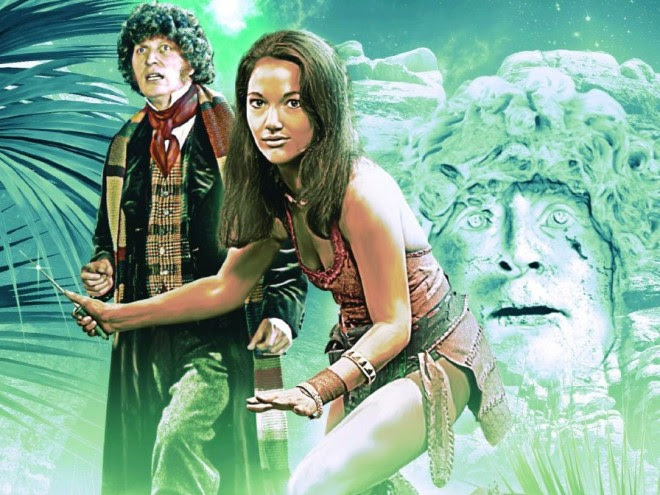 I've absolutely no idea at all what the plot was about - something about Doctor Who landing on a planet he'd been to before, but couldn't remember being to before, and a giant face (his, apparently) which he climbed inside at one point in a weirdly Freudian way, and two tribes who had evolved from other people from an Earth survey expedition who had crash landed on the planet leaving their technology behind, which was then all wrapped up in religion and incorporated into costumes.  Phew.

Which was all a bit startling, as apparently this survey team must have arrived on the planet driving a fleet of classic minis.  It's the only possible explanation for the appearance of the shamen character of Neeva (on the left below) rocking a Mini Cooper 1275 copper cylinder head gasket as a chest plate. 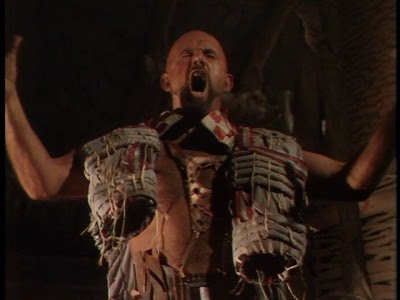 Email ThisBlogThis!Share to TwitterShare to FacebookShare to Pinterest
Labels: Doctor Who Fourth Doctor, Doctor Who The Face of Evil, Leela, Tom Baker Doctor Who