During the Christmas break, I was through in Edinburgh and visited the newly refurbished Scottish National Portrait Gallery.  Apparently it has had £17.6 million lavished on it..

It's a beautiful Arts and Crafts building, and the world’s first purpose-built portrait space. The restoration project has opened up previously inaccessible parts of the building and increased the public space by more than 60 per cent.
If you go expecting to see lots of paintings of people in a parade of famous and historical faces, you'll be disappointed.  It's more about a portrait of a country and its achievements, and isn't merely paintings, but that's the modern museum way of organising and presenting material.
There's a new gallery dedicated to photography, showing romantically nostalgic highland landscapes and some gritty urban urchins, as well as Annan's amazing photographs of closes.

Ken Currie, Three Oncologists (Oil on canvas 2002)
There's also an amazing cast of the head of Dolly the Sheep - a clone of a clone - which I thought was just astonishing. 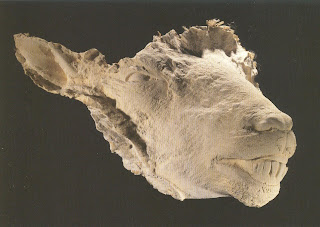 It's not a piece of art as such, and isn't credited with a maker, but as far as I'm concerned it's a far more powerful piece than anything Damien Hurst has ever come up with.  You can see the scrim poking out, and the unevenness of the plaster where the cast has run up against Dolly's thick wool, so it has a roughness and lovely textural excitement about it.  It has a beautiful shape a rhythm to it, bourne out of the necessity of being unable to cast any further than the non-woolly parts of her head.  It was cast on the day she was put to sleep, so it's a death mask, and as such is a very poignant image.
It's not often sheep are named and imortalised, but here Dolly is.  She looks almost like one of the Elgin marbles.
Also on display, unfortunately, was John Bellany's portrait of Billy Connolly - a painting so bad that even when you knew who it was, you still couldn't recognise him....

John Bellany, Billy Connolly (Oil on canvas 2004)
No wonder he had to write who it was underneath - or is it just me?
Anyway, if you do get the chance to go to Edinburgh, do visit the Portrait Gallery.  Or if you've been, let me know what you thought....
Posted by Judith at 03:44