If you're passing by the Royal Academy in London over the next couple of days, take a quick look in the courtyard at the amazing recreation of Tatlin's Tower.  I took this photo of it when I was there in November to see the Degas exhibition. 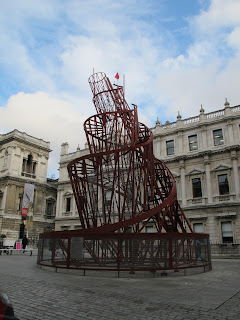 Vladimir Tatlin (1885-1953) designed his Monument to the Third International in 1920, but it was never built.   When I studied it as part of my Fine Art degree, it was an enigmatic unfulfilled idea, so it was a big thrill to finally see it in real life, even if it is just a 1:42 scale version!

Left: Computer visualisation of Tatlin's Tower by Dixon Jones Architects
Right: Vladimir Tatlin (1885–1953), Monument to the Third International: side elevation, 1920, N. Punin Archive © Anna Kaminskaya
Planned as a 400m tall symbol of moderntiy in St Petersburg after the Bolshevik Revolution, it would have dwarfed the Eiffel Tower.  Built from steel and glass in double helix spiral, it consisted of a main framework which people could travel up, inclined at the same angle as the earth's axis, and 4 large geometric structures which each rotated at different speeds.
At the base was a lecture theatre which completed one rotation a year.  Above that was a pyramid housing offices which rotated monthly.  Above that was a daily-rotating cylinder housing a radio station and information centre with loudspeakers for disseminating news and manifestos, and a projector for beaming images onto clouds.
How brilliantly mad is all that?  But I can imagine that if it had been built, it would never have actually have worked - a bit like the Science Tower in Glasgow!  Plus, there's just far too much rotating going on...

There's an interesting article here if you'd like to read more...