Mark making with a palette knife

Here's some pictures of palette knife action!  Hopefully it will give you a few ideas about mark making.
This is the scene in the studio.  I've got my new canvas ready with a coloured ground, the image that I want to paint ready.  The idea of how I want to do the painting is in my head (the general tone and feeling of what it was like being there - stormy, sunny etc), with the photograph blown up and taped to my easel, and my palette all laid out.  Time to go!
I usually work from the top down, so it's sky first.  I know what sort of mark I want to make - something big and expressive - lots of big blustery clouds and airy volume.  So, picking up the mixed paint from the palette with the narrow edge of the knife... 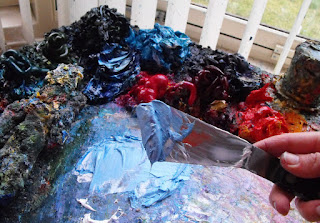 That's the amount of paint that I want to put on the canvas in one big mark, and it's all ready to go on the edge of the knife there, so the mark is going to be the width of the end of the blade.
Here goes... 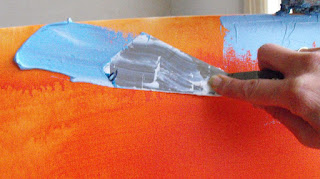 On goes the paint in a nice big expressive smooth mark.  You keep moving the knife in a controlled directional sweep as long as you have paint on the knife, so I suppose it's a gesture that lasts about two seconds to complete.  Varying the pressure gives a different mark. 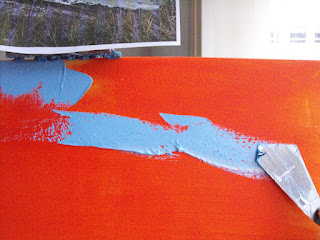 The orange mid-tone of the background is the complimentary colour to the blue of the sky - as you can see, the paint applied by the palette knife doesn't go on in a completely smooth lump.  It has texture to it, especially round the edges on the tooth or roughness of the canvas, so that the background shows through a little bit.  That means you have the blue and the orange working together, making each colour extra zingy - the blue looks bluer because of the orange.  (Old trick I picked up from Delacroix.)
I don't know exactly how the mark is going to look until I've finished making it.  It might not be the right one, but you look at it and think 'is that saying what I want it to say?'.  If it isn't, I change it, by modifying it, or by making a different mark.
But unless you're making marks, and making mistakes, and making corrections, you're not actually painting. 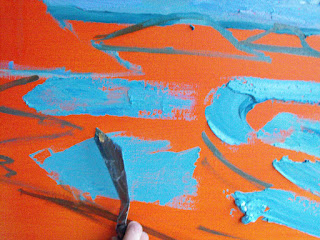 This part is the sea, which I roughly sketched in with a small watercolour brush and thinned prussian blue, just to get a sense of the shoreline and where I wanted the main movement of water and waves and tide to be.
You can see that the palette knife has created some nice large rounded texture and lumps in the sweeps on the right.  I have now put a little paint on the knife and dipped it into my dish of turps so that it carries a film of turps on the blade.  I'm then drawing the edge over the canvas with a scraping action, so that the paint is both thinned and scraped off, giving a very flat, thinly painted area.  This is the part where the water is coming into the beach, so there's not so much in the way of waves.  I therefore wanted a calmer, flatter area of paint to form a contrast.
There has to be contrasts, otherwise the paint surface would look too busy and unreadable, like an action movie that's nothing but explosions.
As I said before, there's no right way or wrong way of doing things, it's just a case of trying things out and seeing what works for you.  I use my palette knife in a variety of different ways, and use it to apply a lot of different marks.  You can even use the tip to incise very very fine marks right into the paint, so it can be a very delicate tool, not merely for trowelling the paint on.
Give it a try.  See if it works for you.
Posted by Judith at 03:19