Painting in the Conwy Valley, Anglesey and Snowdonia

Preparations for my Great Welsh Journey show found me starting out in September last year at Llandudno in the north.  It was the beginning of a journey that was to take me right round Wales from top to bottom. 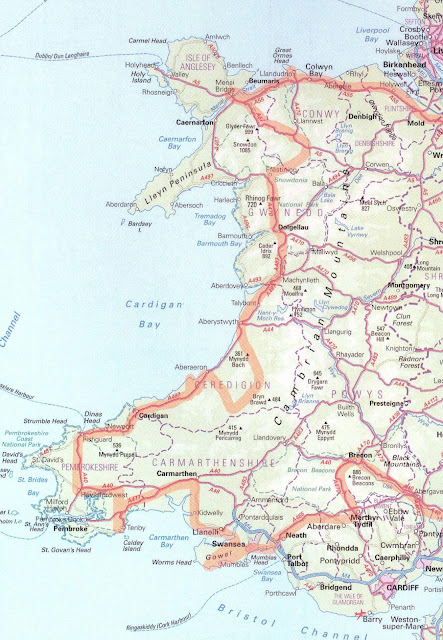 Llandudno has a lovely, long Victorian pier.  This was really exciting for me, as it reminded me of the pier at Eastbourne, which I have drawn and painted on many occasions.  I did a number of small postcard sketches as well as a mixed media drawing. 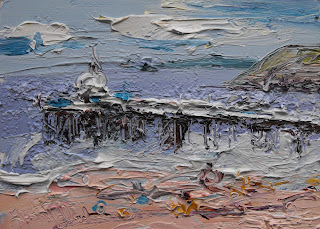 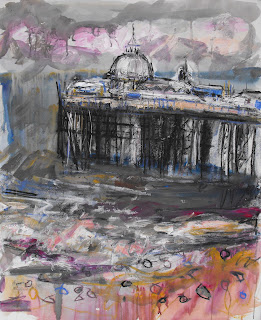 Rainclouds Over Llandudno Pier (Mixed media 29 x 24)
Using watercolour, acrylic and pastel, I tried to get the feeling of the great man-made structure striding out into the great organic swell of the sea, something at once grand and strong, and yet also vulnerable.
Moving round to the bay at Conwy, there were dark rainclouds moving in from the Irish Sea, but these made a lovely contrast with the subtle colours of the sand. 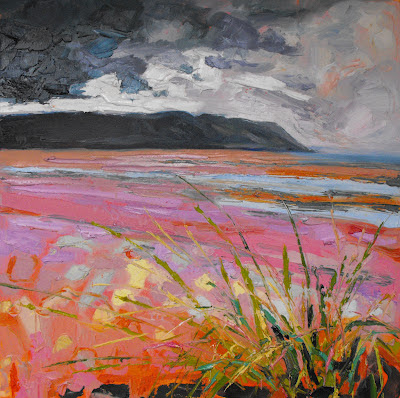 Conwy Sands (Oil on linen, 32 x 32)
In the morning at Anglesey, it was raining pretty hard, and it was often difficult to see the Menai Bridge through the mist.  Then the clouds would lift, and I took a lot of photos of the bridge spanning the straits, which I later made paintings of using acrylic to convey the loose, watery feel.
Morning, Menai Straits (Acrylic, 10 x 10)
Travelling through the mountains of Snowdonia, the weather was again terrible, with heavy rain and low clouds obscuring the mountains, which would sometimes lift to reveal glimpses of the landscape.  There were lots of sheep at the side of the road (which became models for more postcards), and purple heather and waterfalls up the hillsides.
On to Betwys y Coed, all wet slate, autumn leaves and a river with waterfalls running through the centre of the town.  I took photos from the bridge and did little studies and acrylics as well as larger canvasses.
Waterfall, Betwys y Coed (Oil, 5 x 7)
River in Early Autumn, Betwys y Coed (Oil on linen, 24 x 26)
By the time I got to Blaenau Ffestiniog, the rain was torrential.  Great heaps of slate rose up above the town, and it seemed as if everything was wet and grey.  It was amazing. 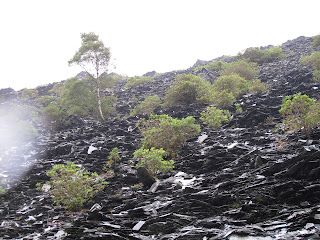 I climbed up one of the heaps, and took lots of pieces of the beautiful shiny slate.  It was gorgeous stuff, and I became quite engrossed in looking at all the different pieces and all the colours and patterns.   Every piece was different.
However, by this time I was covered in mud, soaking wet, and my camera was full of water between the filters.  Time to dry off!
Posted by Judith at 12:39