Painting in Swansea and the Gower Peninsula

For the first day on the south coast around Swansea, it was again all rain.  A trip round the Gower peninsula, ending at Rhossili Bay, was biblically wet.  A long walk to Worms Head ended in a complete soaking! 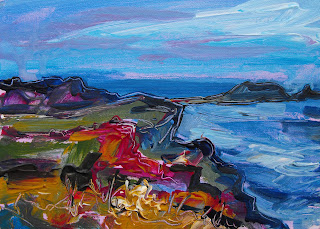 Worms Head (Acrylic, 5 x 7)
A herd of patient cows with their calves stood in a field on the headland and they, too, became models.
Cow and Calf, Rhossili (Oil, 5 x 7)
I hadn't appreciated that Swansea had such a lovely big beach, and on my way back I was able to get some end-of-the-day photos (once I'd dried my camera out again) across the sands of the sunset over the Mumbles in the distance.
End of the Day, Swansea (Oil on linen, 16 x 16)
The next day was completely different - blustery and sunny, with bright skies full of lovely quick-moving clouds.  Exploring the little bays round the peninsula, which had beach-huts and surfers, the bright sun and blue skies made the scenery look almost Mediterranean. 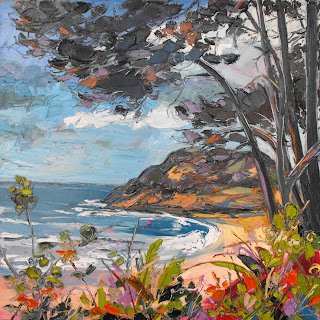 Caswell Bay (Oil on linen, 30 x 30)
Once again at Rhossili Bay, with its wide sweep of sand, I took a series of photos which would later be turned into a number of postcards, acrylics, and the centrepiece of the show, a large 32 x 48" canvas. 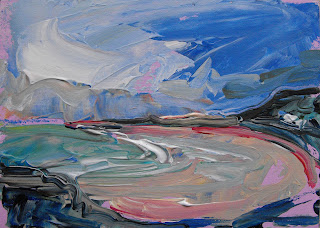 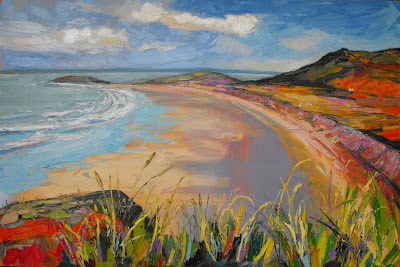 Rhossili Bay (Oil on linen, 32 x 48)
I find that it's easy to get mesmerised by one particular aspect of a landscape, and to concentrate on that to the exclusion of all else, and with such a wonderful coastline, it's obvious to look at the sea the whole time.  However, I found that there were some beautiful fields on the Gower which had just been harvested, and the round bales of hay made beautiful shapes, as well as being a rich contrast in colour to the blues of the sea.