Apparently you can get a live webcam of Damien Hirst's studio, where you can see all the exciting multi-million pound creativity as it happens.   Gripping!

Hmm...not much happening, is there?  In fact, you won't see Hirst himself doing anything arty - he's got assistants for that.

So I had a look for some others.  Here's Antonino Cammarata, painting away at landscape in Sicily...

Antonino - where are you?

Now, Chinese artist Ai Weiwei also set up a webcam.  He did the sunflowers seeds at the Tate as part of the Unilever series - you may even have the odd sunflower seed yourself.  In fact, they're currently selling on Ebay at £28 each. 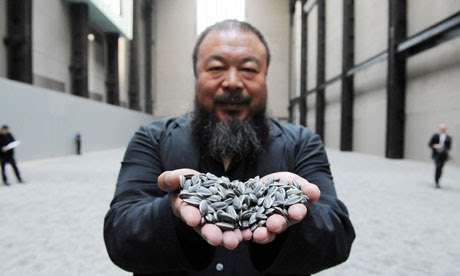 
Weiwei launched several webcams broadcasting from his studio back in April on a website called “Weiwei Cam”. The webcams allowed you to see Ai working, giving you a view of his office, desk, courtyard, and even his bedroom.

This was meant to highlight the issue of surveillance in China. Ai is currently under constant surveillance by the Chinese government due to his open criticism of them.

Unfortunately, the authorities stepped in and shut down the webcams.  So you can't see him either...