Bronze at the Royal Academy, London

Brace yourselves, this one's a biggie!

As well as the latest Bond film, I managed to take in something a bit more cerebral when I was in London, namely the Royal Academy Bronze exhibition.  Initially, a show about bronze didn't sound very enticing, but it's a show that's had gold-star reviews from the critics.

So, flashing my 'Friends' card at the door, I went to see what all the fuss was about.

The first room sets the tone.  In the centre, there's a single large statue - the 4th century Dancing Satyr, pulled from the ocean by a fisherman off Sicily in 1998.  The year before, the same fisherman trawled up the left leg, and amazingly then found the body and head of the statue to which it belonged the following year.  Apparently it was brought out of the sea headfirst, as if swimming up from beneath the waves. 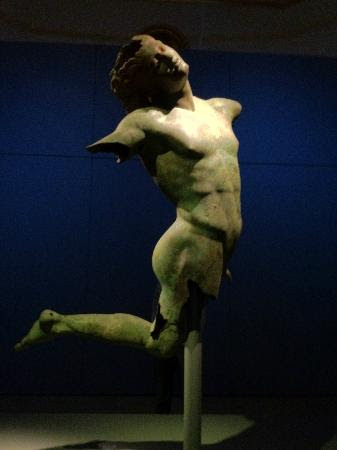 It's a truly stunning, gorgeous piece.  Life size, it has the most amazing presence and movement to it.  It reads as a fluid form from all angles, with an inherent  movement and life of its own.  Thanks to its centuries in the water and the chemical reactions of the salt on the metal, the bronze has a beautiful green patina and texture to it.  The lack of arms and a leg actually add to it, giving it a very modern and abstract feel, and a certain poignancy, as if it it is something beautiful and triumphant and timeless against adversity.

The Greeks were the first to perfect the techniques of casting life-sized figures in this amazing medium, and there is a room which explains the casting method with a very informative display.

Casting bronze is a painstaking process, involving wax models, plaster jackets, baking and firing and pouring of metal and finishing.  It's a big commitment to make a model of something in bronze, requiring a lot of resources, money, time and effort.  The reward is that you are making something permanant, and something of great beauty.  Bronze confers status and permanence on the object, elevating and preserving it for all time.  Especially interesting in this part of the exhibition is the display of bronze casts of a raven's wing, to demonstrate the different patinas (or finishes) that bronze can have.  You can touch the wings, and they are indeed very tactile.  Bronze can be polished like a mirror, or have a surface like satin, or rough and patterned and textured, or coloured black or green or gold.

The exhibition's strength is that it displays objects by themed rooms, and mixes them up chronologically.  So you can see that very ancient work has resonance in modern work and vice versa.  Sometimes the most ancient piece looks like it could have been made last week.

So in the first room, there is an Etruscan piece made in the 2nd century BC, called Evening Shadows (how they know this I don't know).  It's a long tall, skinny stylised figure,  which looks like it was made by Modigliani. 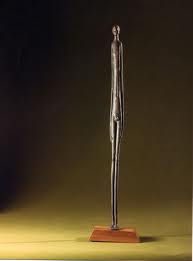 Then there's the vast. towering Perseus by Cellini, made in a single casting (rather than in sections), and possibly the most ambitious statue ever made - how on earth did they ever physically make such a thing?

And in the same room there's also something which was, for me, the most exciting piece, Portrait of a Painter by David Smith, from 1954.

This was made from lots of found art-related objects, such as an artists palette, which were textured with plaster and resin before being assembled and cast.  I can't tell you how exciting an object this was.  Unlike the Perseus, this is something you can imagine making yourself, so I guess that was its attraction and what I could identify with.

Room 3 was all about animals, such as another assemblage of found objects, this time by Picasso, wittily made into his 1951 Baboon (which included his son Claude's model car for the head - bet he was pleased) 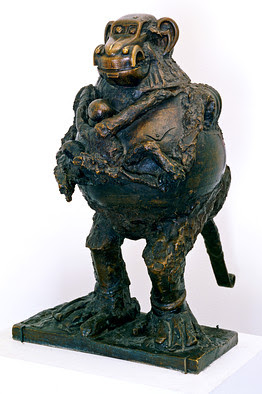 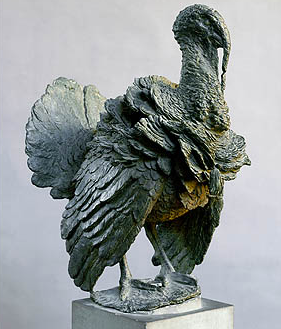 to Giambologna's 1567 Turkey, all life-like feathers and free and textured surfaces - the most life-like and heart-felt thing he's ever done, so different to his highly-finished, mannered Mercury in room 9.

The next room was dedicated to groups, which I have to say didn't do anything for me, and Room 6 was all about Objects, both decorative and functional.  This included such diverse items as the green-man-like 1170 Sanctuary Ring from Durham Cathedral (which I have seen in situ - it must have been quite an undertaking to remove it for the exhibition) to Barbara Hepworth's 1956 Curved Form (Trevalgan). I can understand the Sanctuary Ring as object (and it is such a singularly fierce and grotesque face that you would have to seriously be in dire need of sanctuary before daring to use it)

but putting the Hepworth in that section puzzled me.  However, as it is a sculpture about landscape, I suppose there wasn't really another heading under which it could have been included.  Curved Form is just that - a winged shape; feminine, uterine, pelvis-like, encompassing.

I was at Trevalgan Hill in Cornwall near St Ives earlier in the year.  It's a place where Peter Lanyon also used to return to frequently, as it has long, sweeping curved views right along and round the coast.  The sculpture is a direct response to that view, encompassing many viewpoints.  It's the big, sweeping curve of the coast as you stand on the  top of the hill and look around you.  There are large rocks on the top, and gorse, so that although it is exposed and you have this amazing, powerful view, it is at the same time secret and enclosing, like a castle or fortress.  It is a sculpture about a landscape, but also about a feeling, an experience, and the action of looking.

The next room is about Reliefs, and includes Matisse's clunky Back 1-4, which he worked on over 20 years and moves towards an increasingly abstract and simplified figure.

Room 9 is 'Gods', and includes a Hellenistic Dionysis from 1st century BC.  This figure lay for years on a river bed wrapped in a loose fabric, and this has left a textural imprint on the right leg.

Room 10 is 'Heads', and again the stand-out is a Hellenistic portrait head of King Seuthes III.  It's so immediate and modern-looking.

There's much, much more, for this is a show that's a brilliant demonstration of what an exhibition should do.  It takes a subject, and it explains and demonstrates the medium with a freshness and a logic that astounds and delights.  Just the sheer physicality of getting all those objects into such an show is amazing enough, but to see how such diverse pieces inform and complement each other within the logic of the arrangement is a thing of great pleasure.

What struck me, though, is how few women cast in bronze.  I could only see two women represented, Louise Bourgeois and Barbara Hepworth (although obviously we don't know the identities of the uncredited ancient pieces, but I'd take a stab that they were done by men).  In any art exhibition, there are going to be far fewer women than men represented (for the reasons for this I would point you to Germaine Greer's The Obstacle Race), and I have a personal peeve about gender-based women-only shows.

However, it did make me think about the gender-implications of the medium.  Bronze is about making a bold, permanent, costly piece, a statement that your art is so important it will last for ever.  That's quite an egotistical in-your-face thing, and it demands a lot of time and effort (or arranging a lot of someone else's time and effort).  Very often, women's art tends to not be about these things, tending towards the more fragile, ephemeral, physically smaller mediums, the stuff that's apologetically in the corner rather than 90 foot tall in the middle of the town square. However, look how the women artists use the medium here -  Bourgeois' spiders are menacing giant-sized overbearing mothers, Hepworth takes a very masculine, hard medium and makes it feminine, organic and nurturing.

If you're in London, please do go and see this show.  I doubt you'll get the chance to see anything like this again.  It's on until December 9th.

For more information, go to the Royal Academy website.