That Stolen Modigliani Painting in Skyfall

It was back to the cinema again last night, this time to take my son to see the new James Bond film Skyfall ('not enough car chases').  Which gave me the chance to count the number of times that Q's 'Q' Scrabble mug appears, or to look out for famous paintings.

Read about the paintings included in the scene in the National Gallery HERE, and the painting in Mallory's office HERE, and how they inform the plot.

But there's another painting in the film, seen in the Shanghai section of the film. It's where the beautiful Severine uses a stolen painting as bait in an assassination plot, and the prospective purchaser of the picture is shot.

Here is Severine in front of the painting in the apartment, seen from the window of an adjacent building... 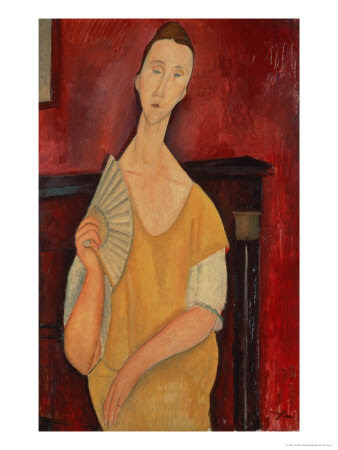 It's Modigliani's Woman with a Fan painted in 1919.

And guess what, it really WAS stolen from a gallery in real life - the Museum of Modern Art in Paris, on May 19 2010.

Speculation is that it really did end up in China, too.

So the Bond film uses a real-life stolen painting as the basis of one of Skyfall's subplots.

This is a device which also was in the first Bond film, Dr No, in 1962, and so it's a way of referencing 50 years of Bond.  Dr No's lair was adorned with Francisco Goya's Portrait of The Duke of Wellington, as a way of expressing the villain's hubristic aspirations (Max Zorin’s desk in A View to A Kill was flanked by Jacques-Louis David's portrait of Napoleon).

Fransisco Goya, Portrait of the Duke of Wellington (1812-14)

The Goya portrait was stolen on 21 August, 1961 from the National Gallery in London, in a theft so notorious that the painting would instantly have been recognisable to the cinema audience. That's the same National Gallery where Skyfall Bond first meets Q.  How clever is that?

Now, how many people are going to actually realise from watching the film that there's a plot all about fencing stolen paintings?  I certainly didn't the first time round, and you also have to get to the end and then rewatch the credits to understand all the references within the title sequence to the themes of Bond coming to terms with the death of his parents, and his own ageing and mortality.

It's a film that takes itself rather seriously, and obviously wants you to see it more than once, by placing all sorts of references and layers within it - a bit like Stephen Moffat era Dr Who.

Plus it's very much a reflection of  the times - an austerity Britain, post-Jubilympic Bond if you like.  It's all Union Jacks, M as British bulldog, iconic blast-from-the-past that's-what-made-British-car-manufacturing-great Aston Martins, backs-against-the-wall in Churchill's bunker with MI6 being attacked from within.

And whilst the screen is filled with lots of London landmarks and English icons, when they 'lay a trail of breadcrumbs' for the baddie to follow Bond and M up the A9 to Scotland, they end up very obviously in Glencoe.  Glencoe?! Which gives you a sense of a somewhat fractured UK, where one end of the country doesn't know that at the other end, Glencoe very definately isn't at the end of the A9.

What a pity there weren't more car chases...

Read more about the hidden meanings in more of the paintings in Skyfall HERE.
Posted by Judith at 15:15