More Paintings on their Travels...

(That's because it takes a while for the photography for all the catalogues and publicity to be prepared....)

Anyway, here's a quick look at what's in transit.

It's going to be at the Lime Tree Gallery in Long Melford, Suffolk, in a show that opens on Saturday November 16th, along with 5 other new paintings. 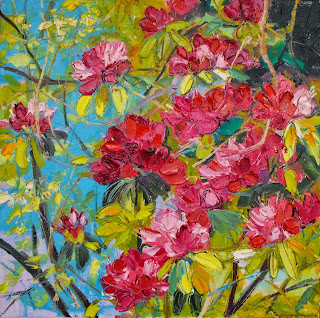 This one, meanwhile, is part of a group which is going to be at Thompson's Gallery in Aldeburgh on the Suffolk coast, so it's going to be travelling a bit further across the county.

Again, I thought it would look really bright and happy - it's of poppies which were growing at the side of the road just by the beach at North Berwick.  I think the seeds had probably escaped from the neatly-tended gardens which are just on the other side of the road.  The view is looking out across the sands to the long low island of Craigleith.

The show at Thompson's Gallery opens in Aldeburgh on Saturday 7th December.