Well, see if you can guess after a few more clues.  The same artist also painted these. 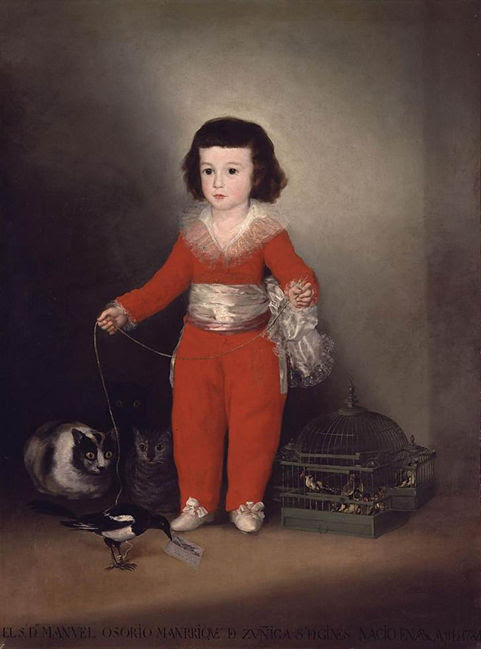 And then it gets a bit odd with giant puppets 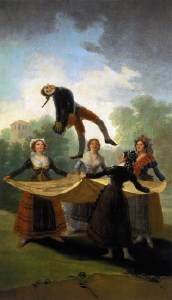 
In case you hadn't guessed, these are all by the Spanish artist Goya, and were painted  at the end of the 18th/beginning of the 19th century.

The Dog, which I showed yesterday, was painted in 1819-23, and is one of his 'Black Paintings' - painted directly on the plaster of the wall of his house, and not intended to be seen.  Here they are in situ.

They are a group of strange and disturbing paintings, with unclear, very personal meanings, painted when the artist was in his 70s, almost completely deaf, and going through a period of profound mental turmoil.

So The Dog is quite unlike anything else painted at the time. 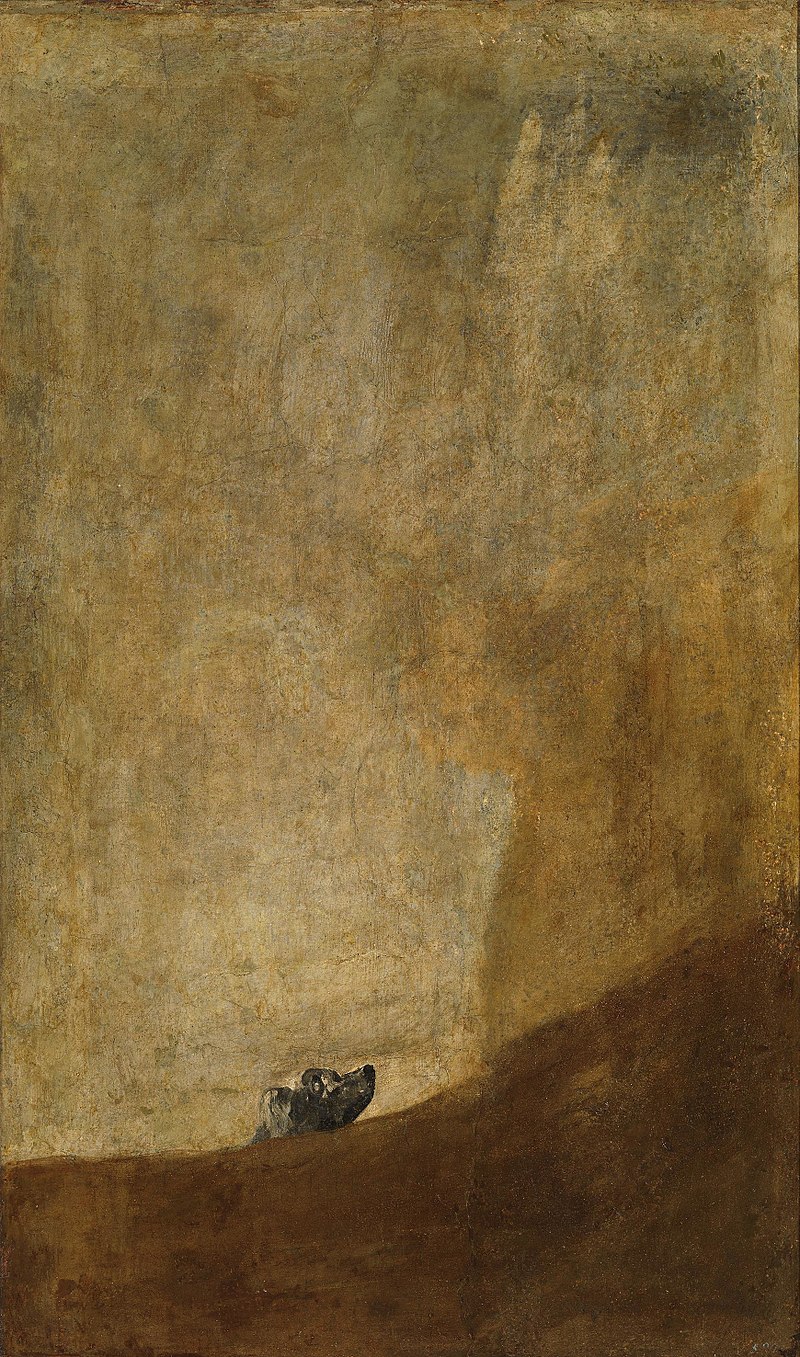 Goya didn't have to show the work, or sell it, or paint it with a client in mind, it was done only for himself.  It had to conform to no-one else's agenda.  It only had meaning for him, it had no viewer to communicate to. It therefore has an absolute, stripped back, naked honesty about it.

Was it Goya's own dog?  Was it the only creature that understood him, that showed him loyalty and trust?  Is the great empty negative space, filled only by the slightly threatening suggestion of a shadow, symbolic of the great void of emptiness that was his isolating deafness? There is certainly an unavoidable sense of isolation, of the colour and joy drained from life, of a mental anguish, and uncertainty.

However, I find pretty much all of Goya's work very strange and quite disturbing.  Even the most conventional, the Naked and Clothed Maja, is disturbing.  So is his still life of the meat Whilst it is a reasonably common subject, in Goya's version, the dismembered animal stares at you from its own death, giving a very disquieting dialogue between you, the viewer, and the subject of the still life.  The meat is actually making silent, unblinking eye contact with you.  The painting was executed at a time when there was a year-long famine, which also gives it a strange twist.

Yesterday, there was a programme on television about Goya  and his series of etchings The Disasters of War, presented by Jake Chapman.  Jake and Dino Chapman made a number of artworks based on the etchings, like this. 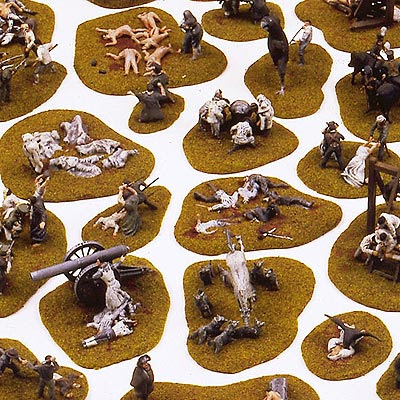 They even scribbled on actual Goya etchings.  I mean actually drew on them (which the Chapman brothers call 'rectifying' them.  Let us be the judge of that.) Jake and Dinos Chapman, Reworking of Goya's The Disasters of War


Anyway, in the programme, Secret Knowledge, Jake Chapman showed us around various galleries to show us Goya's work, went to Zaragoza where Goya was born, and had a look at Goya's actual plates for his Disasters of War series of etchings.  Which was very interesting and informative.

Unfortunately, having banged on in the past about poor art history programmes which are presented by non-art historians, and non-artists, I have to say that, having endured Jake Chapman's woffle, perhaps artists don't make the best and most informative of presenters either.  Perhaps it's because artists aren't taught art history in art schools.  Perhaps they aren't taught how to do research properly or how to present material as lectures. I'm just guessing - I've not been to art school.

The programme guide says that  "As Jake works on a new 'Disasters of War' model in his London studio, he explains why for him there is a fundamental conflict at the heart of Goya's art - in their gruesome detail his images seem to celebrate violence rather than protest against it. Jake explores this contradiction that art history has chosen to ignore, and explains how it tells us something profound about the way we see ourselves and our past."

But good grief, I've no idea what he was saying at all.  I'm an artist, and I've got a degree in art history, and I was sitting in front of the television thinking 'What did he say?  Er...what on earth did that mean?'.  He didn't actually explain anything at all.

Because, sadly, effective communication of his subject was not Mr Chapman's strong point.  He had lots of big words, from the viewpoint of an actual art practitioner, so it should have been full of illuminating insight and meaning.  Er....it wasn't. he didn't even know when he'd produced his own Disasters of War work (1993, fact fans), which was what he went to the Tate with a camera crew to talk about.