Dark Clouds over the Beach, Aldeburgh

Here's a last quick word about one of the paintings in my show before it closes tomorrow.
This is Dark Clouds over the Beach, Aldeburgh, Aldeburgh being a little seaside town on the Suffolk Coast by the North Sea.  Composer Benjamin Britten lived there, so this is the coastal scenery that inspired the famous 'Four Sea Interludes' from his opera Peter Grimes.  So Aldeburgh looks how Britten sounds. 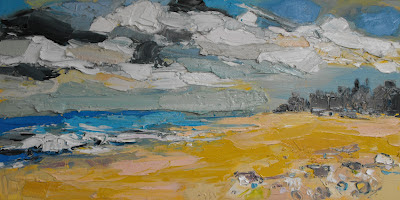 Dark Clouds over the Beach, Aldeburgh (Oil on linen, 20 x 40)
I first went to Aldeburgh because I had a show in a gallery there.  I'd never been to Suffolk, and considering it was so flat, it was never a place that I had thought of visiting in order to paint.
However, being beside the sea is always wonderful, and I quickly found that it was the most amazing place to be, just captivating.  Aldeburgh has the most wonderful long sloping shingle beach with fishing boats pulled up on it.  Walk along the beach and you are having a conversation with the sea and the sky. 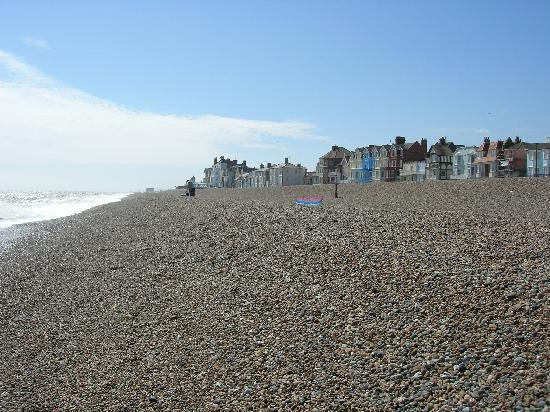 I did a series of studies on small 6" x 6" wood panels using collages of sand from the beach, acrylic, tissue and printed papers.  I used a long format, because that's what the experience of being on the beach is like, but each of the squares works as a stand-along picture. 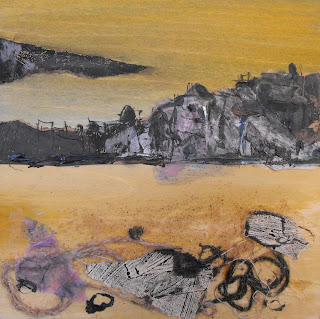 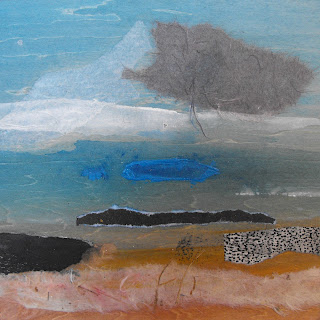 I then scaled up these small textural explorations into the larger double-square format of the 20" x 40" canvas of Dark Clouds over the Beach, Aldeburgh.  I tried to keep the texture and feel and movement of the studies, but just using paint.

There are no straight lines or horizons as it feels as if everyuthing is constantly moving - plus, if you had a big straight horizon line across the middle of the picture, it would look like a sandwich!

I also did a lot of work at Walberswick, along the coast, where Charles Rennie Mackintosh lived and worked during the first world war.  But that's something for another time.