One of my very favourite paintings when I was little was Edward Hornel's Blue Flax. I found the picture, quite small,  in a magazine, cut it out and kept it. 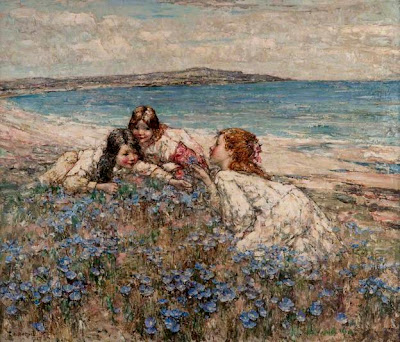 E A Hornel Blue Flax (Oil on canvas 1927)
I think what I liked about it, apart from the colour, was the sense of freedom.  I suppose I was identifying with the children in the picture, who were in an idyllic, sunny, adult-free flower-filled world by the sea.  It was light years away from life in grimy Glasgow in the 60s.
Hornel was one of the group of early 20th century painters known as the Scottish Colourists, and this particular scene was painted at Brighouse Bay near Kircudbright.   The link shows a photo of the actual place today.
Being with a gallery that deals in the Scottish Colourists, and also knowing a picture conservator who restores work like these, I'm lucky enough to see quite a few Hornels close up and be able to handle them.  You can turn the dark canvasses over, and see how he applied the paint and made the marks, using various methods including a knife, and how he used the texture and colours of the canvas by allowing it to show through, alternating the thickness of the paint and types of mark across the surface.  You can also really appreciate how cleverly he composed the pictures, and how he arranged the elements.
Having said all that, he's not really an artist I would choose as a top favourite now - there seem to be great numbers of nearly identical overly-sentimental Hornels featuring rosy-cheeked little girls, and I really don't have any sort of an emotional response to them.  But I hadn't seen all the other paintings back then, only Blue Flax, and I loved it.
Years later, in the 1980s, I was at a meeting in Glasgow City Chambers, and was hanging up my jacket on a coat-stand before going in to the meeting room.  As I did so, I caught a glimpse of blue coloured oil paint on the gloomy wall behind, and, like going through the wardrobe to Narnia,  pushed aside the coats and jackets to see what it was.
Yes, it was Blue Flax.  I'd only ever seen it before on a tiny, faded picture, and here was the real thing, made flesh, so much bigger.  Unloved, hidden away, behind a coat stand.  It was a very strange moment.
I still have the little picture, in a frame.
Posted by Judith at 03:05