It's been announced today that sculptor and artist of the people, George Wylie, has died aged 90.

If you were in Glasgow in 1987, you'll remember his Straw Locomotive hanging from the Finnieston Crane, a tribute to Springburn's railway heritage.  The 40ft long train was then burned as a symbol of the decline of Scottish industry, leaving a blackened wire skeleton.

Or you might recall his Paper Boat, launched on the Clyde as a comment on the state of the shipbuilding industry. 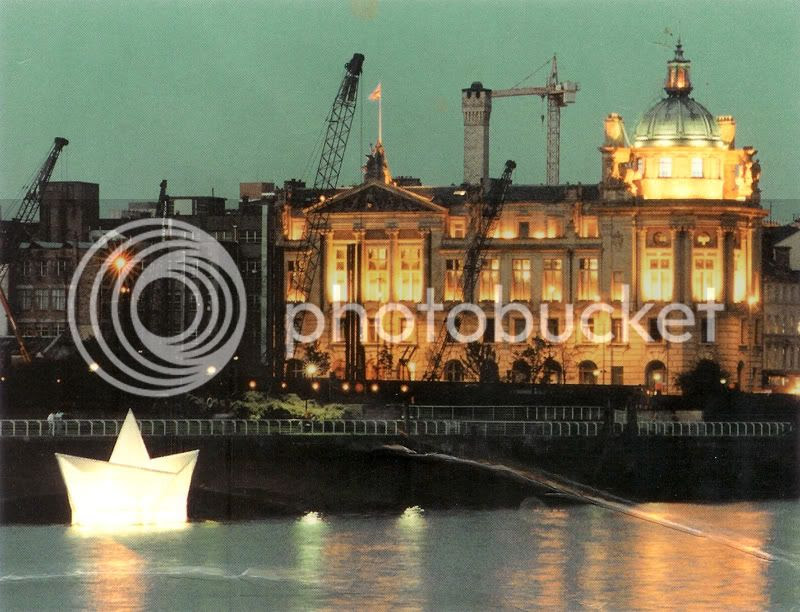 It travelled to New York in 1990, berthing at the World Financial Centre in New York, where it made the front page of the Wall Street Journal. 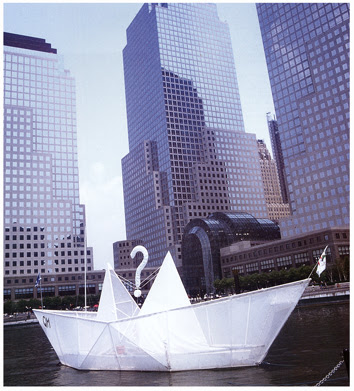 He wrote an award-winning play about world banking, A Day Down a Goldmine.  He was a musician, wrote poetry, and was friends with the German conceptual artist Joseph Beuys.  This from a man who didn't attend art school, but was a sailor in the Royal Navy (during which time he made a life-changing visit to the charred remains of Hiroshima) and later worked in the customs service.

However, in 1965 he decided it was 'time for art', and went to welding classes in Greenock, where he began to recycle materials into sculpture.  In 1979, at the age of 58, he left the customs service to become an artist.  With his puckish nature, he described himself as a 'scul?tor', emphasising the importance of asking questions of the world by putting the question mark at the heart of his art.

Yesterday I talked about the Orbit tower in London.  It's a massive, capitalist jumble of a thing. To me, it's not playful, or beautiful.  What does such a huge thing say?  Does it say anything?

George Wylie, unfettered by an art school training, but stood in good stead by a social conscience and a sense of humour, made massive statement pieces that weren't in-your-face (as well as much smaller ones).  It felt like he was like an ordinary guy who was making things on your behalf, which asked the sort of questions you wanted to ask.

So, if you were asked to make a large monument, what would it be of?

A massive piece of sculpture placed in the public space of people's lives demands a big subject.  Not something egotistical, but a subject which people can identify with, something beautiful.  So if you're from Glasgow, you might just choose to build a train or a boat.  After all, Clyde-built trains and boats were world-famous, big and strong, they crossed empires; but now they're gone.  So you might just think of making your train or boat sculpture out of something as fragile and fleeting as straw or paper.

And now George has gone.  It seemed like he would last forever as well.

Just remember to keep asking the questions...
Posted by Judith at 04:55