I've been asked about the textures of my painting - how do you make paint thick?

My paintings rely on textural contrasts between thick and thin passages of paint.  Oil paint is made up of pigment suspended in an oil medium, and the thickness or thinness of the paint depends on changing the proportions of the medium in which the pigment is held, by adding thinning or thickening agents.


With a 'thinner' such as turpentine, the paint can be transformed into a near transparent glaze, and layered up - a technique mastered by Titian in the 16th century.  He revolutionized the use of the relatively new medium of oil paint with his slow, exacting method of glazing his canvasses. He painted over a reddish ground layer, then built up the paint in layer upon layer. His subtle use of glazes (called velatura or veiling) brought out the richness and subtlety of the different pigments, but it was a very time-consuming and painstaking process. "Trenta, quaranta velature!" ("Thirty, forty glazes!") he is said to have cried in frustration.   Imagine painting over this thirty or forty times... 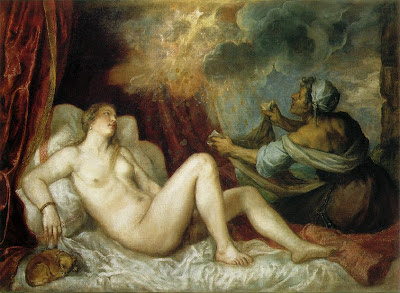 With a 'thickener' such as linseed oil (for example), the paint can be bulked up and made to sit proud of the canvas to give texture - 'impasto'.

I use liquin as a medium.  This is liquin here -

It's like wash and go for oil paint, making it manageable and giving it body. I always have a dollop of it on my palette, and cover it with an upturned pot when I've finished for the day so that it doesn't dry out.  You can see it on my palette as the glossy looking patch in the middle of the bottom right quarter of the palette.  The pot that I cover it with is at the top right next to the bowl of turps (which is largely just for cleaning brushes). 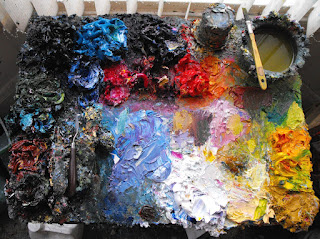 A dollop last for a long time, and I don't use huge amounts (as you can see by the ratio of the vast mountains of paint to the small bit of liquin!!), it's just for when I feel it's required.  So there's no set 'recipe' or particular set of circumstances for using it.

I can mix it with oil paint to form glossy textural paint, or I can then dip into it, and use a small amount of paint and a large amount of liquin, so that I can have a transparent glaze.  It's great stuff. 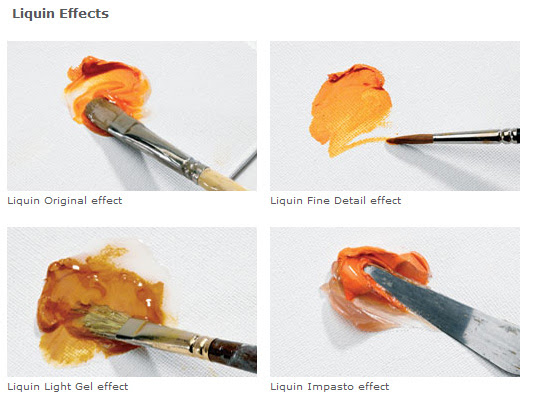 However I should say that by and large, I tend to use my oils as they are, and not mess around with any sort of mediums.  You get to know how to make the paint work for you with different tools and how it responds when you apply it to the canvas with different mark-making actions. The liquin is purely there as an occasional supplement to help me do what I want to do with a particular passage of paint, because that's what works for me.

It may work for you too. You'll just have to try it for yourself and see.
Posted by Judith at 05:04