How Modern is Modern?

Just for a bit of Friday fun, take a look at these six landscape paintings, and have a guess at who painted them and when, based purely on what you see and how the paintings are painted.

Have a close look at the way that they're painted - the brushstrokes, the colours.  Can you see the brushstrokes?  Do the paintings look 'real'?  Or are the pictures more 'pattern making'?  I've put in some ideas to start you off, but look for yourself and make up your own mind.

What order would you put them in for date, starting with the earliest?  Answers are at the bottom!

Painting 1
Now, the houses look like quite flat geometric shapes arranged in the landscape here, with the curve of the rainbow adding to the feel of something out of a geometry set....

Painting 2
It's quite similar to what's going on here, except the houses feel a bit more three dimensional....

Painting 3
This seems to be a painting about nothing, or all about texture - it's just a wall.  At the top there's a block of plain flat white and plain flat blue.  Where's the focal point?  It's all quite flat...

Painting 4
Here's those flat blocks of colour again - you're led into the painting, but what's it about?  Where's the focus of the painting?  There's a sense of depth, but it's just blocks... 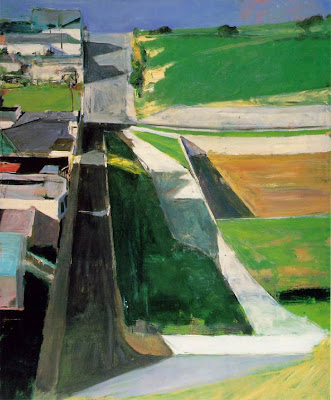 Ah, here's something more realistic...but it is also painted loosely, so you can see the brushstrokes, how it is made.  There's a high viewpoint, so you're looking down on the girl, almost spying on her, and there are bright dabs of colour as the light catches the leaves, and blue shadows. 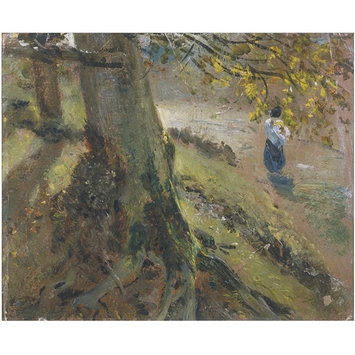 Painting 6
It's almost the same picture, a girl in a wood, but less colourful, more browns, perhaps more 'realistic'? 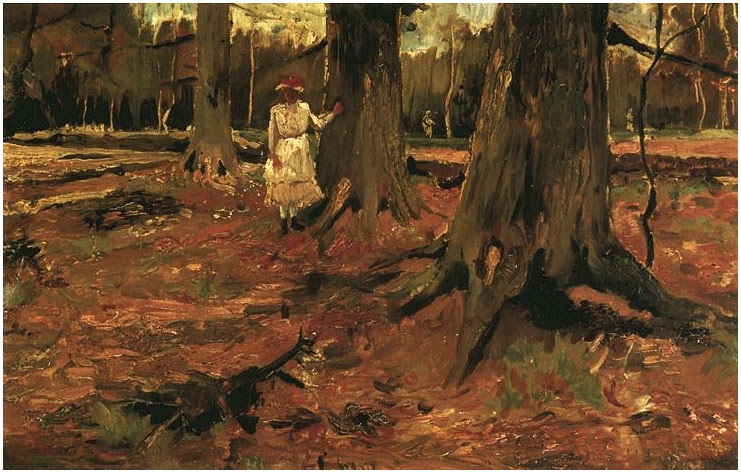 
Ok, here's the order they should be in, starting with the oldest.

(Want to read more about this painting?  Look here)

Next are these, 40 years later, from 1821.  It's Mr Haywain himself, John Constable, looking more impressionist than the Impressionists (admittedly, they're sketches rather than finished paintings, so the brushstrokes are looser and more fluid, but wow....)

Then 60 years later, it's the father of modern painting, Paul Cezanne.

Paul Cezanne, Houses in the Riaux Valley near L'Estaque (Oil on cavas, 1880)

Yes, the Impressionists get all the credit for painting outdoors on the spot, but others were there before them.  There's Constable out and about in the 1820s, and Salvator Rosa was painting outdoors in the mid 1600s, over 200 years before Cezanne strapped an easel to his back.

Then it's Vincent Van Gogh, again 60 years after the Constable painting of a girl in a wood, and strangely looking less 'modern'.

And lastly it's forward 80 years to this painting by Richard Diebenkom, but is it really any more 'modern' in style and subject than Thomas Jones's painting nearly two centuries previously...? 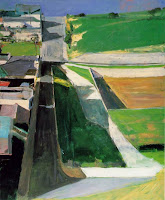 The thing is to learn to just LOOK, really look at a painting, without any preconceptions....