Fingers crossed as the last of the paintings for my big London consignment dry.

Thanks to my liberal use of impasto, some areas are refusing to cure.  Obviously, I don't frame them until they are touch-dry (otherwise they'd stick to the insides of the frame), and the temperature in the studio has been a bit chilly.

So I've brought the last magnificent seven back home so they can spend the weekend relaxing in the heat, and, hopefully, drying.

Here's a couple of the reprobates... 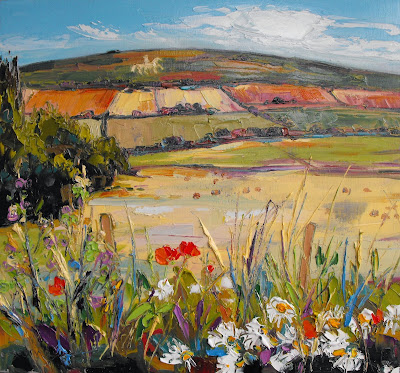 Now, the Chalk Figure near Weymouth painting is rather interesting.

Driving past in Dorset this summer, my attention was caught by the rather lovely chalk figure on the hillside.  I love chalk figures - the Long Man at Wilmington in Sussex is one of my favourite, and one that I'm familiar with, but I hadn't seen this one.  So I stopped the car and took a whole series of photos from various points at the edge of the fields.

Later on during my trip round the south coast of England, I was at the Towner Art Gallery in Eastbourne.  There I was lucky enough to see Eric Ravilious's painting of exactly the same scene.

It was interesting to see how he had exaggerated the line of the hill, enlarged the figure to make it more dramatic and prominent, and had interpreted the lines of the hedges and field patterns, making them more sinuous.

I love his chalky-looking work, as it very much reflects the quality of the landscape which he lived in and recorded.  It was really exciting to see the picture, and to think that I'd been to the same spot that he'd painted from.

You can read more in my blog here.